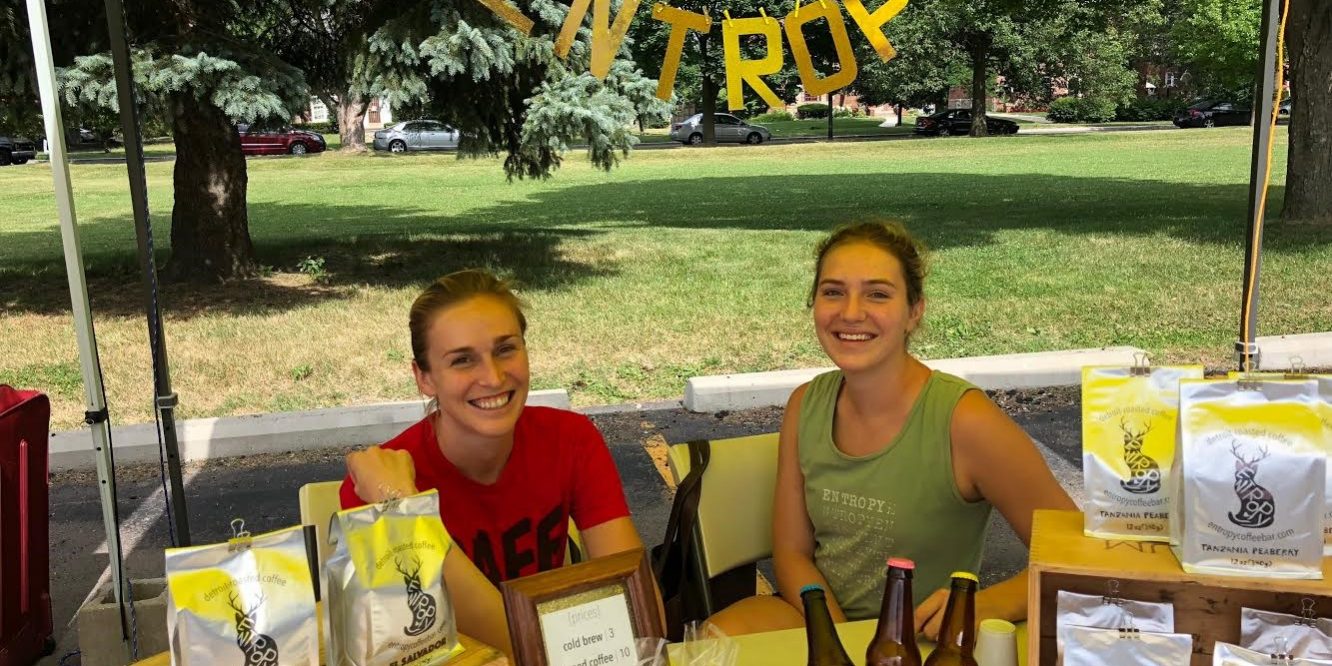 Entropy Coffee Bar is the newest coffee shop in Northwest Detroit– in fact so new that their storefront is still under construction. But renovations at their future location haven’t stopped them from sharing their coffee with the community at the Northwest Detroit Farmers’ Market this summer.

If you’ve already tried their unique flavors of cold brew at the Market, you know that recent Detroit transplants Laura Stumhofer and Margaux Holley are serious business. The two share a strong passion for coffee that they acquired in college, where they became friends on Brown University’s rowing team. But coffee wasn’t their only shared passion; someday opening a business together was an idea they floated around a bit before graduation took them their separate ways.

The Start of Entropy Coffee Bar

Soon enough Laura and Margaux found each other again in New York City, where Laura worked at a legal company, and Margaux worked for non-profits and then a yoga studio. Neither was satisfied with where they were in life, and a series of seemingly serendipitous and certainly deliberate events eventually brought them here to Detroit with their new company, Entropy Coffee Bar.

After reuniting, they visited a coffee farm on a vacation in Nicaragua, thrifted a vintage coffee machine together, and took coffee making classes in New York. They found the small business scene in New York too frenetic for their liking; Margaux explained that coffee shops usually only last a year or two there. You can go to your old favorite spot after a few months and it will be a completely different business. They didn’t want to deal with the high rate of turnover (to say nothing of the high rents and limited spaces), and so they started looking around for a new city to plant their roots in. Detroit’s blooming small business community was exciting and enticing, and the move was more manageable than a switch to the West Coast, so they decided to pack up and head to the Motor City. And as for location, they said they were more concerned about the building they would move into, so when they found an eclectic old glass factory on Seven Mile and Meyers, they moved in without thinking twice.

Laura and Margaux are mostly focused on their product over any frills. At our Farmers’ Market, they sell their coffee in simple glass bottles; three flavors are available, with a new one each week. They have straight coffee, coconut, and sometimes something more adventurous, such as cinnamon on the week I interviewed them. They even have little cookies to accompany the individual coffee flavors. Their commitment to flavor and doing something special is evident in the combination, which market-goers seem to be warming up to as the heat of summer draws on.

As for the name of their brand, and what they look to do once they get their storefront up and running, there’s a strong theme that comes through: Entropy. In physics, entropy is the process by which order irreversibly becomes disorder as energy is used in a closed system– imagine how dirt would pile it up if you couldn’t put it in the trash or move it outside, but only sweep it around. They explained the name choice as coming from the major role of entropy in the coffee making process, and they see the concept as a consistent feature of their business. So, just as coffee is subject to entropy, so their coffee bar could evolve to include other ideas. They plan to focus on just the coffee at first, letting the possibilities follow with time. Turning the space into a gathering place for evening events, or maybe even getting a liquor license are some possible moves they see happening down the road. But for now, the hope is to keep renovations moving and get the store officially open by next summer.

Another way these women demonstrate their particular vision is through a simple, stop motion video on their website. It shows a mermaid Barbie doll and a squirrel stuffed animal drinking a freshly brewed cup of coffee after an unseen person leaves the room. They freeze again as the door opens, a la Toy Story, and the Entropy Coffee Bar’s antler-cat logo comes onto the screen. When asked, Margaux told me that they created the video to make things a bit more interesting. She was inspired by a yoga studio she knew back in New York that had a similarly strange video. The two made the video in their New Center residence, and it’s certainly homemade looking, but in the best way possible– like their rustic, yet polished Instagram posts (@entropydetroit). The video tells the viewer and the customer that the coffee, like the video, is magical. Laura and Margaux know this, and have devoted themselves to it, and hope to keep sharing it with market-goers this summer.

Where to Find Them