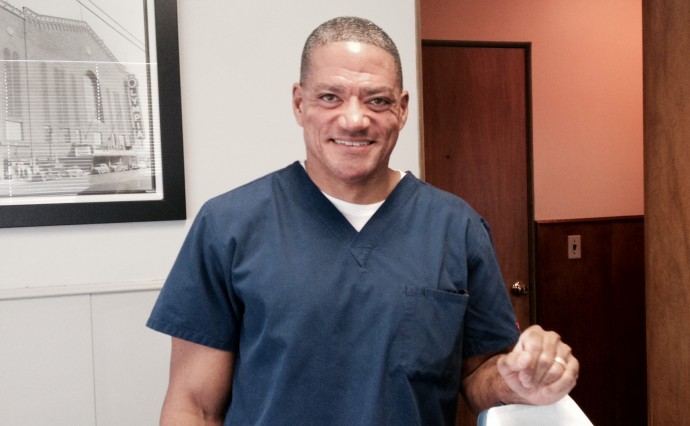 Before he earned the title “Doctor,” Michael Hudgins was a kid growing up on Grandmont. He remembers growing up watching movies with his parents every Friday and Saturday night. His mother was a fan of Sir Graves Ghastly, so Dr. Hudgins’ knowledge of all types of movies, both new and old, is pretty vast. As a young man at Cass Tech High School, Dr. Hudgins’ first career choice was sportscaster. He learned pretty quickly, however, that there wasn’t a lot of stability in sportscasting. Dr. Hudgins’ dad was in the record business, and Dr. Hudgins saw first-hand how easily someone got fired, and how quickly fads came and went. Luckily for him, he had the smarts to go along with his desire to pursue a career in health care.

Upon graduating from the University of Michigan Dental School, Dr. Hudgins began work at Diamond Dental, just a few blocks east of his current office on Grand River. After a few years with Diamond Dental, Dr. Hudgins learned of Dr. McLaughlin’s retirement and of the availability of the dental office at 19001 Grand River at Warwick. Dr. McLaughlin was so impressed with Dr. Hudgins that within months of his retirement, Dr. McLaughlin not only sold Hudgins his office, but he also recommended all of his patients to the younger dentist. Many of Dr. Hudgins’ clients have been coming to this location at 19001 Grand River for dental care their entire lives.

Dr. Hudgins opened his office in 1998 and he has no plans on leaving. “It’s nice to take care of the people who live in the neighborhood,” Dr. Hudgins says. “That’s a nice feature of this job and location.” His parents still live in the area as do his wife’s. “We’re both close to family, and this is home.” Dentistry has been an important part of Dr. Hudgins’ life in a variety of ways. In fact, it was a dentist that instigated the marriage of Dr. Hudgins and his wife. Many years ago now, Dr. Hudgins’ dentist asked him if he was dating anyone. The dentist’s son had a first grade teacher who was, according to Dr. Hudgins’ dentist, “A lovely woman.” Dr. Hudgins agreed to a blind date, and a match was made.

While Dr. Hudgins doesn’t offer matchmaking services, he does offer excellent dental  care for his patients. Dr. Hudgins welcomes children as well as adults, and if you’re lucky, you might just get a recommendation for a great movie. To make an appointment contact Dr. Michael Hudgins at 313-838-6679.