Connie Obelnicki: A Lifetime of Teaching Others the Joy of Music 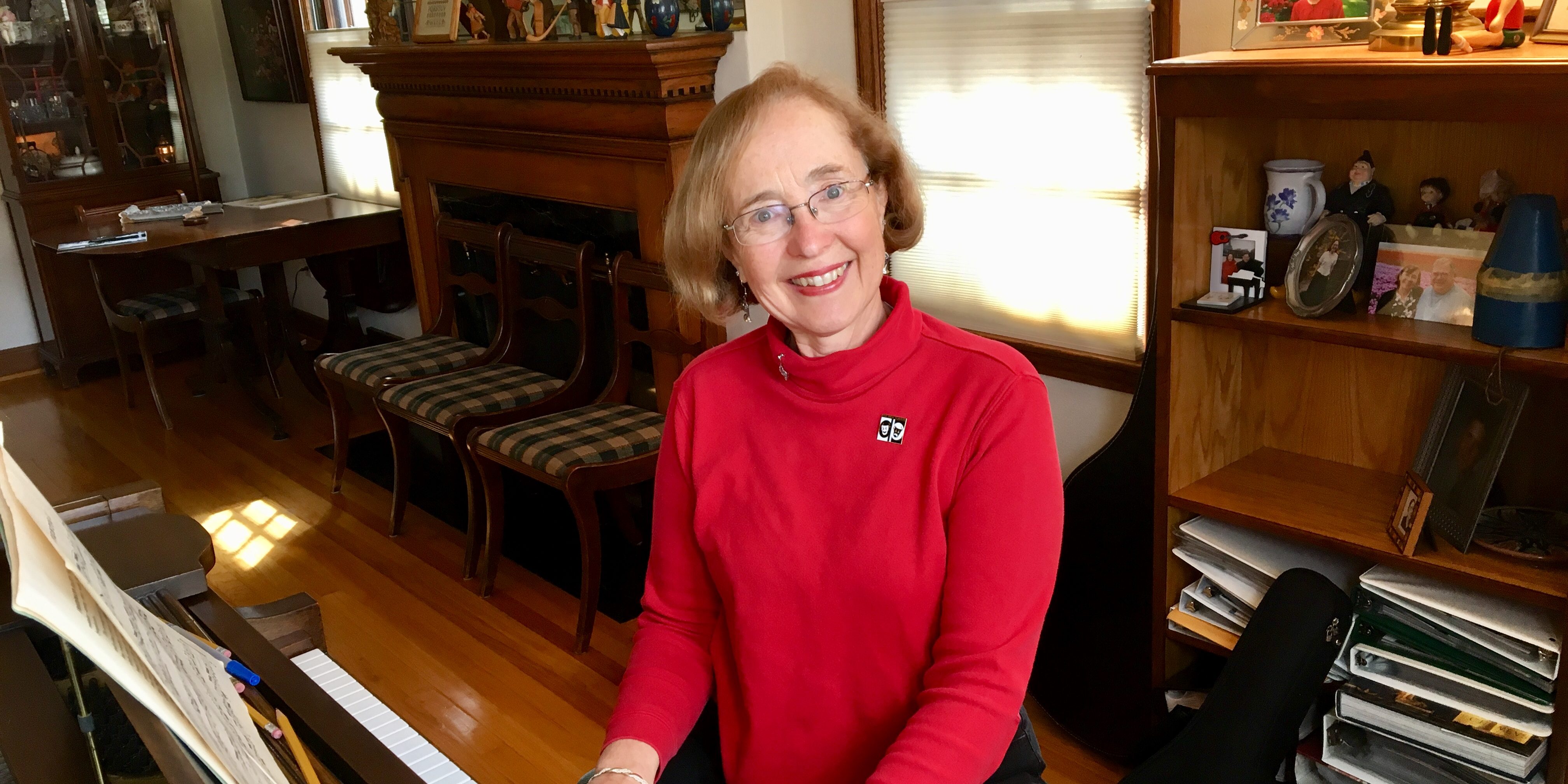 Connie Obelinicki never knew her mother who died of a brain hemorrhage just before delivering a four pound Connie, but Connie’s inheritance of a spinet, the sheet music of an accomplished pianist, and a love of music, has directed Connie throughout her life.

Connie started taking lessons on that spinet in about the second grade, and Connie quickly fell in love: “You never had to tell me to practice.” Connie started on piano, and later learned French horn from her Crestwood High School band director, Joseph Remington, and eventually earned a Bachelors and Masters degree in music education at Eastern Michigan University. She also played the glockenspiel in marching band, and dabbles in guitar.

Connie and her husband Frank moved to Grandmont Rosedale in 1974. They moved from a small flat on the East side and were thrilled with the space they now had, but they had little furniture for several of the rooms of their new home. There was no furniture in their living room at all until Connie came home one day to find a baby grand piano waiting for her in the living room. Connie’s husband Frank had bought it for her. “I have a wonderful husband,” Connie says.

Connie’s first students were kids in the neighborhood who came to take piano lessons. Connie would line up some chairs in her living room for the recitals. Next Connie began teaching elementary vocal music in the West Bloomfield school district. In her 33 years as a vocal music teacher, Connie learned a great deal about how to make learning fun. “Oh, we had a good time! If I didn’t have fun doing it, we didn’t do it!” For 33 years, with the help of equally dedicated fellow teachers, parents of students and students, Connie organized themed concerts: a 1890s Music Hall Revue, We Are Family, Teeth (“a dentist dad in the audience loved that one!”), Stone Soup, the Science of Sound, and Connie’s favorite: Peter Rabbit. “Every kid had a costume and a role to play such as cabbages, carrots, and Peter himself.” Connie was the director, musician, program organizer, advertising department, and the choreographer. Connie also took her students to nursing homes, the mall, and the Henry Ford Museum where, dressed in T-shirts that they designed and Connie had made, they would sing Winter holiday music. Connie figures that she taught 400 kids a year for 33 years. While some of those kids were lucky enough to have Mrs. Obelnicki as their teacher for several years, that’s still around 10,000 kids who learned that music was fun and meant to be shared.

For years Connie has also organized the annual sing-a-long at the Grandmont Rosedale Holiday Breakfast in December. She remembers to bring jingle bells and some extra antlers to get the crowd involved. Upon retiring, Connie got involved with Grandmont Rosedale’s community theater group, the Park Players. When they were little her three kids were introduced to music. Mary and Anne played piano, and Frank the trumpet. Later Mary played French horn at Renaissance High School.When Connie started helping with the Park Players’ production of “Beauty and the Beast,” she “very casually suggested to her son Frankie that he might think about trying out.” Connie admits that she “knew he could sing, and I knew the music was his pitch.” Frankie did try out and landed the role of Cogsworth the Clock, and, according to Connie “has been hooked on theater ever since.” Connie’s daughter Anne is a contra dancer – a type of folk dancing that involves long lines of dancers who spin and weave often to fiddle music and a caller.

Several years ago Connie started bringing bags of song sheets to a senior center where her aunt was active, and to the nursing home where her Uncle George lived. “Everyone had favorites!” Connie says. “One resident was unintelligible unless he sang, and when he sang he wasn’t just understandable – he was a lovely singer!” Connie became a regular part of the schedules at the senior center and at the nursing home. 25 – 30 people would come each week to sing together. “It was fun!” Connie remembers.

SINGING TO HER GRANDKIDS

Connie doesn’t visit the senior center or the nursing home as much as she used to. Lately she’s been focusing her attention on her four (and one on the way) grandkids. “Oh, I sing to them all the time!” she says. “I buy them books that are songs: ‘This Old Man,’ ‘Old MacDonald.’ All those years of teaching vocal music got me ready to be a really great grandma!” When she’s not singing or playing the piano, Connie quilts, but she’s never very far from music. For her one year old grandbaby she made a colorful quilt that features “Baa Baa Black Sheep,” “The ABCs,” and “Twinkle, Twinkle Little Star.” “Can you see the three songs?” Connie asks, “They’re all the same melody – written by Mozart! It’s the same melody – an old folk song that Mozart used for his 12 Variations for piano.”

While Connie’s mother was never able to sing to Connie or Connie’s children, she did indeed pass down a love of music. And Connie in turn has taught thousands of others to love music, and perhaps most importantly, to share music with others. That’s quite a legacy for both Connie and her mother.