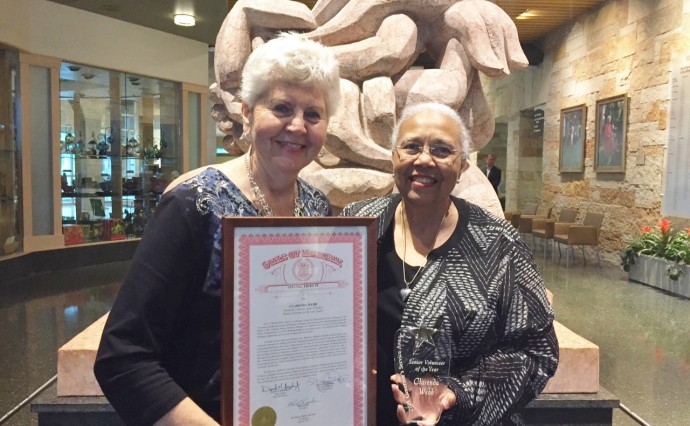 “It was a real shocker!” Clarenda Webb says when she describes her reaction to finding out she had won the 2015 Governor’s Service Award. Clarenda attended the Governor’s Service Award banquet in June at Meijer Gardens in Grand Rapids where it was announced that she had won the award for the Senior Volunteer of the Year. There were four other nominees, so Clarenda’s surprise at winning was genuine. Typically Clarenda, she emphasizes that not only were all the other candidates “just terrific,” but that she accepted the award “on behalf of all the wonderful volunteers in the Grandmont Rosedale community. This is really an award for all of us.” Clarenda’s dedication to Grandmont Rosedale is matched only by her humility and reluctance to be singled out.

Clarenda moved into Grandmont Rosedale in 1976 and immediately joined the North Rosedale Park Civic Association. Clarenda served on many committees with the civic association and soon became the neighbor that went out of her way to welcome newcomers and to keep others informed about what was happening in the neighborhood. Clarenda was retired just one week from her position as a behavioral health social worker with the Henry Ford Health Systems in 2008 before she won a seat on the board of the North Rosedale Park Civic Association.  Since her “retirement,” Clarenda puts in about 30 hours a week volunteering with GRDC on the Crime Prevention Task Force, the Vacant Property Task Force, the various clean-up events, establishing relationships with the police department and our District #1 partners, code enforcement, and raising funds for the various programs. While her energy and commitment may seem unusual, to Clarenda it’s simply how she was raised.

As a kid growing up on the East side of Detroit, when Clarenda went with her mother to the grocery store, she first stopped by her elderly neighbors’ houses to see if they needed anything. Clarenda took their orders and headed to the store with her mother. Once when a neighbor gave Clarenda 25 cents for her time and effort, her mother told her to “Give that back. You help your neighbors and family. That’s just what you do.” Clarenda has certainly learned that lesson, and she has been a beautiful example of that same generosity of spirit.

If you live in Grandmont Rosedale, you know Clarenda. The next time you see her, congratulate her on her award, and tell her thanks. She’s a big part of what makes living in Grandmont Rosedale so wonderful. As the Governor’s office states, “By helping residents help themselves, Clarenda is making sure her neighborhood will remain self-sustaining for generations.”

The above photo is of Nancy Bitzarakis and Clarenda at the award ceremony.