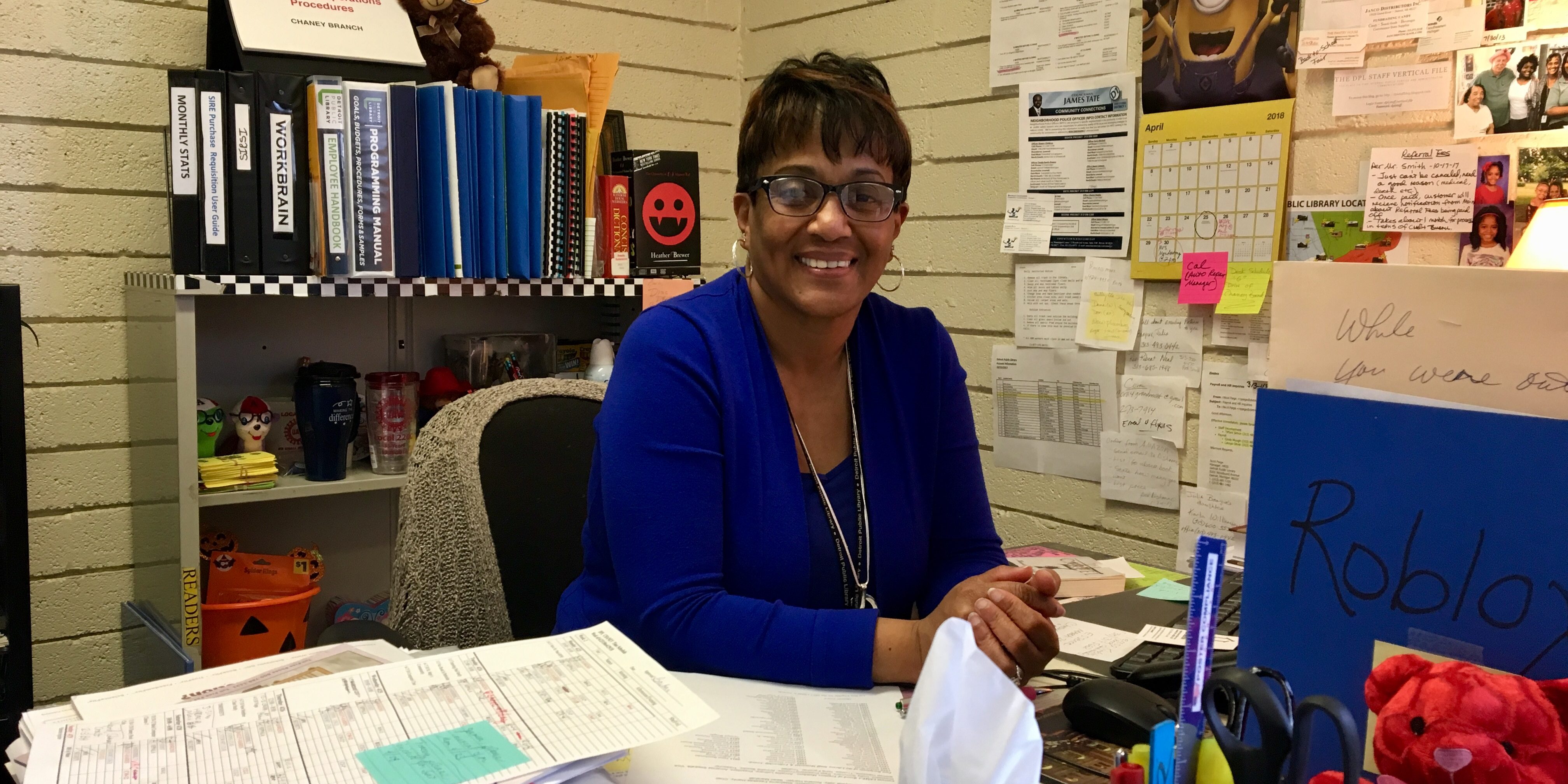 When Barbara Jo Parker-Hawkins was a little more than six years old she knew what she wanted to do with the rest of her life. She never changed her mind, and she has no regrets.

Growing up near Grand River and Livernois, Barbara Jo remembers walking with her three older sisters to the now closed Richard Branch of the Detroit Public Library every Saturday to check out new books. “I loved going to the library,” Barbara Jo recalls. “Our mom would tell us to be home at a certain time, and we’d spend most of the day there. I especially loved listening to the librarian at story hour. I knew then that that was what I wanted to do.”

Barbara Jo began her library career in high school as a page at the Main Branch in 1975. After high school, Barbara Jo attended Wayne State, eventually earning a Master’s degree in Library Science. Barbara Jo has worked with DPL as a librarian since 1989 with a short stint as a media specialist at a high school in Inkster. Barbara Jo has worked as a Children’s Librarian, an Assistant Manager, and most recently as Manager and Children’s Librarian at the Chaney Branch, 16101 Grand River, one of the libraries many Grandmont Rosedale residents call their home library. Throughout her career, Barbara Jo has become familiar with several libraries. She has worked at Douglass, Hubbard, Sherwood Forest, Main, Chase, and Chaney. No matter which branch she works at though, Barbara Jo is in her element, and she sees her role as a librarian to create “a welcoming, inviting place to be.” As the Manager at Chaney, Barbara Jo makes it a point to encourage her staff to join her in making the library a place where people feel welcome, as if it is their library, their second home – just as she felt as a child. “I ask my staff to greet everyone who comes in. The custodian, the guard, the librarians – I ask everyone to give it all they got in terms of service.”

LIBRARIAN OF THE YEAR

Barbara Jo feels that this welcoming atmosphere contributed to one of her regular patrons landing a job with the help of the staff at Chaney. “Our staff helped him with his resume and his computer skills. He was very grateful.” This spirit of generosity and genuine helpfulness has not gone unnoticed by either her patrons or her peers. This year Barbara Jo was awarded Librarian of the Year by her fellow Detroit Public librarians. She was honored with a banquet and the inclusion of her name on the list of past Librarians of the Year that hangs in the magnificent Adam Strohm Hall on the third floor of the Main Branch. This award dates back to 1950 when Adam Strohm Hall was named after the first library director to work at the Main Branch.

While it’s always nice to be recognized for hard work, by city-wide librarians, Barbara Jo is very happy managing Chaney. Chaney is on the list for renovations which Barbara Jo hopes will include a few more computers. “People come here every day to use the computers, check out something to read, even just to chat with friends, and there are several kids who come here to do their homework.” In a survey put out by the Main Branch asking library patrons about their experiences at the various branches, Chaney regularly receives top marks. Barbara Jo is proud of this, and it is deserved. Clearly she and her staff have succeeded in creating “a family feeling” at Chaney.

Several years after Barbara Jo spent her Saturdays at the library finding good books to read and listening to the librarian read at story hour, she got a call from the administrator at the Richard Branch, the branch she went to as a little girl. The librarian who usually ran the summer story hour needed someone to fill in, so could Barbara Jo step in? “I can’t tell you the thrill I got,” Barbara Jo says, “I actually cried when I walked in. I couldn’t wait to do it over and over again, all summer long.”

Several Detroit Public Library Branches, such as the Redford Branch, have undergone renovations that include new and more computers and new furniture. Some branches have been granted additional funding to run new programs such as the Prime Time Family Reading Time which is a reading program that involves entire families and includes dinner. The hours at several branches have been extended. The future looks bright for the Detroit Public Libraries, and if you visit the Chaney Branch, you can expect a warm welcome.

To find out all that’s happening at the Chaney Branch, check out their website: https://detroitpubliclibrary.org/locations/chaney or you can give them a call at 313.481.1560.