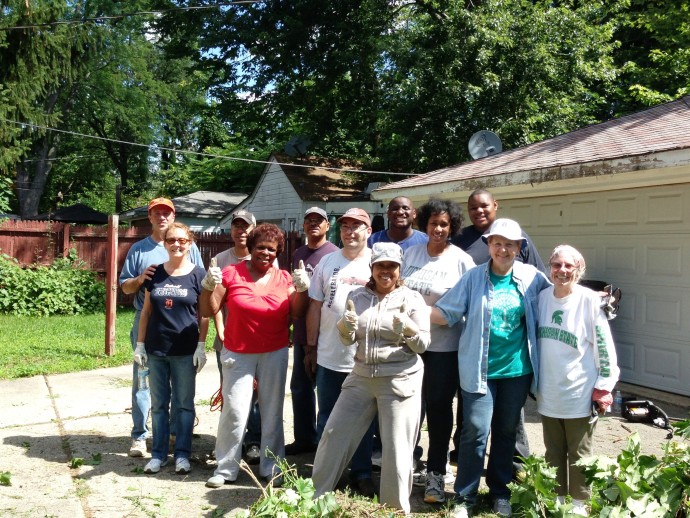 This past Saturday, August 3rd almost 40 volunteers came out to participate in the 7th Annual ARISE Detroit! Neighborhoods Day in Grandmont Rosedale.  Two sites were targeted in Rosedale Park and North Rosedale Park, both focused on vacant property maintenance. The two clean-up activities were organized by members of the Vacant Property Task Force led by Clarenda Webb and Nancy Bitzarakis.

Neighbors, block captains, task force members and even former residents who have moved out of the community came together for the daunting task. Volunteers worked from 10 until 1 p.m. clearing the back yards of four vacant homes of trees, overgrown grass and tall weeds. In total, there were 37 volunteers, 166 volunteer hours donated, 7 trips to the Southfield dump, over 100 yard waste bags filled and cleared, countless tools donated for the day and many happy neighbors. One volunteer, Ms. Akins helped out at the Rosedale Park cleanup and went and finished the day at the North Rosedale Park site!

Nancy Bitzarakis felt a sense of joy working on the largest cleanup she has participated in, in the neighborhood stating “When I think of what a demoralizing eyesore that abandoned home was.  When I think of good, dedicated neighbors who want to move out of our area when they have to look at an eyesore like that every day.  When I think of how hopeless it can feel to live near a home like this –  that has just been left….I am proud to be a Rosedale Park resident and proud to be with other Detroit residents of the kind that almost no one realizes are here.  When others read stories about Detroit in the newspapers and on TV, they don’t realize that Detroiters like this, are here also.”

SEE THE BEFORE AND AFTER PHOTOS HERE!