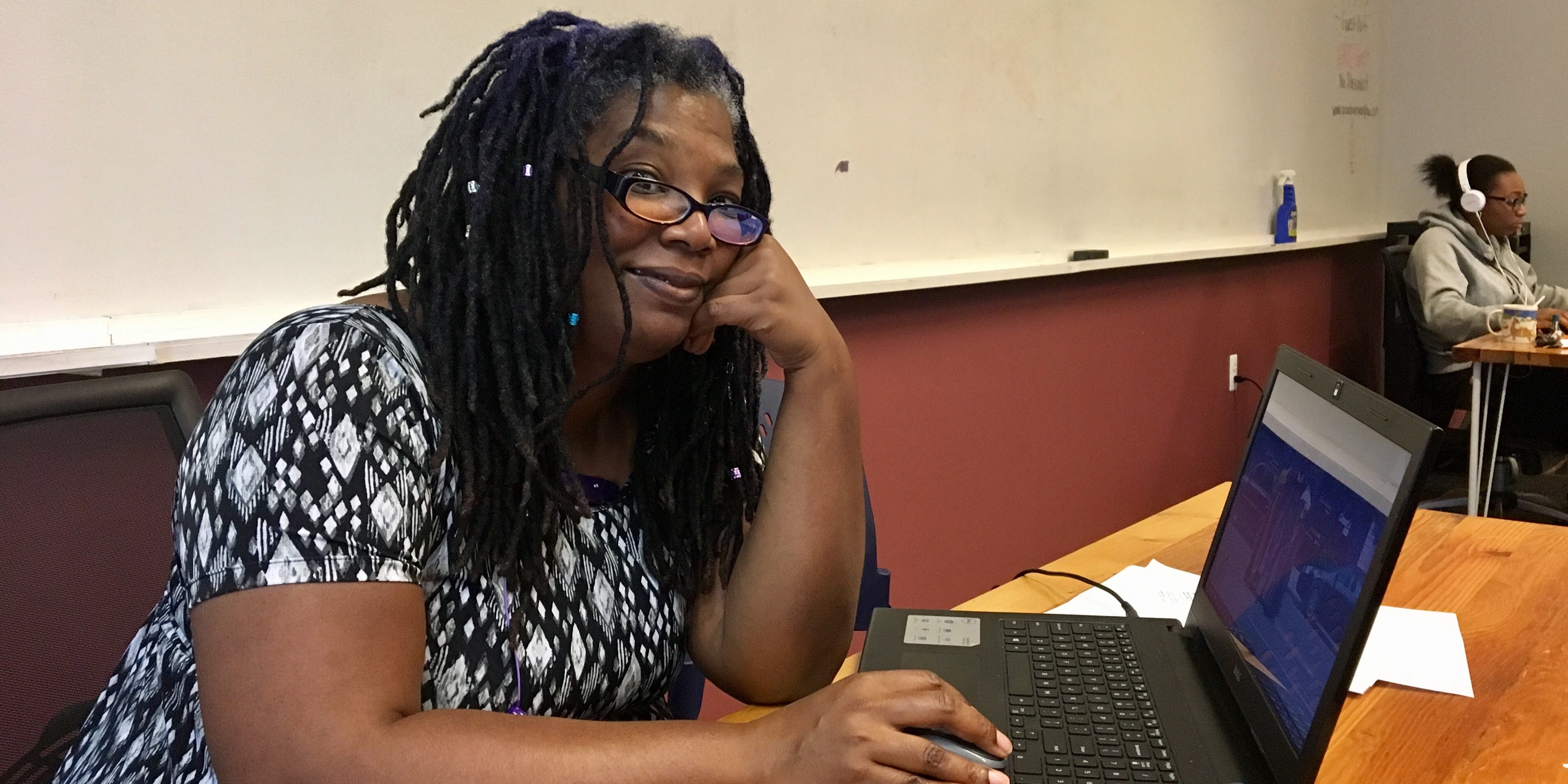 If your business is in need of a marketing boost, you might want to talk with April Smiley. Whether your intention is to promote, educate, or entertain, April can create an effective visual representation of what your business has to offer. April has a versatile skill set: she is an experienced film maker, editor, writer, and producer. April also provides photography services such as headshots for promotional material, resumes, and auditions. Like several other small businesses, April runs her Amethyst Media Productions out of the Grand River WorkPlace and it has proven to be the perfect match.

April has a great deal of experience in the many aspects of film production. She wrote a  commissioned Christian play, filmed a commercial for Everything Detroit, the Detroit-themed retail store just down the street from the WorkPlace at 19566 Grand River, and did a photo shoot for Nicole and Chanel, the owners of the WorkPlace pop-up shop Voluptuous Bien’ Aime Boutique. April also has several of her own projects. Her short comedic film “Waffles” was turned into a stage play and performed as a preview before The Vagina Monologues at the International Institute in Detroit just last year to rousing audience response. April is currently working on a web series that is set to shoot in September, and she is working on a film and stage production of her play “Coffee Wars.”

The WorkPlace as a Creative Space

Apart from working with individual clients directly, April also hosts workshops to help small businesses use social media and video most effectively. These workshops take place at the Grand River WorkPlace, where April says she was inspired “to get way more serious” about her own business. Keeping one’s focus on the long and often arduous process of creative projects like April’s requires discipline. April says the WorkPlace has been instrumental in providing her the space, literally, where she can focus both on her commissioned work and on her own projects: “This space is where I can really concentrate,” she says. While at first glance having one’s office at home can seem like an ideal situation, having an office at home can also encourage distraction and interruption. For many members, the WorkPlace provides the perfect place to get work done in that it is no one’s home and yet it is a shared space where everyone works on their own business.

Since becoming a WorkPlace member over a year ago, April has taken advantage of several of the workshops offered at the WorkPlace, and has found them to be very beneficial. She joined a women’s business association she learned about through the CEED lending program which has a consistent presence at the WorkPlace. April happened upon a ProsperUs small business training program one day when she came to work. She joined the class and was immediately grateful for the information. Even the FoodLab workshop on the importance of pitches has proven valuable to April’s business. “I’m not a food entrepreneur, but I do need to know about pitching,” she says. “When I see a workshop going on, I don’t hesitate, I join in. I think ‘What am I going to learn this time?’”

Script Writers Gather at the WorkPlace

This shared workplace has led to the wide and interesting variety of uses and it encourages collaboration among its members. April has used the WorkPlace conference room to do a table read of one of her scripts. The Detroit Script Writers Group, of which April is a member, meets every third Thursday in the WorkPlace conference room. When April’s script writer colleagues come to the WorkPlace, she tells them about all the great clothes for sale at Voluptuous Bien’ Aime Boutique. April is also working with Katrina Brown, owner of Everything Detroit on a design for a production t-shirt for a coming film project. April plans to have Chanel from the boutique bling one or two of the t-shirts. Both April and WorkPlace are busy with a wide variety of projects. April is not alone in feeling that the WorkPlace is the place to get work done. For many the WorkPlace is within walking or biking distance to their home, so the commute is pretty great. WorkPlace members share the fees for wifi, the printer, the conference rooms, etc., so the financial burden of having an office outside the home is alleviated.