The Anahata Yoga Studio is Coming to Grand River 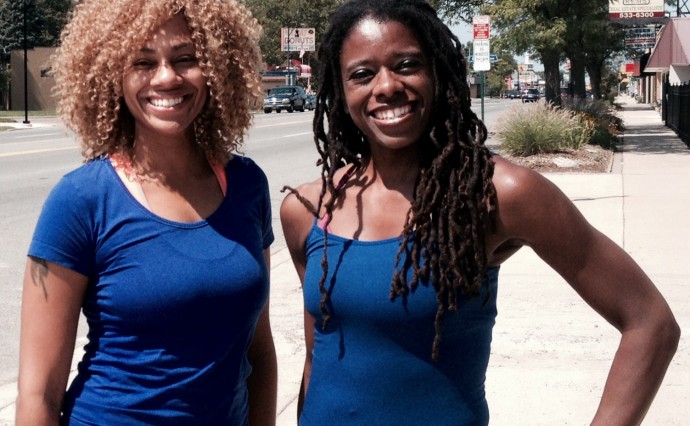 Regina Ward and Nicole Martin are old friends.  Years ago they were roommates and worked together at a music store.  Different life decisions led them for a while on different paths.  They lost touch for 10 years.  Yoga (and Facebook) brought them back together.

When they found each other again, they also learned about REVOLVE Detroit, a program with the Detroit Economic Growth Corporation that partners with community organizations such as GRDC to, according to REVOLVE, “activate vacant storefronts with transformational businesses.”  Both women knew how yoga transformed their lives, and after reacquainting, they thought they might bring their experience as trained yoga instructors to their hometown.  As Nicole says, “We thought ‘Should we do this?’ And then pretty soon we thought, ‘We should do this.’”  They applied to become one of the new pop-up businesses in Grandmont Rosedale, and won.  REVOLVE helped the women develop a business plan and their website.  “The space on Grand River opened up, and the timing worked out,” says Regina.  The Grand Opening for Anahata Yoga, Grandmont Rosedale’s newest pop-up business, is Saturday, September 20 at 19560 Grand River.   Regina and Nicole are offering a free yoga class on the 20th which will begin promptly at 10 am.  The doors will close at 10:15 am and then reopen at 11:15 am.

In 2000 Nicole took her first yoga class and remained curious about the physical and mental benefits of yoga.  Eventually her curiosity became a regular yoga practice.  She received training as a yoga instructor and still works at Oakwood Physical Therapy and Wellness Center. Nicole grew up not far from Grandmont Rosedale and is very pleased to “bring yoga to people who might not be able to access it otherwise.”  Nicole’s belief in the extensive and varied benefits of yoga is personal:  She credits yoga with helping her cope with depression, adding “I think it’s important to share how it has helped me.”  Nicole is very much looking forward to sharing her experience as someone who has benefited from yoga with the Grandmont Rosedale community.

Regina echoes Nicole’s perspective on the many positive qualities yoga offers.  “It’s more than physical.  Yoga is not just about poses.  It also encourages you to face yourself.”  Regina is also a Zumba and High Intensity Internal Training instructor as well as a trained yoga instructor.  She has been practicing yoga “all my life”.  She remembers her mother introducing her to yoga poses when she was just a kid.  “My brother and I would make fun of it, but we’d do it.”  Eventually Regina felt the benefits of yoga and began a regular practice.

Anahata means “the heart”.  It’s the fourth chakra.  The Anahata Yoga studio offers Hatha yoga, a gentle kind of yoga that offers instruction on meditation, breathing, poses, and relaxation techniques.  Nicole and Regina welcome those with yoga experience and those who have just read the words “chakra” “hatha” for the first time.  You can visit their website, http://www.anahatayogadetroit.com/ for class days and times and to find out more about how yoga can change your life for the better.