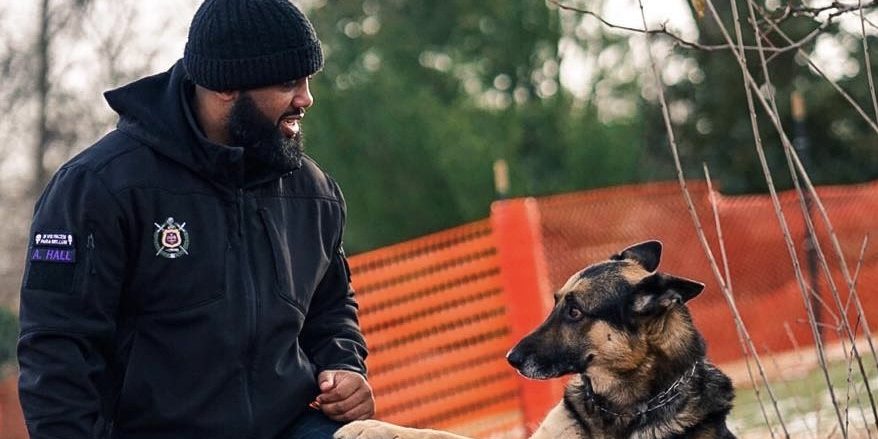 Aaron Hall started his business, Motor City G.S.D (German Shepard Dogs), at Grand River WorkPlace, 19120 Grand River, about four years ago, and business has been good. So good in fact, that Aaron is looking for his own storefront, preferably somewhere close by so that he can continue “living and working in Grandmont Rosedale.” Motor City G.S.D. is an all-around dog acquisition and care business. If you are looking for a particular breed for your family with small kids, let Aaron know. If you’d like some help training your unruly dog, call Aaron. If you’re going out of town and need to board your dog, yep, Aaron’s your man. His business also includes dog grooming, dog walking, and help with AKC certification. “It’s a one stop shop for all things canine,” says Aaron. Aaron’s relationships with breeders and trainers, and his own love for dogs all contribute to the success of his business.

Ever interested in learning more about dogs and how to make his business an integral part of community, Aaron recently contracted with River Rouge Schools to work with eight school employees to help them train dogs to be therapy dogs in a 10-week program. These therapy dogs will be used in the schools with students. Aaron is also a student himself. Schutzhund, a competitive dog sport that tests a dog’s tracking, obedience, and protection skills, is a sport that, according to Aaron, has traditionally been “a sport for the wealthy and white.” Aaron is in training to be a helper – the one who the dog bites. Aaron has protective gear, so don’t worry. As a helper, Aaron is learning how to analyze dogs, to evaluate traits and characteristics needed in a good working dog. Because he enjoys working with dogs and because there was no Schutzhund in Detroit, Aaron started Schutzhund in the D and very recently received a grant to involve at-risk youth in the art of dog training. Aaron will introduce this competitive sport to Detroit teens and to the city of Detroit.

GROWING UP IN GRANDMONT ROSEDALE

Surprisingly, Aaron did not grow up with a dog. Growing up in Grandmont Rosedale, Aaron asked his parents every year at Christmas for a dog. And every year he got a stuffed dog. The first dog he really got to know belonged a high school girlfriend, or her dad, to be exact. It was a German Shepard, a retired police dog. “He was my guy,” recalls Aaron. “I spent most of my time with that dog. I walked him, played with him – he was mean to everybody but me.” Maybe not surprisingly, the girlfriend didn’t last, but Ajax the dog, remains Aaron’s inspiration. Today, Aaron has Sasha, an 11 year old German Shepard, that he got himself when he was in college, about the time he first learned about Schutzhund.

Many people might know the name Aaron Hall and associate it with District One, or maybe Councilman James Tate. Aaron is Detroit City Council District One Liaison, the father of two, and as he says “second grade teacher, day care provider, and personal chef.” He’s also the owner of two color-coded calendars to help keep all the balls in the air.

Motor City G.S.D. and Schutzhund in the D have outgrown Grand River WorkPlace, which is exactly the role WorkPlace was intended to play. Grandmont Rosedale Development Corporation opened WorkPlace in 2014 to serve as an affordable, neighborhood-based incubator, co-working space for small businesses just starting out. Some small businesses stay on at WorkPlace, finding the space, location, and office amenities just right for their business. Others, like Aaron’s, get their footing at WorkPlace, and then are ready to look for a bigger space. Many of the businesses that outgrow WorkPlace want to stay in the neighborhood. “I want to be part of the reason this area continues to succeed,” says Aaron. “I would love to keep my business in Grandmont Rosdale.”

If you are interested in getting a dog, dog training, grooming, boarding, or just about anything to do with dogs, check out Motor City G.S.D.: https://www.motorcitygsd.com/ and follow on social media: Facebook: https://www.facebook.com/MotorCityGSD and Instagram: motorcitygsd