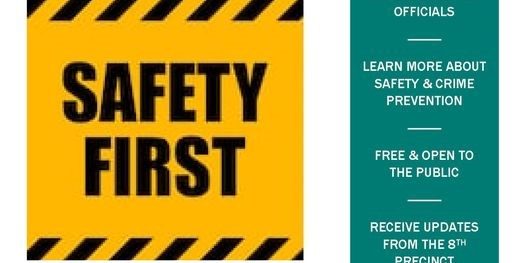 Every other month, members of GRDC’s Crime Prevention Task Force organize a Neighborhood Safety Meeting, which welcomes residents to express their concerns about crime and safety. A guest speaker and topic is chosen for the Neighborhood Safety Meeting, and relevant Detroit Police Department officials (and others) are asked to attend and participate.

On Thursday, February 24, nearly 50 people attended the Neighborhood Safety Meeting via Zoom and had the opportunity to meet Brian Harris, the new 8th Precinct Commander. Within the Detroit Police Department, Commander Harris moved up the ranks from police officer to sergeant to lieutenant to captain. He has 25 years of criminal justice experience. During the discussion, attendees were given information on how to report issues in their community. They were also able to gain an understanding of the types of issues that the neighborhood officers address.

After Commander Harris spoke and answered questions, Sergeant Johns introduced herself and the Neighborhood Police Officer (NPO) Officer Childrey. Officer Childrey is responsible for covering the whole Grandmont Rosedale area and is the first point of contact for any non-emergency crime reporting. These officials instructed residents on how to report non-emergency and emergency crimes in their neighborhoods. In the Grandmont Rosedale community, Neighborhood Police Officers (NPOs) are assigned to specific areas to work as public safety liaisons. They are in charge of solving non-emergency crimes and establishing crime-prevention strategies. You should report a crime for a variety of reasons, including filing a police report for previous incidents (break-ins, auto theft, and/or illegal dumping), reporting an abandoned vehicle, making a noise complaint, making an animal or drag-racing complaint, reporting an open fire hydrant, and reporting a cable or utility theft. To report a non-emergency, contact 313.267.4600.

Officer Childrey takes care of  Evergreen to Greenfield and from Schoolcraft to McNichols. However, there are several other NPOs that serve the surrounding areas including NPO Coleman, NPO Sharp, NPO Wesley, and NPO Reed, who were all in attendance at the meeting.  To contact Officer Childrey, call her at 313.590.5199 or email her at childreys693@detroitmi.gov. To find out more about NPOs: visit: https://detroitmi.gov/departments/police-department/precincts-and-neighborhood-police-officers.

Emergencies or crimes in progress should still be reported to 911.

Sergeant Johns announced two upcoming meetings: Coffee with a Cop on March 9 at 10 a.m., and a Public Safety Roundtable/Town Hall meeting on March 14 at 10 a.m. She also said that many DPD tickets are being thrown out and cases are being dismissed in the 36th District Court. She encouraged residents to watch court meetings on the court’s website to witness this for themselves, and ultimately, to advocate for change, if necessary.

If you are interested in being involved with GRDC’s resident-volunteer led Crime Prevention Task Force, let Becki Kenderes, Program Director at GRDC know at 313.387.4732 ext. 120, or becki@grandmontrosedale.com.