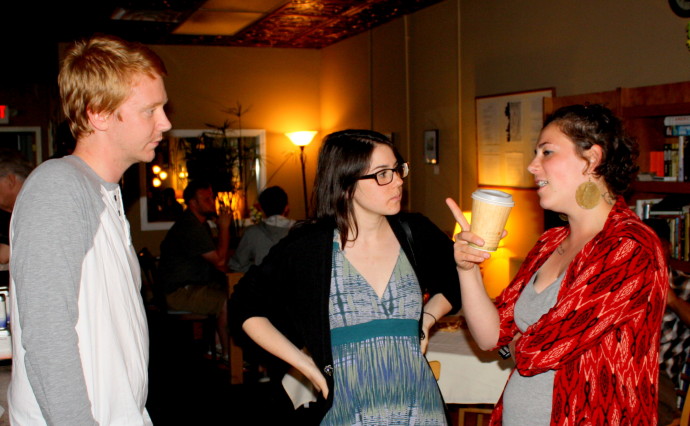 From the sweet glues of the trotters

Come the sweet kinks of the fist, from the full flower

Of the hams the thorax of caves,

Come they Lion from the reeds of shovels,

The grained arm that pulls the hands,

Always Brewing Detroit hummed with a steady buzz of conversation on the subject of art and community on Friday, June 13.  Starting at 7pm, Grandmont Rosedale artists were featured in the art show entitled “They Lion Grow:  A Detroit Art Show, Vol. III”, inspired by the poem “They Feed They Lion” by fellow Detroiter, Philip Levine.  The curation of the show was based on the themes expressed in Levine’s poetry and focused on artists living and working within the Grandmont Rosedale area.  Curator Jessica Meyer said of the show that it was “a way to give a voice to the neighborhood of Grandmont Rosedale.”

Artists were comprised of photographers, painters, and screenprinters, among others.  Martha Grimm, whose paintings feature sweeping landscapes and floral arrangements, shared her memories of taking the streetcar in Detroit and working on the Victory Garden that was on the end of her street.  Allen Williams, a comic book artist living just outside of Grandmont Rosedale, is an old school superhero enthusiast and was thrilled to have his work displayed for the first time.  Photographer Andrew Kopietz included encouraging thoughts on Detroit in his bio, “Our continued success as a city ignites when people become agents of change within their communities.  Few regions in Detroit preserve this attitude better than Grandmont Rosedale.”

Musician John J Coyle mixed classic tunes with fresh beats as the evening became a microcosm for the resiliency and innovative edge that Detroit encompasses.  Through the many pieces and personalities in this exhibit, the spirit of Detroit could be felt weaving in and out of conversations about art, Detroit, history and community.  Our faces look forward, the exhibit seems to say, but our minds are ever drawn to the challenges we face, as we are reminded by the ending words in “They Feed They Lion”:

From my five arms and all my hands,

From all my white sins forgiven, they feed,

From my car passing under the stars,

They Lion, from my children inherit,

From the oak turned to a wall, they Lion,

From they sack and they belly opened

And all that was hidden burning on the oil-stained earth

They feed they Lion and he comes.

This art show is the first in a two-show series at ABD that will showcase local artistic talent.  Another opening at Always Brewing Detroit will take place on August 15 from 7-10pm.  Jessica hopes that the title for this art show will be inspired by a poem from a Grandmont Rosedale poet.  If you are interested in exhibiting your art or performing music, contact Jessica Meyer at Jmeyer0322@gmail.com.