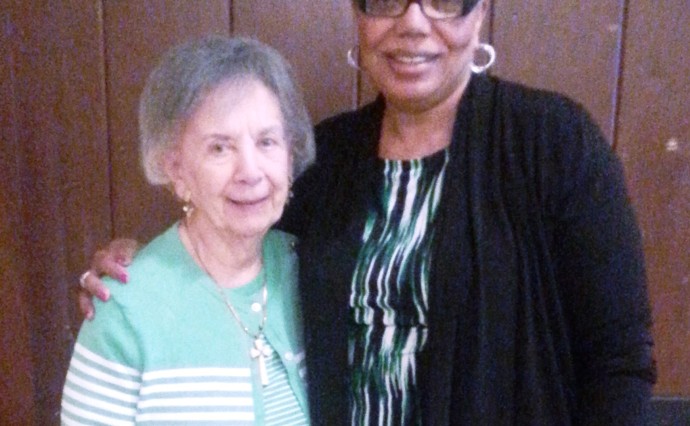 8th Precinct Captain Marlon Wilson provided encouraging crime statistics at the June 26 Neighborhood Safety Meeting:  Homicides are down 35%, Burglaries are down 29%, Robberies are down 28%, Carjackings are down 23%, Stolen Vehicles are down 19%, Larceny is down 17%, and Sexual Assaults are down 9%.  The only increase is in Aggravated Assaults which are up 8%, but Captain Wilson reported that most of these cases are domestic violence situations and that arrests in this area have increased.  The decrease overall in crime in Grandmont Rosedale remains constant.

Anthony Jones, the Corrections Coordinator and Media Facilitator from Crime Stoppers of Michigan was the guest speaker.  Jones began his talk by thanking GRDC for asking him to speak at the meeting and by telling the audience that “Citizens are our heroes.”  Jones linked the decrease in crime statistics to citizens’ vigilance.  According to Jones, Crime Stoppers offers “another tool citizens can add to their toolbox” in this community-wide effort to prevent crime.  Crime Stoppers “empowers people to make schools, neighborhoods, churches, and businesses better through the anonymous reporting of crime.”  Citizens are strongly encouraged to call in tips to Crime Stoppers.  Crime Stoppers goes to great lengths to insure the anonymity of the callers.  In fact, courts cannot subpoena anyone who gives a tip, and law enforcement and phone service providers do not know who is calling and are not allowed to listen to calls.  Even those who work for Crime Stoppers do not know the identity of the tipsters.   Tipsters are given PIN numbers.  No names are used, and the tipsters do not leave their numbers.  Crime Stoppers cannot return phone calls as they do not have access to tipsters’ numbers.  If a tipster chooses to text or email, these are encrypted.  This careful insurance that tipsters remain anonymous has paid off both for fighting crime and for the tipsters themselves.  In 2013, in the eight counties Crime Stoppers of Michigan covers, $88,000 was awarded to tipsters.  Crime Stoppers is a non-profit organization sponsored by many businesses who see the benefits of community-based crime prevention.

Another tool Jones cited as effective is the use of door hangers and billboards in neighborhoods.  Specially created door hangers and billboards feature specific crimes that are occurring in the area which increases awareness of the problem.  People begin paying closer attention to these specific crimes and eventually, according to Jones, “the criminals get shut down.”  Along with providing information on www.1800speakup.org, Crime Stoppers also regularly airs press conferences, posts on twitter, facebook , and youtube all with the intention of “getting the word out and keeping it out there until the criminal is stopped.”

There will be no Neighborhood Safety Meetings in July or August.  There is a Citizens Radio Patrol Workshop on Wednesday, July 16 from 5:30-8pm at the GRDC Offices, 19800 Grand River Ave.  The Radio Patrol offers yet another way to be involved in maintaining the downward trend in crime statistics.  The next Neighborhood Safety Meeting will take place Thursday, September 25 at 6:30pm in the North Rosedale Park Community House, 18445 Scarsdale.  See you there!