A Wonderful Demonstration of Community at GRDC’s 25th Anniversary Picnic 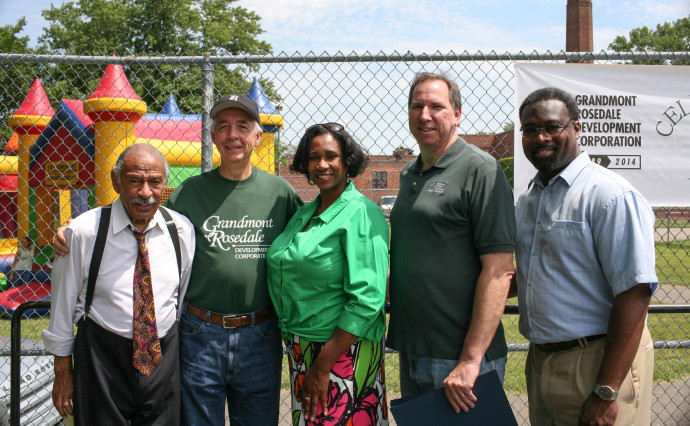 On Monday, July 7th Becki Kenderes, GRDC’s Sustainable Communities Program Manager, was worried – very worried.  “Have you seen the weather forecast for Saturday?”  The GRDC 25th Anniversary Picnic was scheduled for Saturday, and the forecast called for thunderstorms.  As the week went on and preparations for the anniversary picnic neared completion, the thunderstorms changed direction making room for a beautiful, sunny day in Northwest Detroit.

Over 400 people from Grandmont, Grandmont #1, Minock Park, Rosedale Park and North Rosedale Park gathered at Ramsey Park to celebrate 25 years of GRDC’s hard work in the community.  It was a well-deserved break from 25 years of building a community organization from an all-volunteer, one employee organization that renovated one home in its first year, to a several hundred volunteer, nine-employee organization that will most likely renovate its hundredth house this year.  Such an accomplishment demands a big party, and once again, GRDC volunteers, vendors, sponsors, and community members all rallied to make the day fabulous.

The Greater Ebenezer Missionary Baptist Church started off the music with spirited singing that had the cooks dancing as they set up their tables and got the food ready.  Children lined up to ride ponies, get sno-cones, jump in the bouncie houses, try the slack line, get their faces painted, and ask Grandmont resident Cora the Clown for a hat made out of balloons.  The Steve Wood Jazz Trio also performed to much appreciation, and picnic-goers enjoyed the Olde Thyme Harmony Quartet so much that several picnickers joined them as they sang and serenaded their way around the park.  The quartet had such a good time they were there with the clean-up crew, giving their last serenade “Hello Mary Lou,” to Mary Lyons, the GRDC Volunteer and Outreach Coordinator.  The food, provided by North Rosedale Park’s Big Mama’s Southern Kitchen was a hit, too.  All they had to pack up at the end of the day were their dishes!

Rosedale Park resident and District 1 Manager Stephanie Young emceed the presentations which included North Rosedale Park resident and GRDC President Bill Frey’s account of GRDC’s humble beginnings and great strides in its 25 years.  Congressman John Conyers congratulated GRDC on its success and praised its longevity as a vital community organization.  Councilman James Tate presented two Spirit of Detroit Awards to Tom Goddeeris, GRDC Executive Director and the hardest working man in Northwest Detroit, and to GRDC.  The awards recognize both Tom and GRDC for “exceptional achievement and dedication to improving the quality of life” in the Grandmont Rosedale community.  Mayor Duggan’s office also awarded Tom a certificate of achievement with an emphasis on Tom’s role as “an inspiration to others.”  While recognition is important and appreciated, Tom knows that GRDC’s success “wouldn’t have been possible without community involvement.”  And perhaps that is the most important part about the celebration.

Last Saturday, our community gathered together for a picnic, but it was not the first time.  We have been coming together for 25 years.  We have picked up garbage together, we’ve patrolled our streets together, we’ve carpooled to court rooms downtown together to represent our neighborhoods, we’ve organized the maintenance of empty homes together, we’ve gardened together and we even shop together at our farmers market.  Individuals have given their time, strength, and spirit forming one strong community. Together we have made Grandmont Rosedale a better place to live, and consequently, Detroit is a better place to live.

Look for more photos of the anniversary picnic soon to be posted on www.grandmontrosedale.com, GRDC’s Facebook page, and My Grandmont Rosedale’s Facebook page! 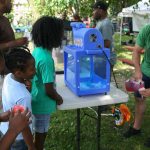 Kids Line up for Snowcones 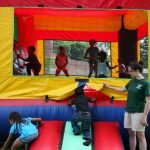 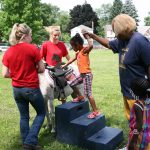 Getting Ready to Ride a Pony 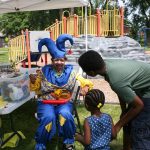 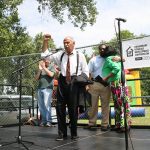