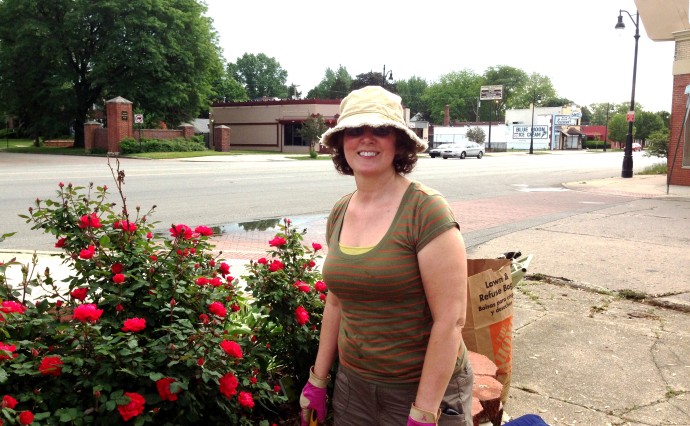 Our Spring 2015 Grandmont Rosedale Community Champion is Vicki Holmes. A resident of Minock Park since 1983, Vicki is a powerhouse volunteer and neighbor in every sense. Over the years she has given back to the community in many different ways including serving as President of the Minock Park Block Association, as a board member of GRDC, as the editor of The Park Voice neighborhood newsletter, and as an organizer the annual Grandmont Rosedale Easter Egg Hunt. However, Vicki says that litter is her real passion. It’s not because trash is inherently lovable, but because litter pick up is something everyone can do and, Vicki believes, once you take part in a cleanup, you’ll never look at trash the same way again. Vicki has been picking up litter on her own time and joining in big pickups such as Detroit Partnership Day for several years. She encourages her neighbors to help out as well because, in her words, “it’s the little things that really change people’s attitudes.” When asked why she loves her neighborhood, Vicki describes the importance of knowing and looking out for her neighbors saying, “People take care of each other here.” She also emphasizes that Grandmont Rosedale is a very family-oriented place. She believes that it is important to give children a sense of responsibility by encouraging them to give back to the community. All three of her children and five grandchildren still gather at their parents’ home in Minock Park every Sunday to share dinner.

Another special quality of the neighborhood that Vicki values is that residents have an open platform to share their ideas and goals for the community. Then the community works together to realize these dreams and ideas one way or another.  One dream and future project that Vicki would like to see happen is the creation of a small park in the vacant lots along Fenkell on the southern edge of Minock Park. “Hope is a necessity,” she says. “You can’t give up or get discouraged when something sets you back. Don’t use it as an excuse to stop trying.” Vicki lives these words and they are exemplified in all of her hard work throughout the neighborhood.

Thank you, Vicki, for all that you do. We are privileged to call you our neighbor and Community Champion!