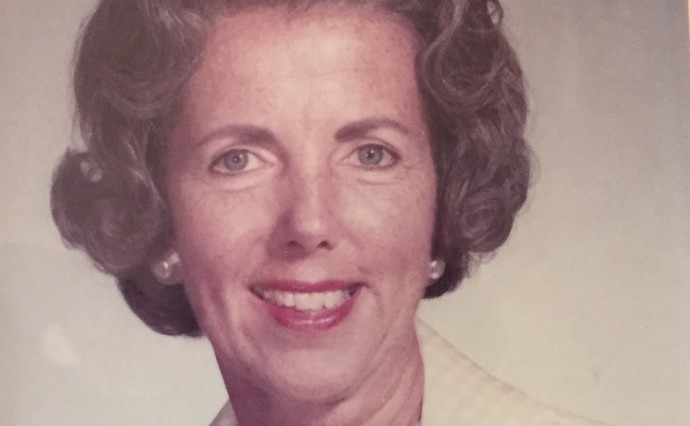 When she was four years old, Trudie Strale contracted polio and spent the next several summers on Harsens Island in a cast. Her grandfather and father were Tiger fans and often listened to the games on the radio. “I learned to love baseball too,” Trudie says. Her lifelong devotion to the Tigers proves this. It has also given her a keen eye for other true Tiger fans: “When I hear that someone is going to a game, I try to tag along. It there’s a party going on and there’s a game on, I either stay home or I ask the host if I can turn on the game. If someone really knows baseball, they know who’s being traded – and who should be traded.”

As a student at Visitation High School, Trudie was a Latin Champ. Her three woman Latin team held the state title from 1935-1937. Trudie’s specialty was translating English into Latin both orally and in written form. After graduating, Trudie turned her attention to the golf course. She asked her doctor if she could golf. He told her “Go out and try it.” Trudie discovered that not only could she play golf, she really enjoyed it, so much so that she became the first single woman to join the Dearborn Country Club. Trudie was mostly interested in playing golf, not in changing the course of golf, but when someone in the neighborhood asked her “Are you the woman who broke the barrier at the Dearborn Country Club?” Trudie answered “I guess I am.”

Trudie, along with her sister and parents, moved to North Rosedale Park in 1949. Trudie has fond memories of parties at the Club House, or as many know it, the North Rosedale Park Community House. Her father “played a wicked piano, and was such a good dancer, my mother hardly got a chance to dance with him.”

Trudie remembers her dad with great affection. Along with his charm and enviable dance moves, he knew how to calm a troubled teen. As a young teenager, Trudie loudly announced to her mother that she was unhappy with her name: “How could you look at a brand new baby and think ‘Gertrude’!?” Trudie recalls.  “My father saw my distress, motioned me over to him and asked ‘Would “Trudie” be better?’” “Anything’s better than ‘Gertrude!’” And so she’s “Trudie,” and has been for more than 80 years.

A couple of years after moving to North Rosedale Park, Trudie’s sister married and her father passed away. In 1950 Trudie and her mother moved to Rosedale Park where Trudie has lived ever since. Trudie worked in a law office and then got her teaching certificate. She taught third grade until her retirement. Today Trudie spends her time reading about sports, primarily baseball, and participating in a number of neighborhood activities. “I’m invited to everything!” she says. She is especially fond of her Rosedale Park neighbors who are “gracious and make me feel very special.” She has seen her fair share of neighbors come and go, but, according to Trudie, she’s “had great neighbors all along. I couldn’t ask for pleasanter people.” Trudie loves the Park Players productions, block parties, holiday parties and even continues to host get-togethers herself. Several of her neighbors came to her 95th birthday party. “I wasn’t supposed to live past my teens,” Trudie says, “I’m grateful! Even when my polio is acting up, I’m grateful that I can feel it! As long as my foot keeps going, I’ll keep going!”