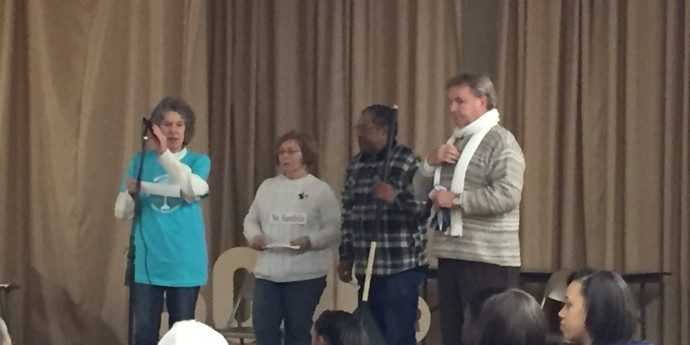 The most recent Grandmont Rosedale SOUP event was another resounding success!  Were you there or were you square?  A great evening was had by all!

To recap, one of the entire world’s greatest Master of Ceremonies hosted the event.  Kevin Johnson kept the crowd entertained with his adolescent humor.  And some other stuff happened too.

Young Sam, a high school cellist, softly played holiday favorites to a crowd of 60-70 attendees before festivities began; he even played some of his original pieces.  Per the normal SOUP format, there were four presenters who shared with the audience, their business model or concept for community improvement.  Those presenters were:

Jeff Adams from Artesian Farms- Jeff is a City of Detroit farmer in the farm to fork movement.  Artesian Farms grow organic produce, which is sold at farmers markets and to local businesses.  They proposed to use the SOUP monies to purchase new equipment to improve their growing process.

Larry Castleberry and his wife Tina represented The Garden Bug- our local gardening center located at 18901 Grand River where they sell flowers, mulch and general garden supplies, (gardening advice is free).  The onsite building is in disrepair and uninhabitable until significant repairs are made making The Garden Bug a seasonal business.  SOUP funding would be used towards restoration.

Michael Smith and his fiancé, Chaetoya, are part of Young Entrepreneurs at Home in Detroit, or Y.E.A.H. Detroit- Y.E.A.H assists small businesses start, manage, and market start-ups.  Y.E.A.H. Detroit has been active in the Grandmont Rosedale community providing support.  The SOUP monies would assist in growing the business.

Next up, was the food.  Delicious, and available for a $5 contribution at the door.  Just reminiscing is making me hungry!  There was:

The moment all had been awaiting was near at-hand.  The fantastic host, Kevin Johnson, held everyone on the edge of their chairs before announcing, with a drumroll, that the Vacant Property Task Force had received enough audience votes to claim the prize!  They were awarded $343 from the sale of hot cocoa and entry fees as well as a matching $350 from the umbrella SOUP organization.

Congratulations again to the Vacant Property Task Force, and thank you to the other presenters who we support in their endeavors.  If you have a business or community project please consider submitting an application for our next event!  It’s a blast, so don’t be a square or any other kind of shape, come on out!

Tell your friends, exciting stuff is happening in Grandmont Rosedale!