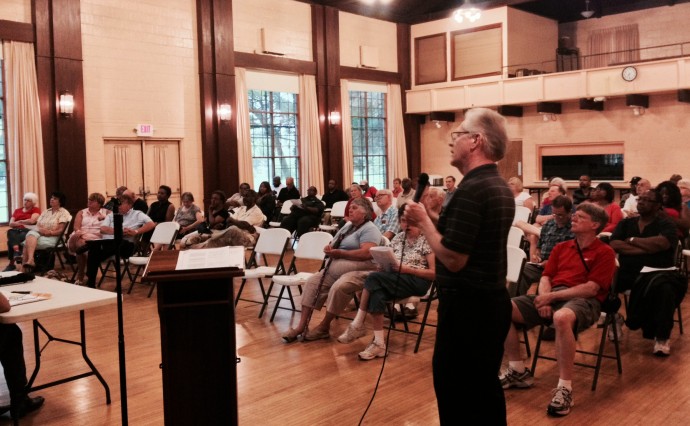 The results of the survey taken by Grandmont Rosedale residents as explained by David Legg of Rosedale Park, revealed that the traffic issues most often cited as problems are:  litter from cars, running stop signs, noise from passing cars, and speeding.  According to the survey, the streets of greatest concern are Grand River and Fenkell.  Among other issues named in the survey as being of concern are: pedestrian safety, using Grandmont Rosedale streets as cut-through streets, and disregarding one-way street signs.

Michael Wright of Rosedale Park explained the next steps in the process of implementing Traffic Calming measures.  Based on the survey results, the Wayne State University College of Engineers will propose solutions to the traffic concerns.  These engineers will then present solutions to the Grandmont Rosedale community.  The solutions will be field tested which means that if one solution is to block off a particular street, that street will be temporarily blocked off, and the traffic effect will be measured for 3 or 4 months.  It will then be determined if the temporary change to traffic patterns did in fact alleviate traffic concerns.  Several of these field-tests will take place over the course of several months in order to determine which changes lead to the most effective traffic improvements in Grandmont Rosedale.  The Traffic Calming committee emphasized that the community, along with GRDC, will be engaged throughout this process as once the traffic calming measures have been field-tested and the results have been examined for effectiveness, the changes to the traffic patterns in Grandmont Rosedale will be permanent.  The approval of city of Detroit’s Department of Public Works will be necessary as will the city council’s before these permanent changes can take place

This was the first community-wide Traffic Calming meeting to review the survey results and discuss the next steps in the process.  Look for future meetings to find out more about the Traffic Calming initiative and how to become involved.  To find out more, contact Pam Weinstein at weinstein148@ameritech.net.