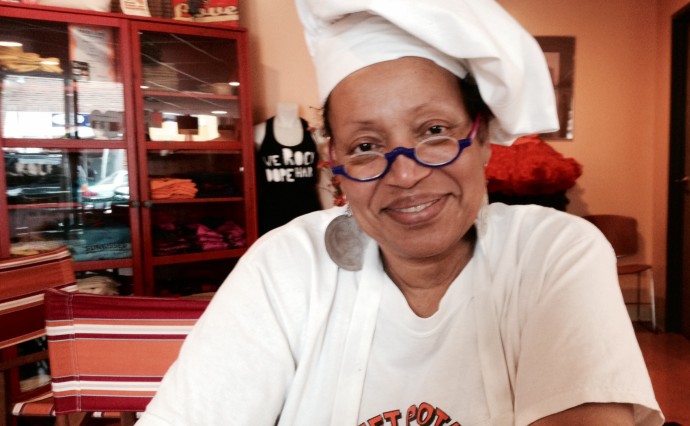 “I couldn’t believe it!”  That was Sweet Potato Sensations owner and North Rosedale Park resident Cassandra Thomas’ reaction when she found out that she was on the cover of Hour Detroit magazine.  Cassandra recalled the interview with Hour editor and fellow North Rosedale Park resident Steve Wilke, and the trip downtown to get her photo taken, “but I never dreamed I’d be on the cover!”  Hour Detroit’s first food issue features established chefs and food entrepreneurs from all over Michigan who are creating interesting and original food.  Cassandra is one of those local entrepreneurs who has been busy for more than 25 years making delicious sweet potato pies, cookies, cakes, muffins, tarts, ice cream, cupcakes, cheesecakes, and cobblers.  The going has not always been sweet, however.

Cassandra started out baking sweet potato cookies in her kitchen in 1987.  The cookies were so good, Cassandra’s neighbors encouraged her make it official and incorporate.  Soon her home kitchen was too small, so she starting baking in the North Rosedale Park Community House kitchen.  After a couple of years she moved to a bigger restaurant kitchen in Southfield.  The owner of the restaurant soon went out of business, however, and without warning.  Cassandra had to move out quickly without a place to go.  She thought that maybe she ought to just give up the whole thing.  It was hard work, and she was tired of moving from kitchen to kitchen.  Feeling discouraged one day driving home down Lahser, she saw a for rent sign next to the Redford Theatre.   “I called the number and asked what they were charging.  I could afford it!  I was so excited.”  However, the storefront needed remodeling which was an expense beyond the purchase of supplies and rent.   As a gesture of neighborliness, Cassandra brought of tray of goodies to the board of the Motor City Theatre Organ Society, which owns and operates the Redford Theatre as well as the storefront next door.  The board reciprocated Cassandra’s kindness by telling her “’Pay when you can.’”  This generosity worked:  “I really was ready to quit again.”  Cassandra was in that tiny storefront next to the theatre for 15 years.

Slowly word spread about Sweet Potato Sensations.  In 2006 Cassandra bought a larger storefront across the street for the Redford Theatre.  Once again, the building needed extensive renovation.  The Ross Business School through the University of Michigan, and Motor City Blight Busters helped take up the floors and take down the walls.  The renovation was so complete, Cassandra once again found herself thinking “I’ve made a big mistake”.  Just as she was ready to tell the volunteers to head home, a dumpster pulled up to take away the debris.  “Most dumpsters are black or dark blue, or some other dark color.  This one was orange.  It was a big, bright orange dumpster – like a giant sweet potato.  I saw it as a sign.”  Cassandra credits her perseverance to her strong faith.  “I almost gave up many times.  Then I would get a phone call telling me how wonderful my pies are, or a customer would come into the store and buy something of everything and remind me that ‘God loves you!’ or an enormous orange dumpster tells me to keep going!”

There are many who are very glad Cassandra has hung on.  The Northwest Detroit Farmers’ Market is glad she stayed, as is Eastern Market and the markets at Wayne State and Beaumont Hospital.  The Redford Theatre is very glad she stayed because now they’re collaborating on a dinner and a movie idea from which both businesses would benefit.  The customers that come to Sweet Potato Sensations on Wednesdays and Saturdays are also grateful for Cassandra because now she’s serving up sweet potato waffles and chicken on Wednesdays, and sweet potato pancakes and sausage on Saturdays!

Cassandra is also grateful for the family and community support she has received over the years.  Her husband and both daughters help out in the store and at the farmers markets.  Once a month Brightmoor gardeners collect compost from her store.  The compost is used in several gardens which grow produce sold at the NW Detroit Farmers’ Market.  And Cassandra still has a key to the Redford Theatre.  “I let myself in to leave cookies on the counter to be sold at the show.”  Cassandra’s daughter, Espy reinvigorated the Old Redford Business Association and, along with several other businesses, made sure that they had working street lights and that the parking meters along Lahser were removed.  It takes a lot of dedicated people to make an independent business succeed.  You need customers, business collaborations, creative ideas, and an entrepreneur who has the vision to see divine providence in an orange dumpster.  Come see what Cassandra is cooking up at Sweet Potato Sensations at 17337 Lahser Road in Old Redford.  To check out the August issue of Hour Detroit, click HERE. 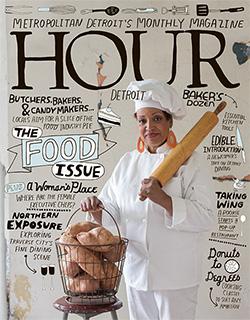