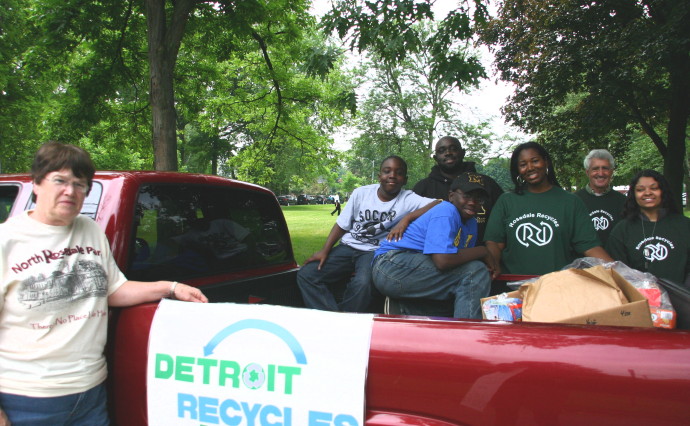 Rosedale Recycles, the all-volunteer run recycling drop-off site at Christ the King Church celebrates its 24th year in service to the Grandmont Rosedale community! That’s 24 years of collecting such recyclables as newspapers, office paper, glass, tin, aluminum, cardboard, #1 and #2 plastic, and, twice a year, hazardous waste. Rosedale Park resident Margaret Weber, who has been a part of Rosedale Recycles since the beginning, remembers the late 1980s when she sat on the Rosedale Park Improvement Association board and the then president Bob Holland asked the question “’Who would like to do something about the incinerator?’” “Never underestimate the power of asking a question,” Margaret says. Rosedale Recycles was started in part as an answer to that question. When people recycle more, there is less trash to burn and less need for an incinerator.

Rosedale Recycles has offered an important service to our community for years, and community members have become involved. Margaret estimates that there have been at least 20 regular, long-time volunteers and several shorter terms volunteers as well as girl scout troops, boy scout troops and the Cass Technical High School National Honor Society. The community also helps out by donating to help defray the cost of moving the large bins to and from the Christ the King parking lot. Christ the King has never asked Rosedale Recycles for money for using their lot, but RR is aware of the wear and tear the bins have on the lot and voluntarily pay a nominal “rent” fee.

A year after its establishment in 2006, Recycle Here! a city-wide recycling program, approached RR to pool their resources. RR’s careful record-keeping of the numbers of recyclers and the amount of materials was helpful to Recycle Here! Margaret credits Zero Waste Detroit, established just two years after Recycle Here!, with being the standard bearer moving the city forward, “If it weren’t for Zero Waste Detroit, we wouldn’t be where we are now – on the cusp of having it in the city charter that recycling is the first option for waste.”

It is clear that Rosedale Recycles has made a difference not just in our community, but in all of Detroit. RR was around before either Recycle Here! or Zero Waste Detroit, but it may not be for much longer. Their monthly drop-off dates have changed to bi-monthly, and may stop all together. The reason for this is because curbside recycling is available to many residents. Margaret does not consider her work done, however. “It’s a real sign of progress if everybody has curbside recycling. It’s a greater job to encourage people to opt in.” She is already strategizing how to get residents to recycle what they can. Ultimately Margaret wants to pass on what her father taught her: “be attentive to the use of resources.”

Rosedale Recycles will be at Christ the King Church, 20800 Grand River this Saturday, May 17 from 10am-2pm to take your paper, cardboard, aluminum, tin, #1 and #2 plastic, and white and brown glass. There will also be a shredder. Hazardous waste collection will be held July 19.