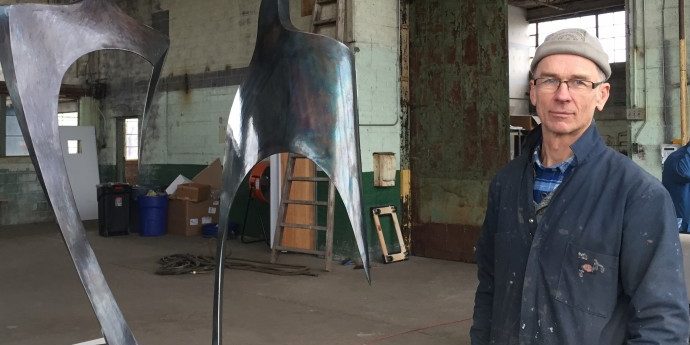 Before coming to Detroit, Robert Onnes, or Rob, was an established sculptor of steel and copper in Whangaparaoa, outside of Aukland, New Zealand. He had group and solo shows that featured his graceful, solid, and organic sculptures of skua birds, kiwi, large aboriginal profiles, and other sculptures that echoed the features and treasures of New Zealand. Although beautiful and familiar to Rob, New Zealand is a country with a small population which means fewer people who will buy art. Rob read an article about Detroit in the October 2012 issue of The Economist. The article, “Metaphoroplis,” described Detroit as “representative of a new America as imagined by artists, entrepreneurs, urban planners and urban farmers…full of creative possibilities.” Rob got in touch with long-time Cass Corridor artist Bob Sestok who confirmed what Rob had read and encouraged Rob to come to Detroit.  That was all the convincing Rob needed. He and his wife Helen sold their home and moved to Detroit. According to Rob, they came to Detroit “for the art.” It’s just that simple.

Rob likes the “constraints and possibilities found with using sheet metal to design three-dimensional forms.” “Steel and copper offer a solid and earthy, organic feel” to his sculptures, which are often inspired by modern industrial design – something we have quite a bit of, both architecturally and historically, in Detroit.  As some of Rob’s sculptures are quite large, he needed a large space to form steel and copper into steel faces, kiwis, gannets, and abstract rock formations. Rob also presses butterflies and other forms in copper, so it is fitting that Rob bought the former Lewis Metal Stamping and Manufacturing plant in Highland Park as his new home to sculpt. The plant had been vacant for some time however. Volunteer trees had started to push up the pavement around the plant and the roof itself. Squatters had had more than a few small fires inside one of the buildings, and Rob also found evidence of any number of small animals that had explored the buildings.

It’s been about three years since Rob began renovation at 333 Midland, (managed by Robert Sestock), Rob’s workshop/studio, former stamping plant in Highland Park. Last June Rob and Robert hosted his first show: BIG Paintings. The show was well attended, and many were very interested in what Rob had in mind for the building. While the building is able to host shows, Rob has plans to create artist-in- residence spaces where visiting artists can live and work at 333 Midland. The space is large, 22,000 square feet, so Rob will also offer large bays for artists to rent to work on large projects. These aren’t just future plans, though. Currently Rob has nine renters, one of whom is an aerialist for whom the large, open space is perfect. His workshop has also created jobs for tradesmen and artists. There’s more renovation to be done, to be sure, but Rob is enthusiastic about the future of 333 Midland and about artists creating in Detroit. A Big Sculpture show is in the works for the fall.

For those of us who live and near Detroit, it is an exciting time in the city. That news of this got all the way to New Zealand and inspired an artist and his wife to move here, is really impressive and even a little shocking. Rob is an accomplished artist who wanted to live and work in a place where artists of all types were able to pursue their work because they have a community and an audience who supports the arts. Rob knows that a thriving art community means business not just for that community, but for the broader community as well: “Artists are driving the rejuvenation of the entrepreneurial business scene in Detroit, and it’s inexpensive.” While it’s gutsy what Rob and Helen did, it was pretty well-reasoned too.

Another great decision they made was their decision to buy a home in Grandmont Rosedale. They were looking for a neighborhood, not just a house, and they found one. Living in Grandmont Rosedale is, according to Rob, “very good! Excellent neighbors.” This past November, Rob and Helen celebrated their first Thanksgiving in their Grandmont Rosedale home. They liked the meal so much Helen bought another turkey to cook this winter.

While there have been challenges in renovating such a large and long empty space, Rob shows no signs of stopping or even slowing down. Many people have ideas of pursuing a dream. Many people also think of a million reasons why they can’t or shouldn’t or won’t. Some wait for the perfect opportunity that never arrives. Very possibly Rob had some doubts, but he didn’t wait. “You only get one life,” he says, and he is indeed making art happen in a formerly empty stamping plant in Highland Park.

You can check out Rob’s work at www.onnz.co.nz.