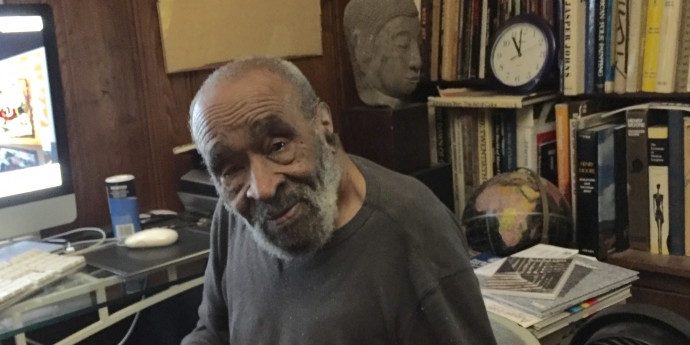 A good way to learn about someone is to check out the titles on their bookshelves. Charles McGee’s crowded bookshelves have titles like Chinese Cooking. Metal Working, Picasso, Ancient Egyptian History, and Gardening. In short, Charles’ interests vary widely and he has been curious his entire life. A life-long study has been how nature, the world, its people and all its activity somehow manages to find a balance. Charles is deeply interested in the dynamic of opposites: opposing colors, men and women, even such abstract notions as the length and brevity of things – the order and complexity of how all of these seemingly opposing forces come together to find a balance is “magnificent to me,” says Charles.

Charles started to notice the complexity of the world and its magnificent order when he was just 10 years old picking cotton in South Carolina. After his mother moved to Detroit to live with her brother during the 1930s, Charles and his sister followed. Charles attended school for the first time at George Washington Elementary. He struggled in school due to his lack of formal education. He found that he communicated and understood much better if he used pictures, and so he began drawing and becoming interested in others’ drawings. As a kid, Charles took art classes offered at the McGregor Highland Park Public Library. At Cleveland High School near Hamtramck, he used his drawing skills and his growing interest in design to create floats for the school parade. A teacher noticed Charles’ gift and Charles quickly went from student volunteer to head designer and coordinator of float construction. Soon, thereafter, Charles’ uncle passed away and his mother was hospitalized with tuberculosis. Charles’ education then moved to Briggs Manufacturing in Detroit. Charles saw the organization and complexity of the factory as yet another example of the magnificence of order and balance, and how, while there are countless pieces involved in the process, each piece is vital, for, as he remembers, “if you take out one piece in the process of building a car, the car won’t work properly.”

Charles was drafted at the end of World War II and was sent to Nagasaki after the bombing and then came back to Detroit to work. Charles continued to take art classes in the evenings. He studied art at College for Creative Studies back when it was on Watson Street and called the Detroit Society of Arts and Crafts. At this time, Charles focused on drawing and painting mostly because “it was easier to carry drawings on the streetcar than a sculpture.” In the coming years Charles continued to work in manufacturing, while also studying art at Marygrove College and Eastern Michigan University. He also began a serious study of sculpture.

When Charles married, he thought about where he wanted to live with his wife and the children that were to come. The newly married couple chose Rosedale Park. This choice was in keeping with Charles’ outlook not just on art, but on life: “Rosedale Park is a neighborhood that cares. It has a uniting structure that fosters this togetherness – the Rosedale Park Improvement Association.”

Charles McGee, at 91, was commissioned by the Kresge Foundation to design the sculpture that towers outside the Charles H. Wright African American History Museum. This sculpture is titled “United We Stand.” It is about 25 feet high and represents Charles’ vision of the amazing variety and balance that surrounds us. While he has worked in a cotton field and a factory, Charles has been a full-time artist “all my life! We all have a journey. We all have to find our own pathway with the help that’s available to us. I was forced on a pathway through trying to make a living. I think I did pretty good.”

Besides his recent commissions both at the Charles H. Wright Museum and downtown, Charles McGee also has 12 pieces in the permanent collection at the DIA, helped run free art classes for kids in the 1970s, and has been an inspiration to countless established and up and coming artists. Check out this article about the installation at http://www.joycefdn.org/programs/charles-mcgee-2016/. 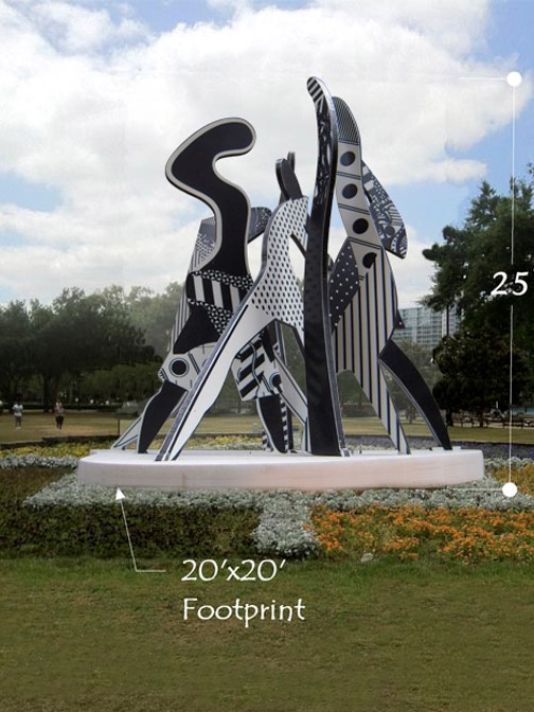