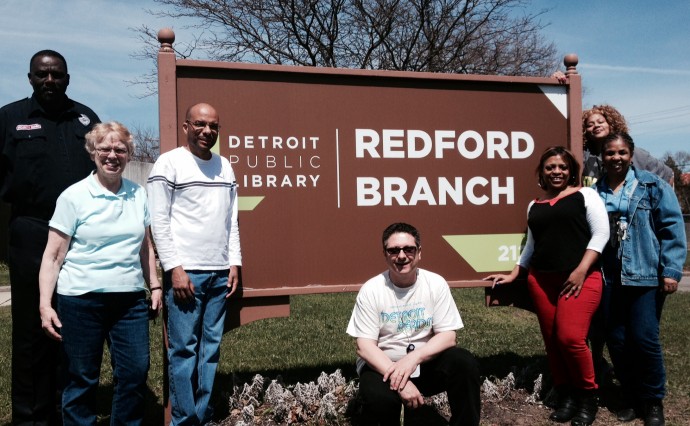 On May 5, the Redford Branch of the Detroit Public Library closed for renovation.  Although the library is closed for the next several months, there will be a lot of activity inside the library.  According to assistant branch manager, youth librarian and Rosedale Park resident Conja Wright, there are a lot of improvements in the works.  “The carpeting will be removed and replaced with tile in the public areas, new, lower shelving will replace the tall shelves which will open up the main room to natural light, and the number of computers will double and move to the center of the main room.”  For the month of May, the librarians will be looking more closely at their collection, discussing the removal of books that haven’t been checked out for seven years to make room for more, and more recent publications.  An African-American reading and research collection will also be added which will feature books on African-American history, culture and art, children’s books and a research collection for use as reference in the library.  There will even be artwork and artifacts such as a king’s stool, a helmet, crown and dolls on display.

If you came to the first Grandmont Rosedale SOUP last summer, you will remember that Conja’s meditation and reading garden for the library project won.  The plans for the garden are well underway with eight organic raised beds.  Starting in early June Conja welcomes volunteers to help develop the garden and is particularly interested in gathering “an intergenerational group of volunteers” because she strongly believes that “so much learning goes on” when people of different ages work together.  Volunteers of all ages are encouraged to come to the library garden Tuesdays from 10am-12pm and Thursdays from 3-5pm until the end of July.  The hope is that the garden will be an outdoor library space appropriate for storytelling and spoken word performances.

Conja’s enthusiasm for the library is evident.  In fact, she “grew up loving the library.  When I wasn’t on the softball field, I was in the library.”  The Redford Branch library is home to many people.  Conja tells the story of one man in particular who used to frequent the library so often “he became part of the goings on.”  “He came regularly because the library was warm and he had access to a computer.  Then one day he came with pizza and pop for all the staff.  When we asked him why, he said ‘I told myself that when I got back on my feet, I’d buy everyone here lunch because you were always so kind to me.  I was able to find a job because you let me use the computers here, and I just wanted to thank you.’”  This story is one of the reasons Conja loves being a librarian and is very excited about the renovations.  “We can’t sit in the middle of a community and not serve it.”  The hoped for finish date is the beginning of fall, just in time for the new school year.