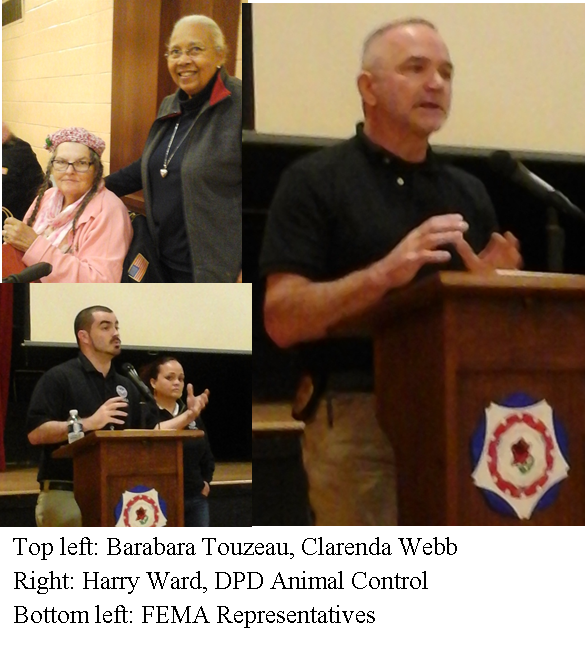 On Thursday, October 23, the North Rosedale Community House was filled with engaged citizens and government officials! Representatives from the Federal Emergency Management Agency (FEMA) as well as the Detroit Police Department Animal Control Manager, Harry Ward, presented and remained after the meeting ended to answer questions.

FEMA representatives presented at the meeting to answer general questions about FEMA policies and procedures as many residents are concerned about flood repairs. FEMA representatives stayed after to assist residents with individual cases. Copies of handouts prepared by FEMA are available at the main GRDC building. If you were unable to attend the meeting, similar FEMA services are available at the Wayne County Community College Northwestern Campus at 8200 Outer Dr, Detroit, MI 48219. The deadline for flood disaster assistance applications is November 24, 2014!

Detroit Police Department Animal Control Manager, Harry Ward, presented as well on Thursday evening. He prepared statistics for the Grandmont Rosedale area, reporting that animal control instances are very low compared to the entire city. For example, the Animal Control department has received 8000 calls about issues with dogs within the city since January; only twenty-one of those calls were about instances located in Grandmont Rosedale communities! Topics included leashing, licensing, biting, and more. The presenter made clear that all Animal Control policies are based in the “Summary of Detroit Ordinance Animal Control Regulation and Care.” A link to this information is available at the bottom of the article.  Mr. Ward urges Detroiters to familiarize themselves with the summary of animal care ordinances the department has provided and to thank hard-working animal control staff!

Over seventy Detroit residents attended this neighborhood safety meeting with twelve of those as first time attendees! A raffle for first time attendees occurs at each meeting. Barbara Touzeau (featured in the picture), won a safety-related prize courtesy of the Community Security Program at Grandmont Rosedale Development Corporation! We thank Barbara and all other engaged residents for attending and contributing to a discussion about safety in our city! As a reminder there will not be a meeting in November.