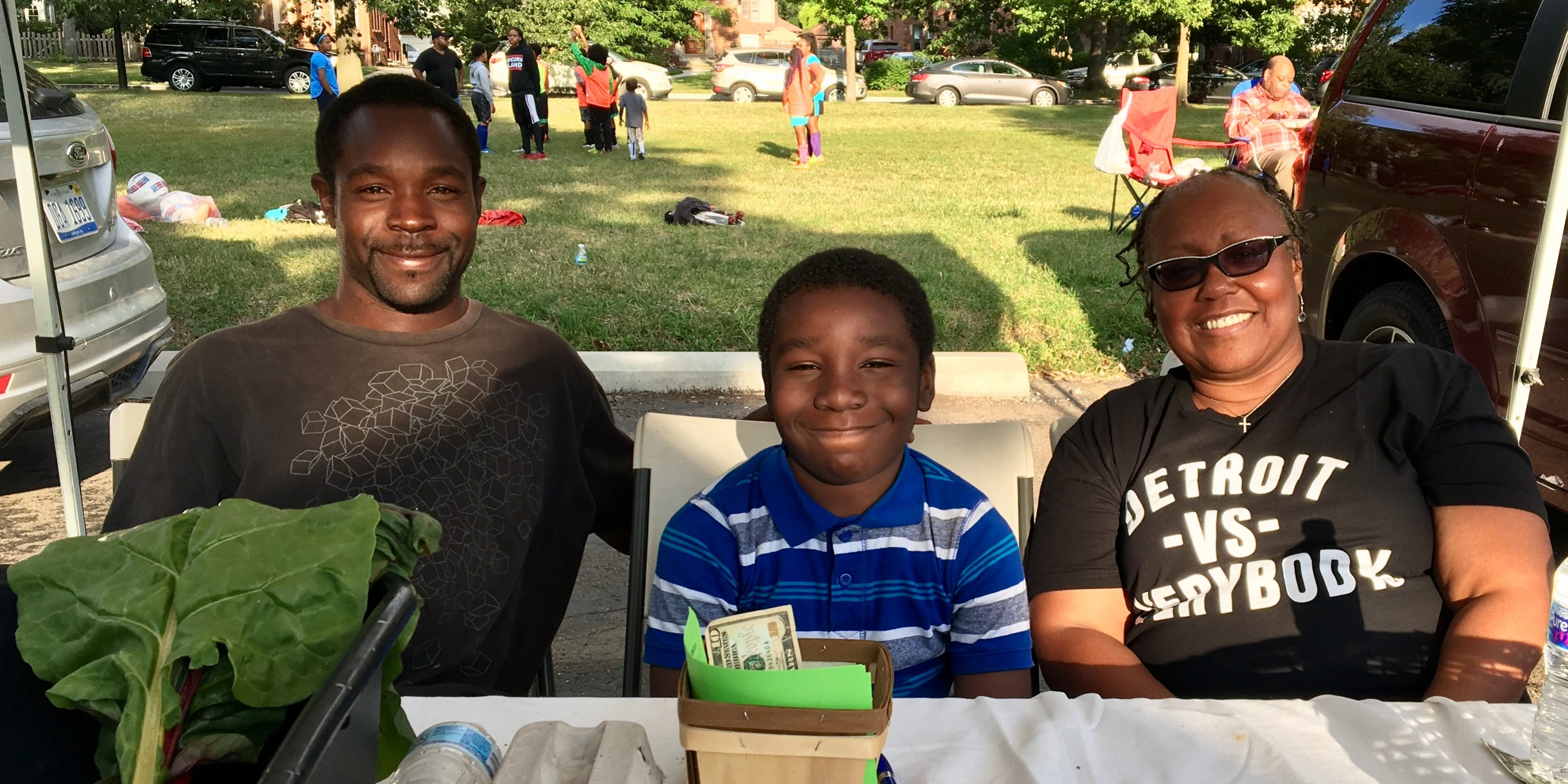 According to its website, Oakland Avenue Urban Farm is “The nation’s first ‘Agri-Cultural’ urban landscape in Detroit’s North End.” This combination of urban agriculture and culture is truly unique. This nearly five acre farm, which is a program of the North End Christian Community Development Corporation, was started in 2008 and is a non-profit, community-based organization dedicated to cultivating healthy foods, sustainable economies, and active cultural environments. Oakland Avenue Urban Farm is close to what remains of Hastings Street, a former, thriving center for entertainment, shopping, and music. You could say that the same soil that once supported such legends as John Lee Hooker now sprouts beans, greens, and tomatoes. In fact, just as the surrounding community created the culture of Hastings Street, so too did the surrounding community shape Oakland Avenue Urban Farm. The three main crops at the farm are beans, greens, and tomatoes because that’s what the community wanted most. And it was the tomatoes that taught Jerry Hebron, the “commander and chief” of Oakland Avenue Urban Farm just how much the community around the farm had to offer.

Early on, Jerry had grown quite frustrated and concerned that none of the tomatoes had turned red. The plants looked healthy, and they had many green tomatoes, but none of them ever turned red and she couldn’t figure out why. Then one day as she was grumbling to herself about the mystifying tomatoes, a man walking by heard her complaint and offered his insight. “You don’t know why they don’t turn red?” “No!” Jerry answered. “People eat green tomatoes, that’s why! Haven’t you ever had a green tomato?” The mystery was solved and Jerry got a recipe for fried green tomatoes. “I’ve been eating them ever since,” she says.

Volunteers from the community surrounding the Farm weed, water, and transplant. They work in the hoop houses, and they organize fruit canning festivals, farming workshops, and fundraisers. Some of those volunteer positions turn into jobs. Carlos Leonard is one of many people to take this route from volunteer to employee, and along the way he got an impressive education. As a Garden Manager, Carlos has traveled to Traverse City, Michigan and California to learn about compost and farming techniques. Currently there are 13 people who come from the surrounding community and who have found employment at the Farm.

Two years after the farming began, the growers began selling their produce and some other, locally-sourced goods. They run the only Farm Store in the North End where they sell Afro Jams, Sweet Sticky Things Honey, and Bissap Hibiscus Cooler. They sell produce at our Northwest Detroit Farmers’ Market every Thursday from 4 – 8 pm. Velonda Anderson, owner of Sweet Potato Delights, another Northwest Detroit Farmers’ Market vendor, has asked Oakland Avenue Urban Farm to be her source for beets. Oakland Avenue Farm also sells their produce at five Chrysler plants. The money earned at the Farm Store and markets goes back into the Farm and the community. As their circle of relationships widens, so does their influence and so does the community of growers, gardeners, shoppers, and cooks.

TAKING DIRECTION FROM THE COMMUNITY

Jerry says that when the Farm started the organizers took their direction from the needs of the people in the community around the Farm. Those needs were food, jobs, and housing. They planted according to community request, they provide the volunteer-to-employment option with the idea that, with steady work, housing will soon follow. It’s worked out beautifully for Carlos and his son Carlos LeVon. While Farm mostly grows the most community requested greens, beans, and tomatoes, the Farm does its best to listen to all its community members, no matter how young. When he helps his dad on the Farm, Carlos LeVon’s favorite thing to both grow and eat are strawberries. He also helps his dad out at the Northwest Detroit Farmers’ Market. His dad enjoys the company of his son and of the other vendors and shoppers too. “I love this market!” Carlos says.

Oakland Avenue Urban Farm is a collaborator with One Mile, a “multi-disciplinary collaborative effort to support the cultural production and socio-economic activity of Detroit’s North End neighborhood.” Just last month One Mile was the site of the induction of John Lee Hooker into the newly established Detroit Sound Hall of Fame. Jean Louis Farges, the Creative Director of One Mile, sometimes stops by Oakland Avenue Urban Farm to help out. As Jerry says the Farm is “about community, about bringing more awareness” to the community that was here, and that is growing here again.