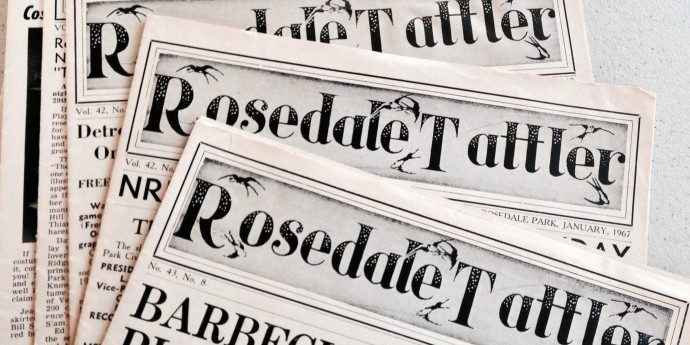 The first steak roast in North Rosedale Park was not called a “Steak Roast” and women were not invited.  In 1967 the Rosedale Tattler announced a “barbecue” this way:  “Attention Men!  There is just time for you association members to make reservations for the big stag event!”  (women could not be members of the NRPCA either).  One wonders about the conversations in households after this first year, as the following year an invitation was extended to women as well as men.

This first year was a celebratory year because the civic association had recently remodeled the kitchen in the Community House and installed a sheet metal roof over the skating shelter and equipment garage.  Many may recognize the kitchen remodel of “Formica countertops and three stainless steel sinks”.  What is less recognizable is the cost of the remodel:  $1, 170.  The roof had to be replaced because “kids” had climbed on the wooden roof “and punched holes in it.”  The new roof cost $1, 052.  The tickets for this first Steak Roast?  $1 (that’s not a typo).

The menu for Steak Roast has changed some over the years too:  In 1970 a $5 ticket to the “Cook-Out and Dance” got you “tomatoes, cottage cheese, and home-baked bread” as well as steak.  One year it was called a “Western Chuck Wagon” and featured ribs and corn on the cob.  Some years card playing was the entertainment, other years there were sing-alongs.  Sometimes door prizes were awarded, some years the Steak Roast also served as a general membership meeting.  A silent auction has happened some years, and some years the NRPCA hires a live band.   Almost every year it seems, there has been dancing.  Every year for sure the food is almost as excellent as the company.  This year, the 47th, the food will be fantastic, the music will be jazz, and the conversation will again be wonderful.  Many hard working neighbors put in a lot of time into this event because they believe in its importance for the community.  It is good and important for a neighborhood to work together to get things done, but it’s also good and right to get together to share a meal and to have fun.