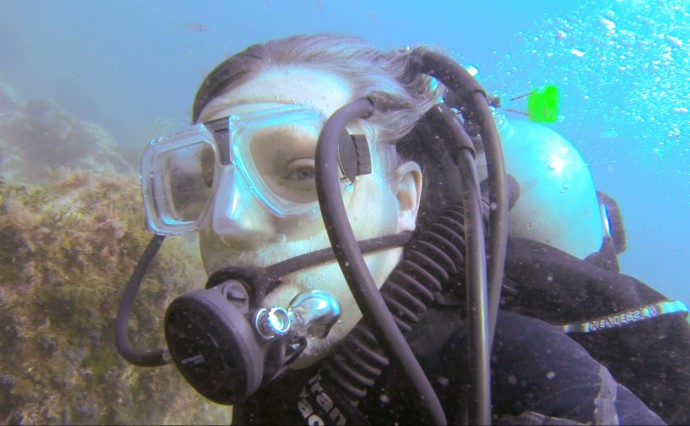 It’s an interesting story, that of Rich Castillo.  The path from ballroom dancing lessons at the North Rosedale Park Community House to an underwater stand-off with a male sea lion weighing in at 1000 lb.s is unusual and unusually interesting.  While his footwork was no help in that situation, he did manage to escape unharmed, ready for his next dive.  Rich is a man for whom retirement means extra time to engage sharks, film sting rays, sit on the NRPCA board of directors, mow lawns at vacant houses, and create a film commemorating GRDC’s 25th anniversary.

While many are satisfied sitting bidding farewell to summer on a boat on, say, Lake Huron, Rich prefers to go below, to photograph or film Great Lake shipwrecks of which there are apparently many.  Late August or early September will probably be his last dive of the season and then he’ll get ready to enter his film in the Great Lakes Shipwreck Film Festival this winter at Washtenaw Community College.  Rich makes retirement look like a lot of fun.

Rich’s first dive as a certified deep sea diver was in 1975 in Orchard Lake.  There were no sea lions, sharks or shipwrecks, “just lots of mud,” but Rich was hooked.  His most recent dive was in the Sea of Cortez between Mexico and the Baja Peninsula.  Again he was photographing big game in the deep sea.  The only thing not surprising about Rich’s hobby is that it was inspired by “Sea Hunt,” the television program starring Lloyd Bridges from the late 1950s.  Unlike Lloyd Bridges, Rich has not salvaged a nuclear missile, or a downed Navy pilot, but Rich has had his share of underwater thrills.

According to Rich his scariest dive happened off the coast of Cocos Island which is more than 300 miles off the coast of Costa Rica.  Fascinated by the sheer amount of underwater wildlife, Rich chose to stay where he was rather than follow his fellow divers who swam off to film elsewhere.  The current was strong and Rich was tired but also entranced by the “21 hammerhead sharks that paraded in front of me while my air ran low”.  When Rich finally turned his attention to his growing problem and resurfaced, he was alone.  The current soon began to take Rich and his heavy camera equipment further out to sea.  The safety tube and horn he had with him proved to be what saved Rich from simply floating off.  He was the last of the crew to be picked up from the dive off of Cocos Island.

Before Rich retired to the sea he worked as a commercial imaging and design developer for industrial clients.  Before that he sold scientific optical instruments to such customers such as universities for industrial research.  Before that Rich worked at Henry Ford Hospital as a medical photographer, and before that Rich worked as a VW mechanic which he liked quite a bit.  He liked it so much in fact that when it came time to choose between being a mechanic and being a photographer, Rich made a list of pros and cons.  Photography won.

Rich was in the reserves before he became a mechanic and even lived on a commune in California for a year between the reserves and his stint as a mechanic.  His decision to go into the reserves was based on his disappointment in learning that while his pilot’s license (yes, he’s also a licensed airplane pilot), could get him into the air, his eyesight prevented him from flying in the military.  Just a few years before that was the first time Rich stepped into the North Rosedale Park Community House to take ballroom dancing lessons.  It was then, when Rich was 13 and taking lessons because he “liked the girls” that Rich looked around the Community House and North Rosedale Park and said to himself: “I’m going to live here when I grow up.”  And in 1977 he did.  For 37 years Rich has been living in North Rosedale Park, cutting his and others’ lawns, taking out his garbage, sitting on the NRPCA board, and taking the occasional vacation to see what’s under the sea.