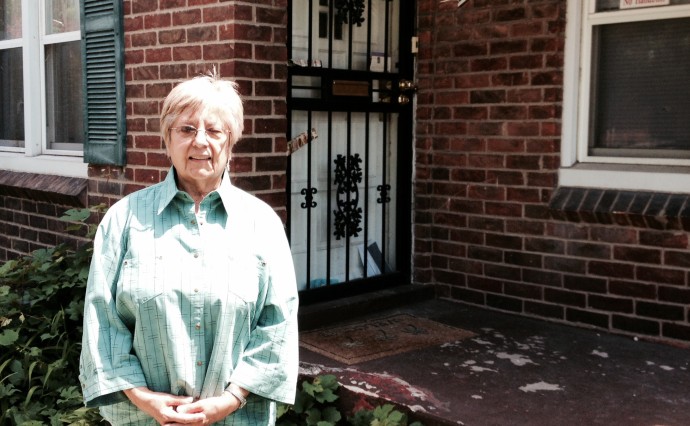 For several years, Margaret Oldfield of Minock Park had a terrific neighbor named Tony.  Before he moved in, Tony renovated the kitchen, refinished the floors, and painted.  Margaret and Tony soon became good friends as well as good neighbors.  After a few years Tony found that maintaining a home, working and going to law school was too much, so he moved out.  The house next door to Margaret sat empty until March of this year when Margaret saw another young man moving in.  Margaret did what she usually does when someone new moves into her neighborhood:  She welcomed him and brought him a copy of The Park Voice, the neighborhood newsletter.

At first, Margaret’s neighbor was fine.  He wasn’t noisy and he kept the lawn cut, but Margaret felt as if something wasn’t quite right.  She knew Tony wouldn’t have sold the house without telling her.   Her new “neighbor” claimed he had purchased the house, that he had a quit claim deed.  Concerned, Margaret gave Tony a call. “I didn’t sell the house; it was foreclosed,” Tony told Margaret.  The next time Margaret saw her new “neighbor” she asked for a copy of the deed.  He gave it to her willingly, she made copies, and sent one to Tony.  “That’s not my signature,” Tony responded.  Soon thereafter, Margaret noticed that her new “neighbor” did not use a key to get in the house, stopped cutting the lawn and loud arguments became frequent.  Margaret brought her concerns to fellow Vacant Property Task Force members who offered to send a copy of the deed to the 6/8th Precinct and to the Wayne County Register of Deeds, to see what they could find out.  And Margaret began paying even closer attention to what was going on next door.  It was discovered that Margaret’s “neighbor” claimed to own several properties throughout Grandmont Rosedale, sometimes pulling the boards off of windows and “renting” houses out.  He owned none of these properties.  He found foreclosed homes online and squatted.

District 1 Manager Stephanie Young, Councilman James Tate, and Bernard J. Youngblood of the Wayne County Register of Deeds came to a Vacant Property Task Force meeting, listened to what was going on, and ensured the task force that they were doing everything correctly in the pursuit of stopping the squatter.  Officer Fabio Buscemi of the 6/8th Precinct came to that meeting too.  Officer Buscemi listened to Margaret’s concerns for her neighborhood, and became a key figure in resolving the case.  Margaret typed up the notes she had been keeping, complete with descriptions of people and cars, times, and license plate numbers.   She sent this to Officer Buscemi who thought it looked “like a professional detective’s report.”  Officer Buscemi heard Margaret’s frustration with “bullies who force good people out.”   He told Margaret “I’m coming tomorrow.”  Officer Buscemi and several other officers were there “tomorrow” – on Memorial Day.  They raided the house and arrested the squatter. Neighbors from Minock Park and Rosedale Park showed up in 36th District Court to show the judge and the squatter that “We are here and we care about our neighborhood.”  “That should be the end of it,” Officer Buscemi assured Margaret.  The squatter posted bail and returned.  When Margaret reported this to Officer Buscemi, the officer also returned and told the squatter “I will be by every day until you leave.”  Officer Buscemi came by as promised and the squatter did, finally, leave.

“You have to be vigilant,” Margaret says.  Vigilant and determined to keep Grandmont Rosedale the kind of community where neighbors pay attention, show up in court if necessary, and welcome others who want to live in a neighborhood with people who care.