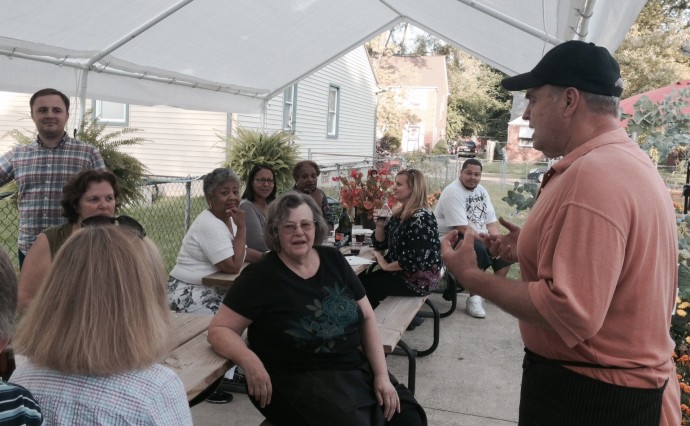 Ken Wolfe is a great story teller.  He comes by this honestly.  His mom came from Southern Illinois, from “poor folks, where storytelling was the backwoods entertainment.”  In order to be a great storyteller, however, one also has to have good material, and Ken has a lot of good material.  Sitting on his porch watching the finches who come by twice a year to nibble the heads of cone flowers, Ken began to tell the story of his beginnings with a kind of warning:  “Whenever my mom would start a story, my dad accused her of going back to Adam.”  Ken didn’t begin there, but he did begin with his grandfather who was a coal miner in Pennsylvania and who died of black lung when Ken’s dad, Dave, was just five years old.  An orphanage for the children of deceased miners took Dave in while his mother lived nearby and visited every weekend.

Ken’s parents met in Detroit when his father was 35 and his mother was 19 and married after a three week courtship.  In 1947, Ken’s family moved into a house in Warrendale.  There were six kids and two parents living in a 500 square foot house.  Ken’s dad built an addition and a basement, almost doubling the size of the house.  After twelve years, Ken’s parents bought a 1500 square foot house in New Hudson.  “We thought it was huge!”  At 27 Ken moved to a duplex in Minock Park, right across from the tennis courts at Stoepel Park.

When Ken lived in the duplex, he “got to know what a good neighbor is and how important it is to have a good neighbor.”  When Ken started to buy other houses, he made sure they were all within walking distance of where he lived.  “I knew I wanted to live near the properties so that I could take care of them.”

In more recent years, Ken has sold several of his properties and spends much of his time working on his current home and gardens that he has lived in since 1992.  All told, Ken has lived in Minock Park for 26 years.  As a good neighbor, Ken has been a member of the Vacant Property Task Force since its beginning and a GRDC board member for 11 years.  Ken has also served as Past President and Vice President of Minock Park Block Association.

When Ken bought his current 1918 home, it was 1700 square feet.  Ken, like his father in the house in Warrendale so many years ago, has almost doubled its size. He has added rooms to house his many beautiful and unusual plants, a bigger kitchen where he cooks large and delicious meals not just for the people who live with him, but for his neighbors too.  His gardens are sprawling and various, his porches inviting and full of books on almost every topic.  There’s a grand piano in the living room and a tiny white dog who has the run of the place.  Ken is a man of many stories.  Some of them have been passed down to him.  Most are ones he has lived himself.