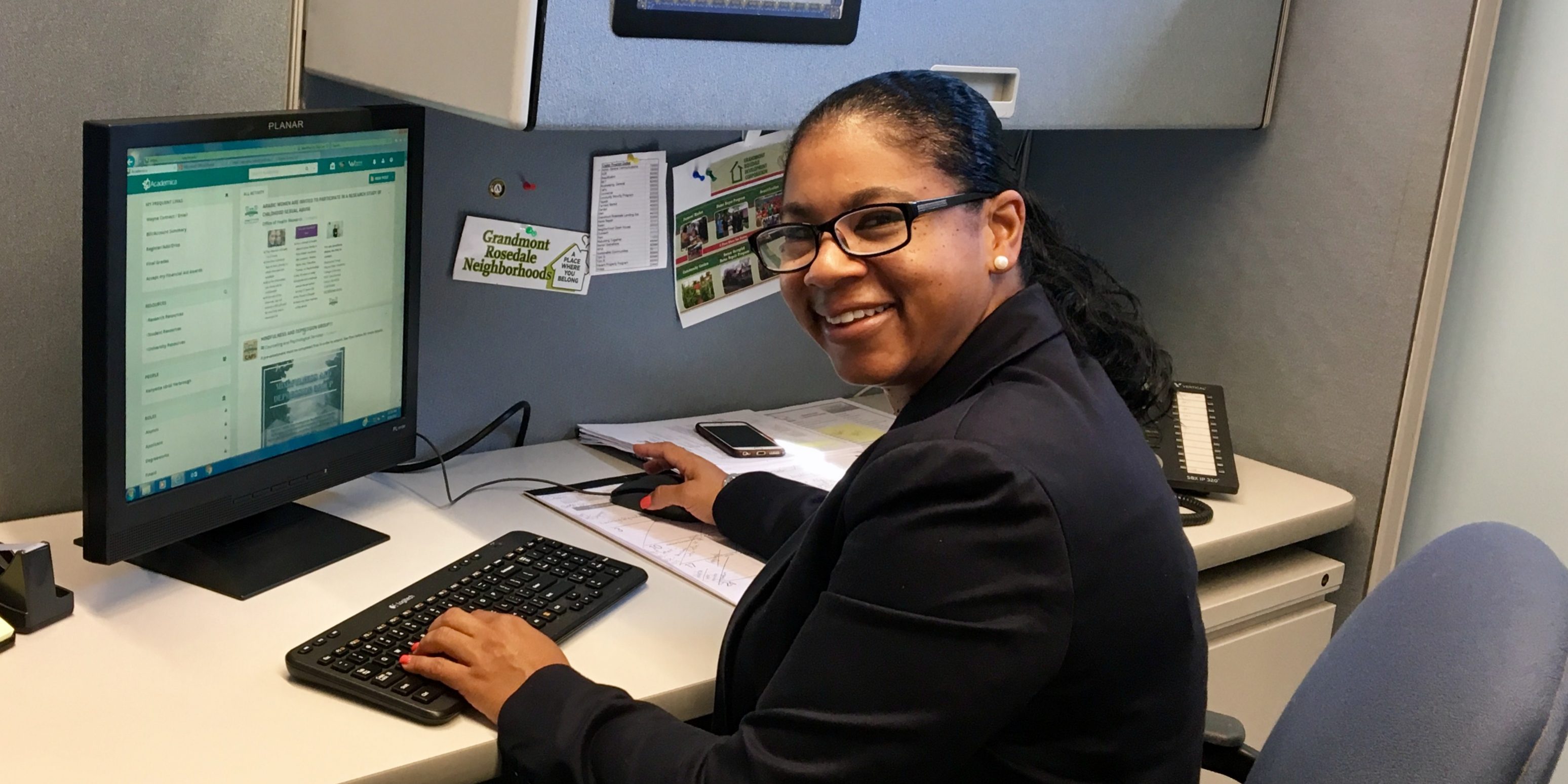 GRDC welcomes Kenyetta “Kitty” Yarbrough as our Community Security Coordinator Intern. For her year here as an intern, Kitty is focused on coordinating our Community Security initiatives, the Crime Prevention Task Force and the Neighborhood Safety Meetings. While earning her Master’s degree in Social Work from Wayne State University, Kitty also works as a Customer Service Agent at Delta Airlines, has a son, and looks after her mother, who, according to Kitty, doesn’t need much looking after, even at 92. In fact, Kitty’s dedication to serving her community, no matter where that community is, is directly inspired by her mother’s example. As Kitty says, “I think I was a social worker when I was about five. I just didn’t know it then.”

LIFELONG EXAMPLES OF HOW TO BUILD COMMUNITY

Kitty grew up near 7 Mile and Schaefer. Her mom worked as a counselor at a junior high on the East side, but her mission to help others didn’t end with her work day. “Even when we went to the grocery store, my mom would bring people who were in need home with us and feed them.” Kitty adds that her mother helped raise several cousins, had many foster children, and many others, family or not, were fed and even housed at her mother’s place. “It’s just what you did,” Kitty explains. “She showed me constant outreach to the community, to those in need.”

After Kitty grew up, she too became a licensed foster parent and moved to northern Michigan with her son to do ministry work and foster three children. Kitty ministered to communities in Cheboygan, Mackinaw City, and Petoskey, learning to love the beauty of northern Michigan and venison. When she came back home to Detroit, Kitty had to renew her foster parent license and so began researching which agencies offered the best classes. And here’s where Kitty’s story really gets interesting. When she was a kid, one of Kitty’s cousins said in passing and without any meanness, that Kitty was adopted. The comment went unexplored for years. Kitty grew up in a happy family with parents, a sister and three step-siblings who all did for others. For most of her life she didn’t need to know much more than that. She had noticed, however, that she did not resemble any family members.

At 35 Kitty learned that she had been adopted as an infant. Not only that, but the agency Kitty carefully chose to take the class necessary for her to renew her foster parent license was the same agency that she was adopted out of many years before. To meet her birth mother, Kitty traveled to Finland where she met a woman who, at first glance, Kitty knew was her birth mother. Kitty also discovered that her birth father had been living in nearby Grandmont Rosedale all her life, that he shared a birthday with her adoptive father, and that Kitty’s birth grandfather shared a name with her son. The community that forms when people share what they have, lovingly, has amazing staying power.

After earning her Master’s Kitty plans to continue her work building community. She says in fact, that she’s “learning as much as I can about community development and innovations in community development policy and leadership.” Kitty has repeatedly benefited from and benefited others in whatever community she’s been a part of, and has brought that enthusiasm to GRDC. Kitty has put her dedication to community to work in varying fields. She has worked as an Enrollment Manager and Consultant with DMC, a Human Resources Manager at Saks Fifth Avenue, Kelly Services, and Macy’s, and lately at Delta Airlines. Kitty has developed an impressive skill set with these years of diverse experience, and so has a couple of future options in mind. Whether it will be running a group home for single women with children, or working as a family advocate for patients at Karmanos Cancer Center, Kitty’s ambitions reflect her mother’s ongoing lesson to serve the community with generosity, flexibility, and kindness.