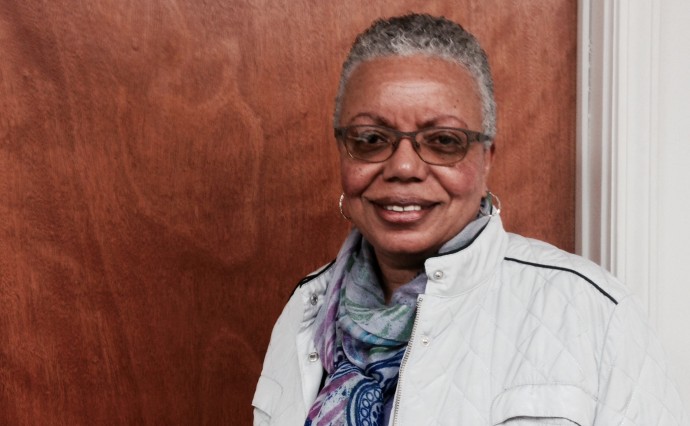 “First, I gotta rest,” says Karen Johnson Moore, soon to leave her position as the Community Security Program Manager at GRDC. Her rest is well earned. In 2011 Karen signed on with GRDC for one year to spearhead the Special Assessment District initiative for the Grandmont Rosedale communities. Karen soon realized that this project to bring a sustainable method of providing snow removal and security to Grandmont Rosedale was going to take quite a bit longer than a year. Moreover, Karen’s community organizing skills and dedication to her neighborhood quickly made her a vital part of GRDC, and so her one year position turned into two and then three and then four.  GRDC is not the only organization who had valued Karen’s work and expertise, however. GRDC’s Community Safety Program won the Bridget Vance Award for Outstanding Safety Initiatives in 2013. Designed to honor an “individual or organization that has greatly improved the community by working with others to promote a safe and healthy environment for families, residents and businesses,” this award recognized Karen’s leadership. If you’ve been to a monthly Neighborhood Safety Meeting, you know that residents learn valuable information about everything from how to keep their homes and cars secure to how to file a complaint with the Detroit Police Department. As the Community Safety Program Manager, Karen has scheduled the Neighborhood Safety Meeting topics, the speakers and even the door prizes first time attendees can win. Karen has also organized several workshops on such topics as internet safety, auto VIN etching; she has also organized several police-community relations efforts with the 8th  precinct such as the Warm Coat Drive, and has even established an annual visit to a 911 call center so that residents can learn more about how the emergency call system works. These events are well-attended and give residents a chance to speak directly with Neighborhood Police Officers, city officials and other neighbors who have similar concerns.  While Karen is leaving GRDC, she has had a great deal of experience in many projects in greater Detroit.

Karen’s first position after earning her degree in journalism from Central Michigan University was at channel 7 writing for the television promotion department. Karen has worked in both the public and private sector, but has particularly enjoyed working for non-profits. Much of her work with non-profits has been grant funded which Karen likes “because the projects are specific, finite.” Karen did important work with the Department of Housing and Urban Development, completing a housing discrimination study in Detroit for the Fair Housing Center. She was also Neighborhood City Hall Manager & Deputy Director of Senior Citizens Department under the Archer administration where she was the staff person for the Senior Citizen Commission and planned a first-time event to recognize all Detroit’s centenarians.   This event was part of the United Nations international year of celebrating the Older Person in 1999.  She also was the project manager for the year-long strategic plan for the City of Detroit Community Reinvestment Project.

While her time with GRDC marks her last in a long line of vital work, Karen says that she “learned a lot at GRDC about how to make things happen.” Even though she will no longer have keys to GRDC, she won’t stop being involved in her community. “I am inspired by the people who care and who are committed. As long as we live here we will never stop helping out in our community.” The “we” Karen is referring to is herself and her husband of 42 years, Columbus, and this year marks their 34th year of commitment to Grandmont Rosedale.