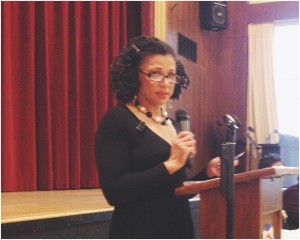 The presentation took the form of a question and answer session, which provided the audience with ample opportunity to engage with Judge Roberts in dialogue. Questions centered on the issue of jury selection. Judge Roberts explained how jurors are summoned, selected and prepared to serve for a trial. She emphasized the importance of this civic duty, which she described as being “second only to voting.”  Though she could not address the specifics of the recent conviction of ex-Mayor Kwame Kilpatrick in federal court, Justice Roberts spent a fair amount of time explaining federal bond procedures in response to audience questions.  Surveys from the meeting have shown that attendees were extremely satisfied with the content of her presentation.

In a desire to encourage attendance at future Neighborhood Safety Meetings, the Crime Prevention Task Force offered raffle tickets to individuals who brought first timers to the meeting. First timers were also given a raffle ticket, and the lucky winner for March was Ms. CasSandra Underwood. She received two Energizer emergency flashlights. This raffle will also be happening at the April 28th and May 30th Neighborhood Safety Meetings, so make sure you come out!