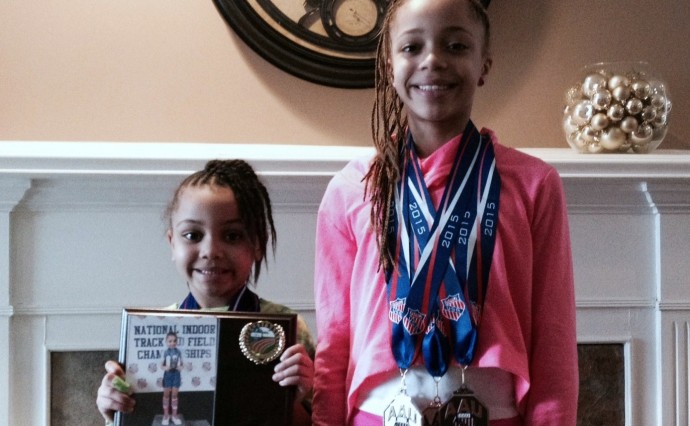 Anyone who steps foot into the home of Danni Wyche and her four children will notice right away what an athletic family they are. The house is humming with activity; all of the kids love to run and enjoy being active-especially 2-year-old Prince. Then there is 6-year-old Rashad who also plays baseball and runs track. However it is the two girls, Morgan and Jada, who stay the busiest of all-they have been competing in the Junior Olympics every year since 2013. There is a shelf near the kitchen that speaks volumes about their abilities on the track. It is filled with medals and trophies, all proud achievements of 12-year old Jada and 9 year-old Morgan. Ever since they can remember, Jada and Morgan knew they loved to run. Jada says she used to race the other kids on the block and that’s when she realized just how fast she was. Their mother took the opportunity to involve them in the sport and they became members of the Motor City Track Club, a youth track club in Detroit that has been around for 50 years.

Jada and Morgan knew they were fast, but they also realized just how much they enjoyed it too. “Running is fun,” Jada says, however neither girl is very fond of long-distance running. “I like to go fast,” says Morgan, and they definitely do. As far as long-term goals go, Jada has big plans of going to the Olympics one day, while Morgan says simply that she just wants to “keep running forever.” It seems that with their track record these are very attainable goals.

Aside from running, Jada and Morgan have both done dance as well as played several other sports. Jada enjoys playing volleyball and soccer. Morgan used to be a cheerleader and gymnast. Even though they prefer sprinting, just last year Morgan and Jada ran in the Michigan state meet, where Morgan took 2nd place in her 3K.

This year, the girls attended the Junior Olympics in Norfolk, Virginia where they competed in the 100, 200, and 400 meter races. Their mother, Danni Wyche, said she likes that they run because it “helps build character, mental strength and keeps them in shape.” Running has also taught the girls about time management. They have had to fit in their running as well as school, other extra-curricular activities, and their social lives. Running has given the girls the opportunity to make friends and stay busy, and Jada even recruited a friend to start running with her because she enjoyed it so much. This year, Jada placed second in both the 200m dash and the 400m dash where she came extremely close to beating her time of 56 seconds; she clocked in at 56.12 seconds. Morgan also did very well, landing within the top 20 girls in each race she participated in. These girls are definitely going places and they are going fast. Keep your eye out for them and don’t blink – you might miss them!