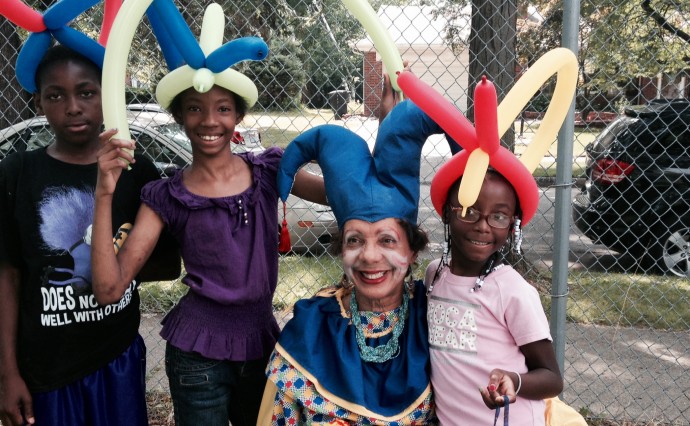 Cora Duncan-Foster of Grandmont was stumped.  How was she going to get kids to sign up for the SkillsUSA program – a program that Cora knew was a terrific opportunity for high school students to acquire skills necessary to move into the working world?  The students didn’t know Cora well because she recruited kids from high schools all over Detroit.  Cora was the coordinator and recruiter for the National SkillsUSA program at the Breithaupt Career and Technical Center and she had to think of a way to get the students interested.   And then she got an idea.  An idea so good she has used it again and again in a number of variations:  Cora had a gold tuxedo made and wore it to each of the high schools she visited as she encouraged the students to try out the SkillsUSA program at Breihaupt.  “They laughed, but they understood what I was offering them.”

Over the plus 20 years Cora worked as the SkillsUSA coordinator at Breithaupt, she not only has been very successful in getting students from all over Detroit to take advantage of the program, she has also helped train more than 20 of these student to hold office in the SkillsUSA program at regional and even state levels.  Cora herself has run and won positions on the regional and state boards as well.  Over the years Cora added a little flair to her tuxedo.  She has had working lights running along the lapels, and she has made gold hats that represent several of the programs:  a gold funnel representing automotive technical training, a gold chef’s hat for culinary training, a gold top hat with gold curls for cosmetology.  “Gold skills for a gold job,” Cora calls her strategy.  “It makes them feel good.  It makes them think ‘I can travel.  I can go to Lansing or Grand Rapids or Kansas City if I join this organization.’”  Cora loved her job.  She thought it important to “catch them before they entered to world of work.  The growth is wonderful to watch.”

When Cora was approached by her pastor to think of a way to get people to vote, Cora know right away what to do.  It wasn’t a gold tuxedo, but a red, white, and blue one.  “I was Auntie Sam!”  Again, people remembered Cora and her tuxedo and again her pastor asked Cora if she might dress up for the annual parish bazaar.  Neither the gold for the patriotic tuxedo would do, though, so Cora asked a Grandmont neighbor, Rita Neal for some help.  As a professional clown, Rita knew just the thing.  While Rita looked in her own closet for an outfit that would fit a 6 foot clown, Cora took a balloon making class at Wayne County Community College.  “Bubbles the Clown” became a regular not just at the parish bazaar, but at the health fair, the Halloween party and she even made many kids balloon hats at GRDC’s  25th Anniversary Picnic last July.

When she’s not thinking up ways to get people motivated, Cora is thinking up ways how she can make her community better.  Cora has been president of the Grandmont board of directors, she regularly writes articles for the Grandmonitor, she is a block captain, and volunteers for the radio patrol in her neighborhood.  Most recently, Cora, along with several neighbors and District #1 manager Stephanie Young, succeeded in getting a house demolished that had long been vacant and dangerous.  Cora is a woman who wears many hats indeed.