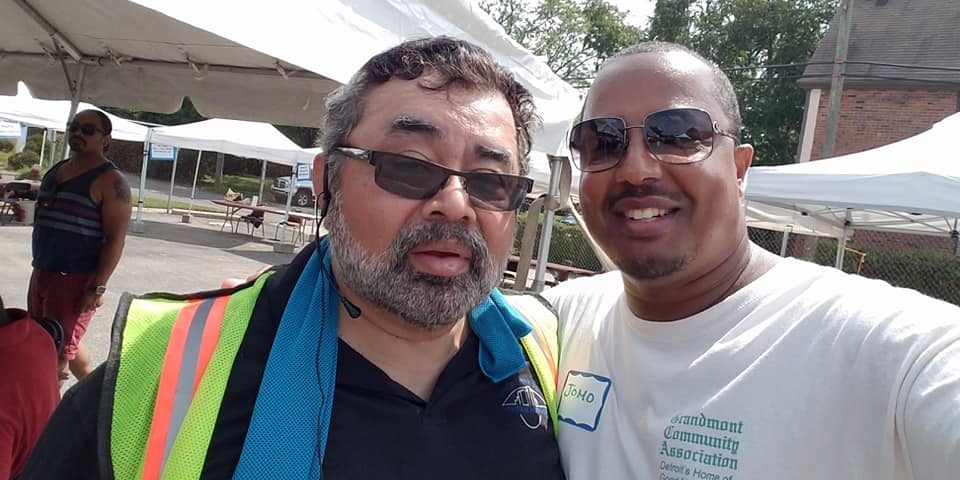 Victor Arbulu couldn’t have guessed where he’d put down his roots years after earning his MBA in finance and management. After working in small business consulting and in non-profit finance for several years, about 13 years ago, Victor was hired to be the finance manager at the now 55 year old Greater Detroit Agency for the Blind and Visually Impaired (GDABVI). He had never worked with the blind or visually impaired previous to this positon, but he “was curious.” Victor learned a great deal about the blind and visually impaired community, and eventually his curiosity became “a continuing passion. I am constantly learning.”

KEEPING THE MISSION IN MIND

Victor knew that his curiosity had turned into a lifelong passion when the GDABVI board proposed in 2010 to close the agency. After the economic downturn in 2008, the agency’s funding decreased significantly. Panic started to set in with the clients. GDABVI serves seven counties with an all-encompassing support that covers cell phone use, talking books, transportation needs, support groups and even peripheral services such as housing, food, and furniture needs. The staff at GDABVI had established relationships with their clients. The blind and visually impaired are vulnerable and thus trusted relationships are vital to them. Perhaps this confidence in the agency is what made Victor fight to keep it open: “We are trusted. We know them and they know us.” The mission of the agency was and is “to provide quality, innovative services that increase self-reliance, productivity and dignity for persons who are blind or visually impaired.” Victor wondered “how does closing service the mission?” He took a look at the books and discovered that “overhead was too high. We are a service organization and we weren’t service oriented.” Victor approached the board with his plea to keep the agency open. The board told Victor he had three weeks to come up with a budget. Victor went to work and came up with a budget that cut administrative costs and increased services. The board approved the budget and they also asked Victor if he would run the agency. Victor became the Managing Director and set to work strengthening its ties not just with the blind and visually impaired community, but with the Grandmont Rosedale community where the agency is located.

CONNECTING WITH THE GRANDMONT ROSEDALE COMMUNITY

A couple of falls ago, the Northwest Detroit Farmers’ Market hosted a Grandmont Rosedale SOUP. A SOUP event is an opportunity for four local businesses and/or residents to pitch their ideas on how to make their neighborhood a better place. GDABVI wanted to create a multi-sensory haunted house for Halloween for their clients and Grandmont Rosedale residents to enjoy. The representatives from GDABVI even dressed in costume to show their enthusiasm when they pitched the idea. It worked. GDABVI won the SOUP donations and put on a haunted house that was so spooky and fun, over 600 people came. “We had no idea how much the community wanted it!” Victor remembers. The point of the haunted house was in keeping with Victor’s plan to make the agency a familiar place in Grandmont Rosedale: “We want the community to see that we’re open and welcoming.” In the lead photo to this post, Victor is on the left with Jomo King, the organizer of the Grandmont Arts and Crafts Fair, on the right. Jomo volunteered at the GDABVI Open House. Clearly Grandmont Rosedale residents welcome community involvement.

Since becoming the Managing Director, Victor has worked to bring even more services to the blind and visually impaired. For instance, health insurance no longer covers replacement canes for the blind and visually impaired, and because canes usually last only a year, especially if they are used outdoors, GDABVI provides canes as well as training in how to use them safely. GDABVI has two vision rehab therapists, a case manager, and at any given time, interns from Western Michigan University which offers a specialized degree in vision education. This team works with clients learning braille, they teach clients how to use a talking watch, magnifiers, and how to safely navigate their homes and streets. GDABVI is a collection site for Lions Club eyeglass donations and also hosts bingo, karaoke, holiday parties, and summer youth programming. Victor is particularly proud that GDABVI also offers group therapy for people who are blind or visually impaired. Vision loss is affects every aspect of life and adjusting to this change is challenging. GDABVI provides the space for people to share their experiences and frustrations with others whose experiences are similar. “We spend a lot of time building relationships,” says Victor. “There aren’t a lot of other places for the visually impaired to go.” Victor says that there are between 23 and 24,000 people affected by vision loss and that 80% of them live in poverty. The need for GDABVI is there, and Victor and his staff work hard and creatively to meet that need.

Victor has come to know the needs of the blind and visually impaired community very well. In fact, Victor says that the greatest compliment he received came after a meeting he had with a group who was learning about the services GDABVI offered. As the meeting was drawing to a close, one of the newcomers asked Victor “How long have you been blind?” Victor is not blind, but clearly he has taken on the issues of the blind and visually impaired as his own.

The Greater Detroit Agency for the Blind and Visually Impaired is at 16625 Grand River. You can visit their website at www.GDABVI.org. For more info, you can call 313.272.3900 or email information@gdabvi.org.

The GDABVI is having their second annual Multi-Sensory Haunted House on Friday, Oct. 26 and Saturday, Oct. 27, and they’d love for you to come: 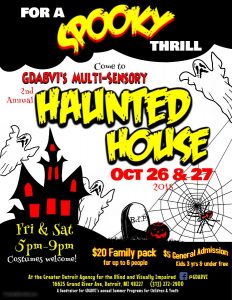