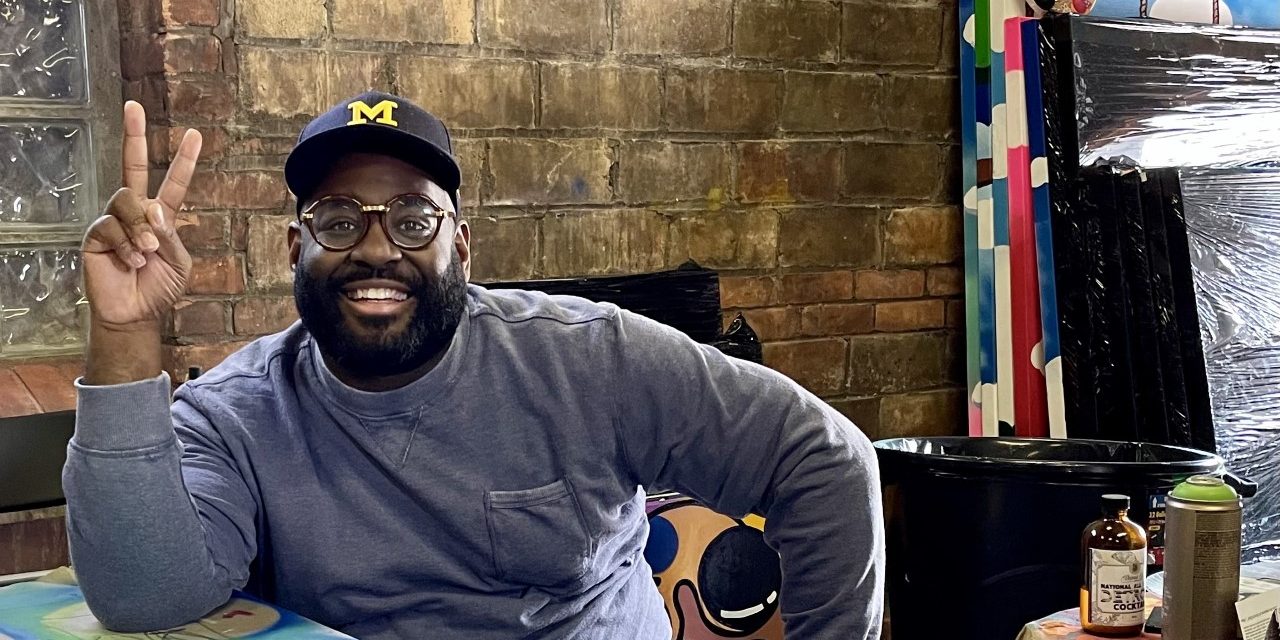 Even before he started looking for homes, Phillip Simpson knew Grandmont Rosedale was “pretty cool. Tons of gorgeous houses.” Syretta, Phil’s wife, is, as Phil says, “a Zillow girl,” and she agreed that the houses were beautiful, but what they really wanted was a community. So they did some research. Phil looked specifically for neighborhood walkability, the presence of block clubs, whether neighborhoods had activities for residents, and if there were viable businesses in or near the neighborhood. Phil’s research lead them right back to Grandmont Rosedale. Phil, Syretta, five year old Journee, and Rocky the puppy moved in last January. Their eldest daughter, Jadori, a student at Michigan State University, has a new place to come home to during breaks. “We are proud homeowners and proud parents,” and next on Phil’s agenda is to be the proud owner of a studio in Grandmont Rosedale: “That would be ideal.” Phil’s current studio is on East Grand Boulevard. It’s a great space, stuffed with Phil’s art, ideas, past projects, and experiments, but it’s definitely not walkable from where he lives.

While Phil has been drawing his entire life, early on he did give some other activities a go. “I tried sax, but the sound I made…Then I tried drums for a while. I loved basketball, but my middle school didn’t have a basketball team.” “You love drawing,” Phil’s mother suggested. “Why don’t you try that?” Phil took a Saturday art class with Young Artists & Co., and for the first time, one of Phil’s pieces was framed and put in a gallery. That art class stuck. Later, after years of art classes, years of encouragement and opportunities, Phil had a college art class that was portrait driven. Phil drew very detailed pieces with muted colors. The professor told him “If I wanted that level of detail, I would have called a photographer.” The professor made him do blind contour drawing. He wasn’t to look at the paper he was drawing on and he wasn’t to pick up the pencil. It was tough to hear and do, but it inspired him to find his own style, his own voice in his work. “I was relying on my training too much. There was no emotion to what I was doing.” Phil drew blind every day for weeks. At first his perspective was way off, but it got better. “And I kept drawing this face. Over and over.” That face Phil started drawing in 2005 has perspective, bold color, embedded elements that reflect who Phil is, and as Phil says, “Now it’s my thing.” There are currently a few iterations of that face, that smile. There are yellow, red, and blue faces, a smiling earth, a basketball smile face, and a Mr. and Mrs. Smile. Most recently, Phil has been experimenting with including gold leaf into a smile face. Whatever the color or medium though, the “P” appears in the nose, each eye has an i, and the cheeks have alternating circles, representing Phil’s affinity for the concept of yin and yang, or as he sees it, the importance of balance and wholeness. Phil’s signature and outlook is embedded in each smile.

The inspiration for the smile face came from when Phil was a kid. He first started painting smile faces on abandoned houses as a way to counter the negativity of vacant and blighted homes in the neighborhood where he grew up. The news picked up the story about a kid doing his best to improve his neighborhood, and the accolades started. This also lead to more opportunities to learn and explore the many options the art world offered. Phil worked with Tyree Guyton at the Heidelberg Project learning more about the role art plays in community. Phil stepped out on his own and developed a clothing line and opened a store called Freshman Clothing. He loved that store and struggled when the store closed. The disappointment brought that smile face back to relevance for him, “I was so sad when the store closed, I started the Smile Brand to teach myself to smile more.” Next, Phil also owned and ran the Baltimore Gallery in New Center where he learned a lot about the business side of art – which he admits he is “still learning.” Phil has worked with Sidewalk Detroit, doing live painting at the Sidewalk Festival; his smiles appear on the downtown Monroe Street Midway Basketball Courts and the temporary banner on the Broderick Tower; his portrait of Syretta, his wife, hangs at Neiman Marcus at Somerset Mall, and those faces smile from the mural on the east, exterior wall of Cutz Lounge in the heart of Grandmont Rosedale. Phil will have a show of his more recent work on Thursday, June 30 at Chroma, 2937 East Grand Blvd.

BACK TO COLLEGE, THIS TIME TO OFFER ADVICE

While his trajectory is impressive, and even fast, it comes as no surprise to Phil’s family. “I took my sketchbook with me everywhere I went. I was drawing at the Thanksgiving Day table. I still carry it with me. I’m still the same kid, thinking about art every day.” The smiling face has served him well. “Optimism is a way of life. It has opened doors for me. I greet people the way I want to be greeted.”

Not too long ago, Phil returned to a college art class. This time he was asked to speak to the art students about how he makes a living as an artist, about how he can afford to buy a beautiful home in an active community, look after his family, and still do what he loves. He attributes much of his ability to pursue his art and make a living to that smile and the simple, but not always easy, perspective of optimism. “If I have spread joy to one person, I have done my job.”

See what Phil’s up to: https://www.instagram.com/artbyphillipsimpson/?hl=en

You can even download smile sticker to your iphone! Search for smilesbyphillip 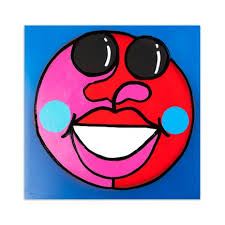