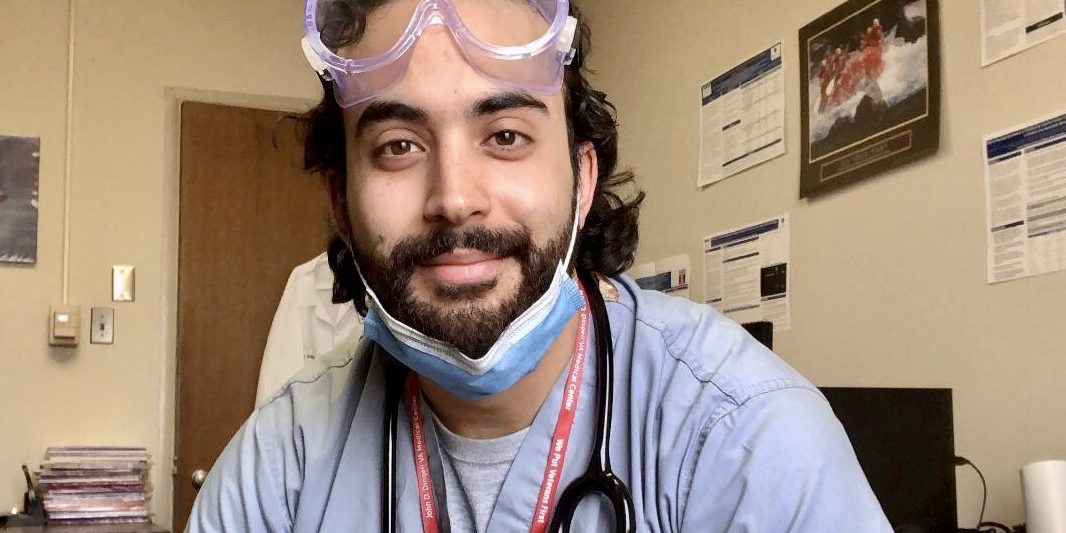 Upon receiving his medical degree in Jordan, Dr. Joud Jarrah had to choose where he wanted to do his medical school residency. After Joud listed his choices, he was matched with Flint, Michigan. He arrived in Flint in 2014, just about the time the water crisis hit Flint’s most vulnerable citizens. “It was a real eye opener,” Joud recalls. “I learned very quickly about the impact one’s socio-economic status has on their health.”

After his residency, Joud completed a fellowship focused on the study of sleep. He then began a fellowship in infectious disease in Detroit in July, 2019. In April 2020, Joud went back to Jordan to visit family, just about the time the COVID-19 pandemic began. He made it back to the United States on one of the last flights out of Jordan. The lessons Joud learned in Flint about the relationship between socio-economics and health again came to the fore. Detroit withstood one of the highest mortality rates in the country as COVID-19 hit. As Joud explains, “What was most consistent about those who died was the fact that they were all health disadvantaged. 1/10 of those who were infected, died. That’s high in the world of medicine; it’s like the pre-antibiotic era.”

DISCOVERING THE IMPORTANCE OF COMMUNITY IN MEDICINE

One of four sons, and the only son to pursue medicine like his father, Joud thought deeply about what kind of doctor he wanted to be. No matter the specific medical discipline, Joud set out to understand how he, as a doctor, could serve his community. Joud learned from his father that medicine “is a noble, human profession.” Joud found that the experience of medical school did not always emphasize this, however. “Medical school can be very individualized and competitive,” Joud says. The competitiveness was not something he wanted to emulate as a physician or as a man. It “weighed heavily on me. It was not a match for my personality.” Now on the front lines during the COVID-19 crisis in Detroit, Joud’s approach has paid off, for him as well as for his patients. “I have a more cooperative approach. I learn from others and they learn from me. I am much more at ease.”

Joud works at Detroit Medical Center, rotating between Harper Hospital, Receiving Hospital, and the Karmanos Cancer Institute. His best days at work are when a patient makes it off the ventilator, and “when I present patients to a group of over 40 physicians via Zoom. That sharing of knowledge is wonderful.” Joud’s days are both difficult and hopeful. “People are reimagining a ways of life, the climate is healing, families are reconnecting, and the medical world is sharing knowledge and treatments faster and easier than ever.” Joud admits that when the virus first hit, he would have been hard pressed to find some hope, but the numbers of people who are sick with COVID-19 are decreasing. “The sick ones are still quite sick, but now there is more time, so I can give more attention to those who are sick.”

After about a year in the States, Joud met Meghan, a member, like Joud, of the Baha’I Faith community, and a native of Petosky, Michigan. Over time, Meghan got to know the culture of Jordan, and the two began to think about the possibilities of living in both Jordan and Michigan, considering both of them home. In 2016 Joud and Megan married and lived in an apartment in Flint. Once Joud got word that his fellowship was in Detroit, Meghan began looking for a place in Detroit for the two of them to live. At their apartment complex in Flint, Joud and Meghan felt no connection to their community or neighbors. Neither of them wanted to live like that in Detroit. “We believe in human connections,” says Joud. “We hoped to move to a neighborhood where there was a sense of community.” Joud was working back to back shifts in the Intensive Care Unit, and so Meghan, who works in Student Affairs at Michigan State University, set out on her own to find such a community. Meghan did some research, then went on a tour of Grandmont Rosedale. The homes and tree lined streets were lovely, but what really got her attention was the fact that there was a neighborhood association. The neighborhood association was “a sign of a real community, a real sense of a neighborhood. I said yes before I saw the house,” says Joud.

Not long after Joud and Meghan were in their home, Joud was approached by Pam Weinstein, a resident who makes community happen in Grandmont Rosedale, and of course an association member. Pam asked Joud if he would be willing to be a block captain. “I gladly accepted,” says Joud, who now attends block captain meetings, learns ways to reach out to neighbors, and helps “strengthen the bonds of the community.”

The Grandmont Rosedale community, with its parks and gardens, its neighborhood associations and wonderful neighbors has become vital to Joud’s work as a front line physician. Joud has been treating COVID patients for nearly two months. Taking care of his own physical and mental health is imperative. Joud learned the impact of sleep on the immune system and mental health from his sleep fellowship, and so is careful about getting enough sleep. And every day, to wind down, Joud puts on some music, and goes for “a walk in my beautiful neighborhood. It’s one of the best therapies I’m doing for myself.”

During the pandemic, his neighborhood has become ever more important for Joud. Meghan has been living in Petosky with her parents for the last several months because she is due to have a baby girl in July. Both she and Joud thought it best that she shelter in place away from the exposure Joud’s work causes. The two of them catch up every night sometimes watching a movie together on Zoom. They have narrowed the list of names for the baby to about 10. Having a baby girl on the way is certainly a bit of beauty in an otherwise difficult time. “I believe things will get better,” Joud says. “That helps. That, and the walks through the neighborhood.” 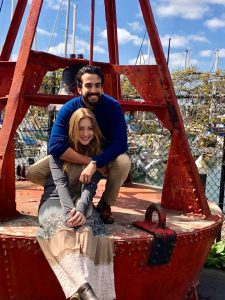