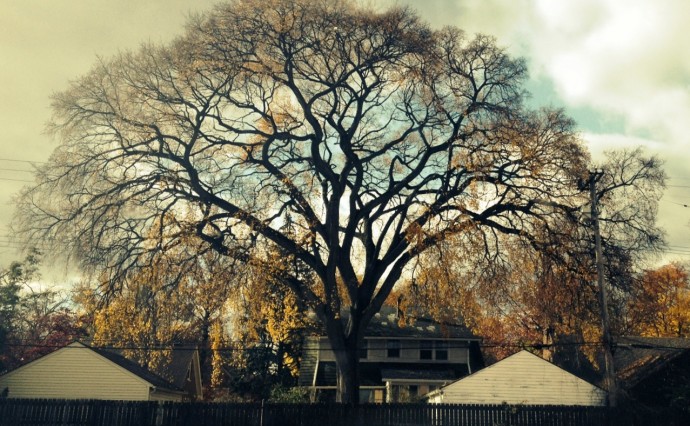 Decades ago, the Grandmont-Rosedale neighborhoods were known for arching canopies of trees lining the streets, creating tunnels of green and dappled light on many blocks where tree branches touched high above the street.

Then Dutch Elm Disease hit, devastating the tree cover and leading to clear-cutting of city streets. While maples and oaks remained, the stately old elm trees were largely gone.

One of the few elms to have survived the epidemic is still thriving here in Grandmont-Rosedale, thanks to the loving care of homeowner Kathy Rowland.  In the back yard of her home on Glastonbury in Rosedale Park stands a nearly 100-year-old Dutch elm, its extensive canopy visible from Grand River and from Grandland shopping center.

Rowland says she spends a thousand dollars or so every other year for a tree specialist to infuse the tree with disease-fighting chemicals and otherwise maintain its health.

Her house, a beautiful stone bungalow with an expansive front porch, was built in 1918. Rowland raised her three now-grown sons there and now she and her husband are empty nesters. She’s pretty sure the tree is at least as old as the house, and may be among the oldest trees in the Grandmont-Rosedale neighborhoods.

She’s had tree surgeons tell her it would take between $10,000 and $15,000 to remove the tree, making the money she’s spent on it over the years into a good investment. It also helps cool the house and turns a beautiful golden yellow in the fall, which makes it more precious. “I’m just that type of person who would not take the tree down,” she says.

Rowland remembers growing up in Detroit and having to head inside as a child when the city would come through and spray for Dutch Elm disease. It’s those memories, as well as an appreciation for the tree’s beauty and usefulness, that spurs her to maintain it. “Every time a big storm comes through I worry about it,” she says. But for now, thanks to her efforts, the tree is still going strong!