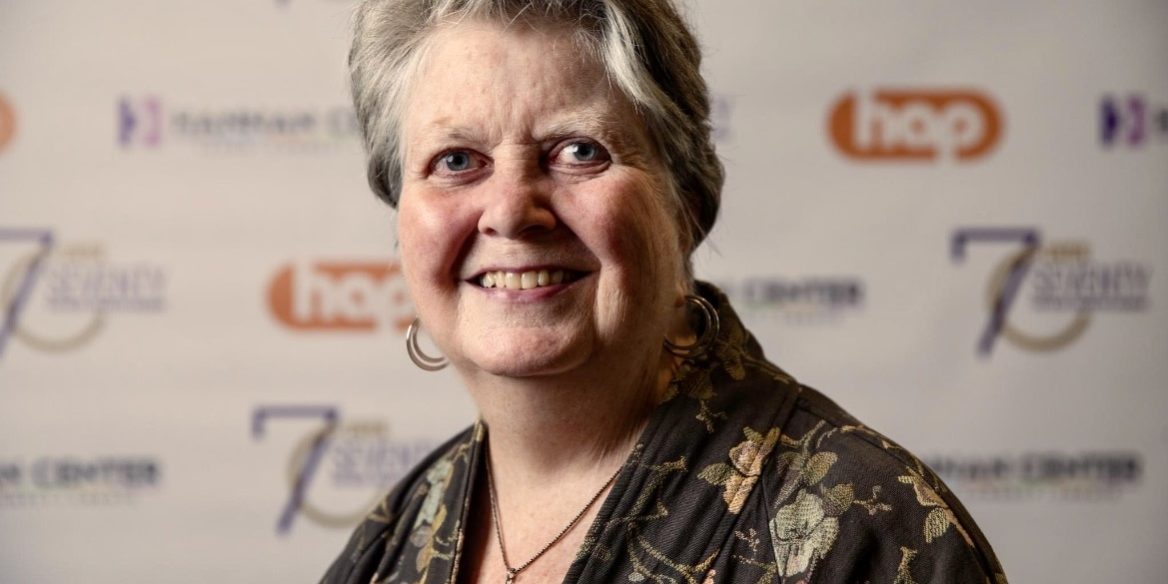 Eileen Frey is an outstanding citizen in the Grandmont Rosedale community. Anyone who has lived in the neighborhood for any significant amount of time has most certainly met Eileen. She recently received an award from Hannan Center called “The 70 Over Seventy Next Chapter Awards.” This award is given out to older citizens in the state of Michigan who have proved that impact is timeless. As the Hannan Center themselves say on the awards page, “The 70 Over Seventy Next Chapter Awards, presented by Hannan Center, represent the human potential that continues and in many cases increases with age. Awardees reflect the diverse interests, accomplishments and lifestyles of older people in Michigan.” She has left an impact on many people in many spectacular ways, especially relating to the worlds of social work, teaching, and community organizing. She has an amazing history and continues to leave a legacy.

Eileen grew up in a very big family in Michigan, because of this, she was constantly attending various family events. Eileen found some levity in the fact that, “in a big family, we were always going to funerals, it’s part of life.” She had a great relationship with her parents, and they were both hard-working people. Her mom became a nurse when Eileen was in 3rd grade, and her dad worked in a Ford factory after farming.

Before moving to Grandmont Rosedale, Eileen lived about 3 miles outside of the neighborhood, near 6 Mile and Schaefer. Her husband, Bill, was born in Dearborn Heights, but he moved to Detroit later on in life, which gave him the opportunity to become friends with Eileen, and they eventually married. The newly wed couple moved to Grandmont Rosedale in 1976, and began a life together here in this beautiful neighborhood.

Going back in time a bit, Eileen got a Bachelor’s in English and Social Studies at University of Detroit in 1972. This degree then gave her the opportunity to teach History courses at Bishop Borgess High School. At this time in her life, she lived in a smaller house in Grandmont Rosedale but needed more space, which is what prompted her to move into the home that she lives in now.

Her time teaching at Bishop Borgess was only a part-time teaching position, but she moved on to get her Master’s in Education from University of Michigan in 1979. This Master’s degree opened up doors for her to teach at a number of other academic institutions! There are a few remarkable things about this whole situation. Something truly remarkable and wildly impressive about this, is that she also went on to get another Master’s degree later on, a Master’s in social work, which became a big part of her life and had lasting impact going forward.

While working towards her Master’s in social work at Wayne State University, she had an assignment to participate in an internship in community organizing. This was in 1989. She already lived in Grandmont Rosedale, and she found herself watching the baseball league in the neighborhood begin to form. She got involved with Grandmont Rosedale Development Corporation (GRDC) for an internship, and she was really attracted to how organic it was, and how they did what they did by simply having visionary conversations around a table. The community projects that GRDC worked on (and continues to work on) were based around talking to people in the neighborhood, hearing what their concerns and needs were, and acting upon those. She’s had several internships and teaching positions that add to her overall lasting impact. 10 years later, she earned her Master’s degree in Social Work from Wayne State, which was a monumental milestone.

HELPING OUT AT GRDC

Fast forward a few years, Eileen worked with most of the University of Michigan interns at GRDC. One of the first of these interns was Becki Kenderes, the Program Director at GRDC. Eileen helped these interns in their community work, and for some of them in their social work ambitions. Now, Becki is soon to be a licensed social worker, and will then be the one doing the supervision.

Eileen’s lasting impact in the realm of social work, community organizations (most notably GRDC), teaching, and so many other things are worth talking about and acknowledging. This 70 Over Seventy award embodies the fact that age is timeless, and impact continues and increases with age. This accurately defines Eileen and the impact that she has left on so many people, especially people in the neighborhood.