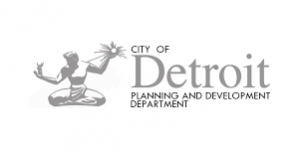 Earlier this year, the Detroit Planning and Development Department (PDD) hired a consultant to develop “framework plan” for a large area of Northwest Detroit including Grandmont Rosedale, Old Redford and other nearby neighborhoods. The consultants examined a variety of issues such as streetscape design, green storm water infrastructure and mobility. The draft plan envisions a new park on the site of the old Rogell Golf Course, a greenway along the Rouge River and improvements to the Grand River commercial corridor. Two primary areas along Grand River will be the focus of this strategy — one at the intersection with Lahser and the other in Grandmont Rosedale.

A series of public meetings were held as part of the planning process to gather input from residents. Advocacy by GRDC and Grandmont Rosedale residents ensured that our community would be included as a target area for streetscape improvements. Additional meetings with residents and business owners this summer will provide more opportunities for community input.

“We are still waiting to see the details of what will be proposed,” said Economic Development Program Manager Larissa Carr. “However, we believe that public investment in streetscape improvements are critical to spurring new private development along Grand River.”

You can read more about what is being planned at www.detroitmi.gov/Northwest.