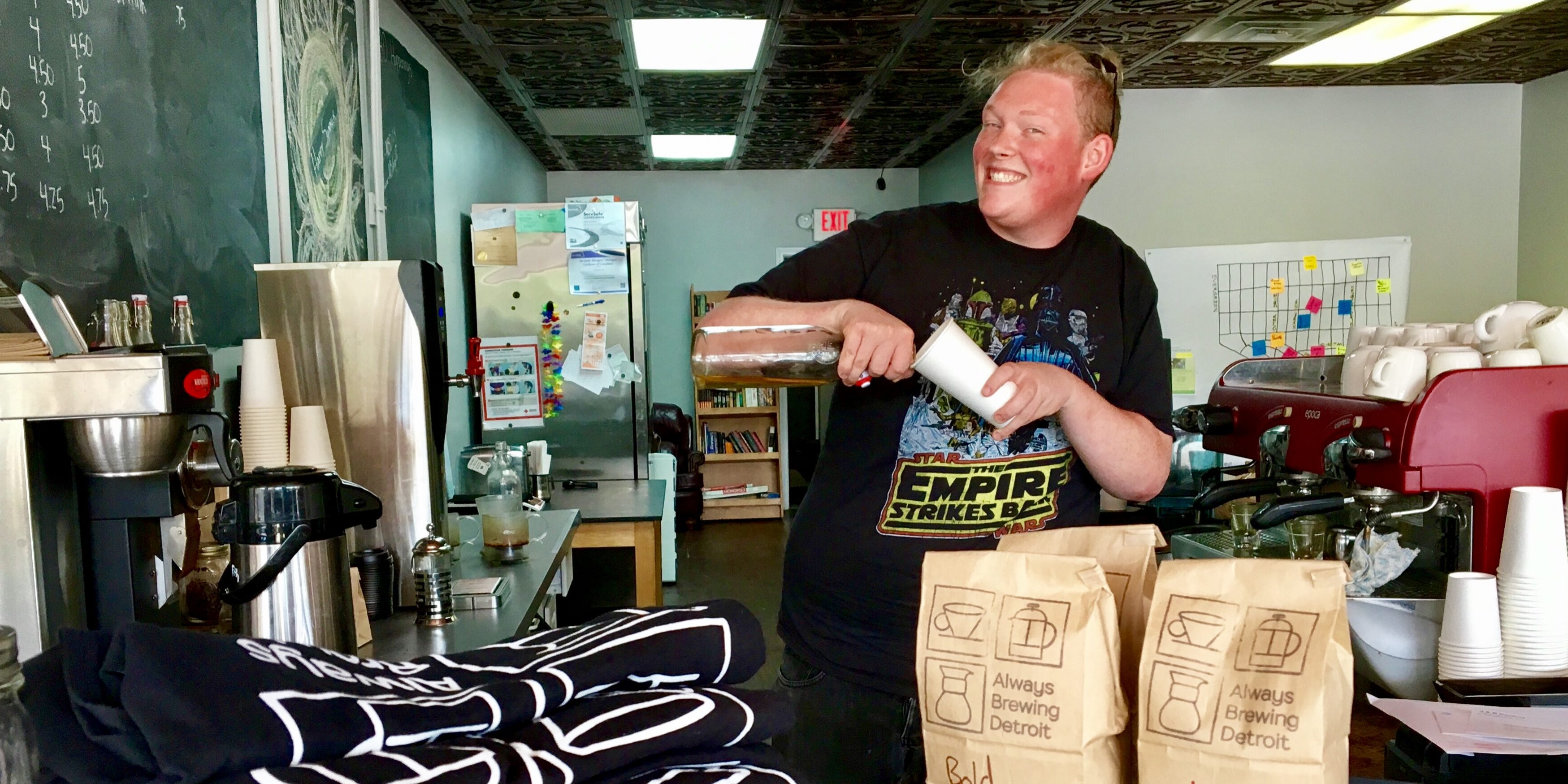 Most days you can find Cody Williams hard at work at Always Brewing Detroit, the coffee shop familiar to many people in Grandmont Rosedale at 19180 Grand River. On the second and fourth Thursday of the month from 4 – 8pm though, you’ll see Cody at the Northwest Detroit Farmers’ Market instead, offering up organic, fair trade coffee, and, more recently, cold brew coffee. While the coffee shop is fairly busy, Cody hopes his presence at the Farmers’ Market will draw more customers into his shop. Sure enough, a customer who tried some of Cody’s cold brew at the Market stopped by the shop to get some more and to learn just how Cody makes this new and increasingly popular brew. This customer talked to a gym friend of his about the cold brew too, and that’s how businesses grow, especially in Grandmont Rosedale. Cody frequently hosts events at Always Brewing and is a believer in the power of social media to get the word out about his shop, but he readily admits that word of mouth in such a close-knit community is his most effective marketing tool.

Always Brewing has become a hub of the Grandmont Rosedale community. The coffee shop is the meeting place for friends, co-workers, clients, and families. On any given day you’ll find solitary people hard at work, a dad and his son having a coffee/hot chocolate break, neighbors planning how to make their neighborhood a better place, and then there’s the reliable crowd of friends who gather every Tuesday morning to reminisce, catch up, and show off their grandbabies. Cody readily recognizes that the former owner of Always Brewing Detroit, Amanda Brewington, created this atmosphere of community at the shop, and Cody has every intention of continuing it. As he says, “To run a business, you have to look at the potential market around the business, you have to get to know the community. If you do not have the community, you can’t run a successful business. This is such a strong community – I wouldn’t be able to sustain my business without the community’s support.” Being in Amanda’s shadow hasn’t been entirely easy. “I’m a young, east side kid, an unknown, and I changed some things.” The Grandmont Rosedale community is very loyal to neighbors and neighborhood business owners, no doubt, but not unreasonable. Once the neighborhood saw that Cody was here to stay and that he wasn’t interested in changing the culture of the shop, he just had to make it his shop, the customers welcomed Cody and his ideas for the new Always Brewing Detroit.

As a sculpture and ceramics major from Wayne State University, it’s not surprising that there’s an emphasis on art at the shop. The art changes frequently, and often includes work by Cody’s art school friends and artists in the Grandmont Rosedale community. Cody’s path to owning his own coffee shop began years ago. He has always been interested in food. Early on, his dream was to own a small breakfast place that had art. A coffee shop that featured art was the next best thing. Besides, Cody has recently added breakfast “Sammies” to his menu and so, you could say, his earlier dream has been fulfilled. Cody also offers a variety of teas and a changing selection of pastries. Cody is hoping to include soups made by Greenhouse Soups and Chili, another Farmer’s Market vendor, during the Market’s off season. Just like Always Brewing, the Farmers’ Market has become a hub where not just neighbors and friends meet up, but where business owners forge new relationships. Just as the community strengthens as it expands, so too does the business Grandmont Rosedale business community find strength in cooperation. With all of the changes and adjustments Cody makes to the shop, he always has the community in mind. “I’m excited,” he says. “With the businesses opening up on Grand River, I might have to change my hours and maybe even offer desserts, but I’m relying on the residential and business community to direct the changes. The shop has to be community driven.”

Cody comes from a neighborhood where people move in and out fairly frequently. “You probably know your next door neighbors, but not many people beyond that. This is a different kind of community. The time and energy residents put into this neighborhood is amazing.” Cody too has not hesitated to jump in. Currently he’s working on getting recycling for businesses along Grand River. It’s cheaper if he can get a few more businesses to share the expense, so he’s talking to some other business owners. Clearly Cody’s learned something about community engagement. It’s no surprise, really. Some of the most gifted and effective community organizers in northwest Detroit frequently stop by his shop for a cup of coffee and a bit of conversation.

Check out https://www.alwaysbrewingdetroit.com/ for more information about Cody’s shop.