Cassie Richard and Sabrina Bergman, a Change in Community Security Staff at GRDC 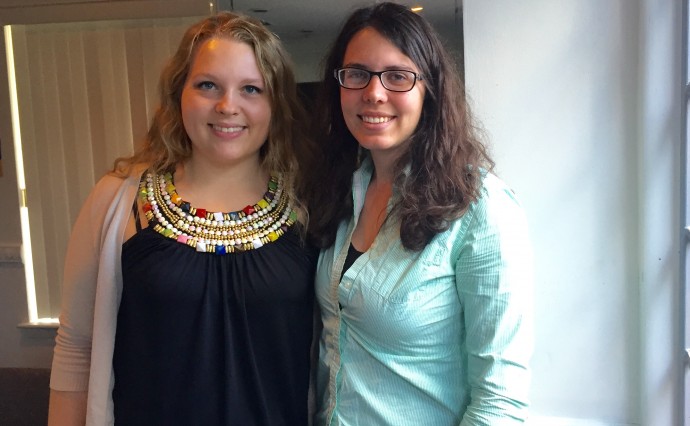 Cassie Richard’s term as GRDC’s Community Security Coordinator and Americorps VISTA ended in August. Her time at GRDC was filled with getting to know the Grandmont Rosedale community, and helping to create a safer Grandmont Rosedale through organizing Neighborhood Safety Meetings, special community safety workshops, and meeting regularly with the Crime Prevention Task Force. Upon graduating from Eastern Michigan University, Cassie was drawn to GRDC’s comprehensive approach to neighborhood. Cassie cites Karen Johnson Moore, GRDC’s recently retired Community Security Program Manager as “a wonderful role model, a great community advocate.” Cassie will remember too the group of volunteers she has worked with in her year here as “committed. They make the community what it is.” GRDC will miss Cassie’s cheerful demeanor and ready commitment to the Grandmont Rosedale community. Cassie’s got her sites on becoming president, yes the president. She won’t be old enough until the 2028 election, but in the meantime she will take what she’s learned at GRDC to effect positive change in other communities.

Sabrina Bergman joined GRDC just as Cassie headed out. Like Cassie, Sabrina will be working with the Crime Prevention Task Force, organizing the Neighborhood Safety Meetings and will continue the work on the Special Assessment District, the initiative to ensure security and snow removal for Grandmont Rosedale. Sabrina knew from a young age that she was interested in understanding what motivates people. As she got older, Sabrina also learned that she did not want to be in an office all day. Instead, she wanted to be directly involved with people to make the positive changes people wanted in their communities. When she applied for her Americorps VISTA placement, Sabrina chose GRDC because of its active engagement with the community. It was a perfect fit: “I was impressed with the power this community has over its own well-being. This community is super involved.” We are the kind of people Sabrina was looking for. The Grandmont Rosedale community is indeed a community that understands the power of empowering ourselves.