Beautification of Stahelin Celebrated with Dinner on the Avenue 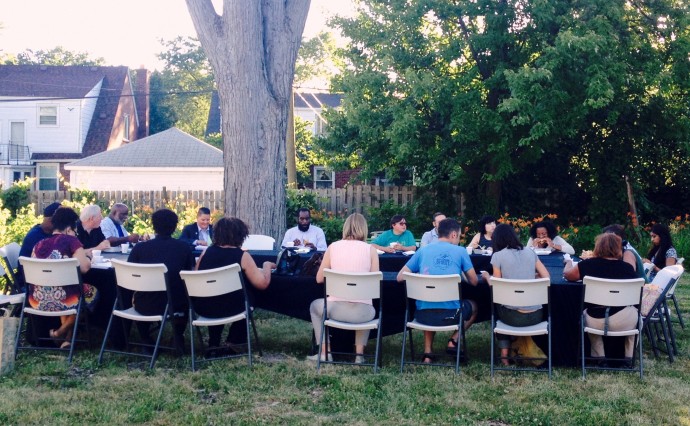 The landscape of Stahelin Avenue between Puritan and McNichols has changed dramatically since North Rosedale Park resident Beverly Frederick first began volunteering to clean-up the area in 2004. Since that time, abandoned homes have been demolished, thousands of pounds of dumped trash has been removed and drug houses have been eliminated with the help of several police raids. Green infrastructure, in the form of wild flower fields, rain gardens and 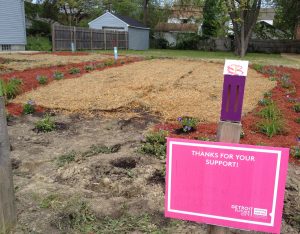 tree plantings were added to 15 vacant lots on Stahelin just last year. This summer, with grant support from Detroit Future City, Beverly Frederick is building upon past successes, adding even more flowers to the street by establishing a butterfly meadow near McNichols.

“I have always seen the potential that exists on Stahelin,” said Beverly Frederick. “Now others are finally starting to see the vision as well.” As one of 15 recipients of Detroit Future City’s Field Guide to Working with Lots mini grant program, North Rosedale Park was awarded $4,000 to establish a butterfly garden at 16838 Stahelin. Together, with other volunteers, Beverly planted geraniums, yarrow, lilies and other wild flowers that will attract butterflies to the site. The project also included a partnership with nearby Cooke Elementary School to involve students in painting and hanging bird and butterfly houses throughout the garden.

Her work did not go unnoticed. A drive down Stahelin often reveals children playing in the garden, residents riding bikes and neighbors lounging on newly installed benches. Just last week, Detroit Future City hosted a bus tour of the lots,

bringing folks from across to the city to observe and to be inspired by the efforts that have taken place on Stahelin. The tour included a lot maintenance demonstration by Keep Growing Detroit, and dinner on the avenue catered by Redford Café.

Thanks to Beverly Frederick and many other volunteers, the future 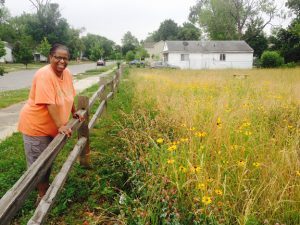 quality of life in Grandmont Rosedale remains bright.  Before the summer’s end, a few additional features will be added to the street including bike racks, an information station and a permeable parking pad (funded by Project 561 and Great Lakes Clean Communities Network respectively). For now, Beverly Frederick is hard at work planning a grand opening celebration to be held—most appropriately—on the morning of “Neighborhood’s Day,” August 6, 2016. Save the date!