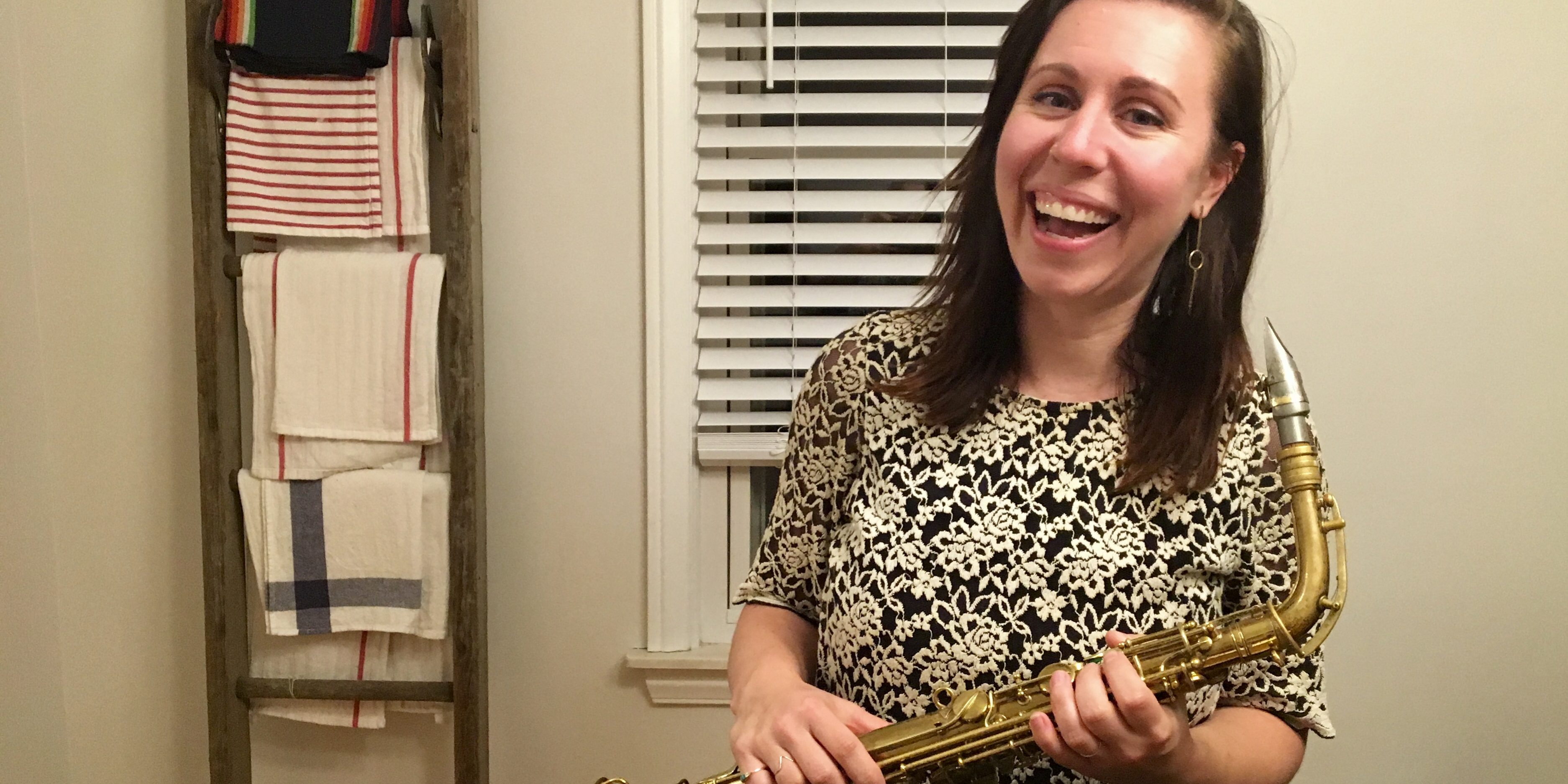 One Saturday morning last September a group of about a dozen musicians on horns and drums rehearsed in a Grandmont Rosedale backyard for a couple of upcoming performances at two nursing homes. The musicians arrived impressively promptly at 10, wearing their own versions of the band “uniform” – anything they could find that was black and gold. (One member wore black jeans, a gold lamé vest and a gold, plastic crown complete with “jewels” of red and blue and green to set off his red red hair). They gathered in a circle to go through the numbers they were to play, chatted some about timing and rhythm, and then loaded into a converted school bus that was painted entirely black with a stencil of a cat, “Catawampus,” (defined as “fierce” and “awry”), and the world. This seemingly disheveled, maybe ragtag group is the Detroit Party Marching Band. It’s pretty much a sure thing that you ‘aint seen nothin’ if you ‘aint seen the Detroit Party Marching Band. They are more fun than a barrel of monkeys and a day at the circus – actually they are a lot like a barrel of monkeys at a circus – with instruments.

WHO’S HAVING THE MOST FUN?

Maybe the best part about this band is that fun is their main goal. They clearly have fun while they play, but they also do their best to be sure that anyone within hearing distance has fun too. Like traditional marching bands, the Detroit Party Marching Band has the usual variety of brass instruments, from clarinets to trumpets and of course a selection of drums. From here though, the band quickly veers into the non-traditional. Some of the uniforms might remind you of marching band uniforms, others of pajamas. They are mostly black and gold though. They also do not march in formation. Not even close. Instead, they want to engage their audience, involve their audience. They want their audience to have as much fun as they are having. As Grandmont Rosedale resident and alto sax player Emily Dieppa says, “We intentionally pull people into our space or we put ourselves into their space. There’s a joy that occurs as a result. It really becomes a shared experience.”

In spite of the joyous mayhem that the band both produces and inspires, they do have a pretty organized way of deciding where and who will perform. There are about 25 members in the band, but not all of them need be present for a performance. The organizers are band members whose turn it is to organize, or who simply find that they’re pretty good at organizing. They make sure that enough members on a variety of instruments are available before they promise to show up. Emily explains: “We need a minimum for each section and people sign up. If not enough people sign up, we don’t take the gig. If a band member complains, then they’ll serve on the committee to organize. We have never cancelled a gig. It’s not always pretty, but if we commit to something, we’re there.”

The band has traveled to Texas to perform and even as far as the Netherlands. The band My Brightest Diamond approached the Detroit Party Marching Band to come to the Netherlands for a project that, according to Emily, “highlighted the role of music in funeral processions. The lead singer of My Brightest Diamond, Shara Nova wrote a processional for the Party Band” and was able to secure a grant that paid for the trip, including the transportation of the instruments. The Party Band played four cities, and left quite an impression. In the video clip below you can see just what The Detroit Party Marching Band is all about, and boy did the Netherlands enjoy their mayhem. The video was shot in Rotterdam after a day of solo performances as the audience was leaving. The Party Band knew they’d be causing a ruckus in that space, but the audience didn’t.

The clip shows another important feature of the Party Band – sometimes they just show up, or, as Emily describes it, “We also just crash.” They might crash a bar or an art museum, but it isn’t completely unplanned. They send in a scout, no instrument in hand, to be sure they won’t disturb someone else who’s there making music. And that, really, illustrates the spirit of the Party Band. As Emily says, “We’re not out to upstage anyone, and it’s not just about the music. It’s being able to connect with people in the band and in the audience.”

The members of the Party Band find at least as much pleasure being in the band as those who get to hear and experience the band. Grandmont Rosedale resident Emily spends her workdays as the Executive Director of Care Path Career Center, an organization dedicated to supporting home care workers. Another band member works at a diner in Hamtramck, another is retired fire chief, one is a free-lance photographer, another is a free-lance editor with two kids. Whatever their work life, all the Party Band members find time to practice once a week, and, when performing, get to be a part of something fun, something a little crazy, and a player in the story their audience will tell about this crazy band they saw in a bar, or (not really) marching down the street, or that just showed up while they were waiting in line at a restaurant. It’s just fun, and fun is good.

You can try to keep up with the Detroit Party Marching Band by visiting their Facebook page: https://www.facebook.com/DetroitPartyMarchingBand/

Here’s the Party Band tearing it up for the departing audience of the Cross Linx Rotterdam Concert: