For More than 70 Years, the Traditions of Leddy’s Candy Store Live On 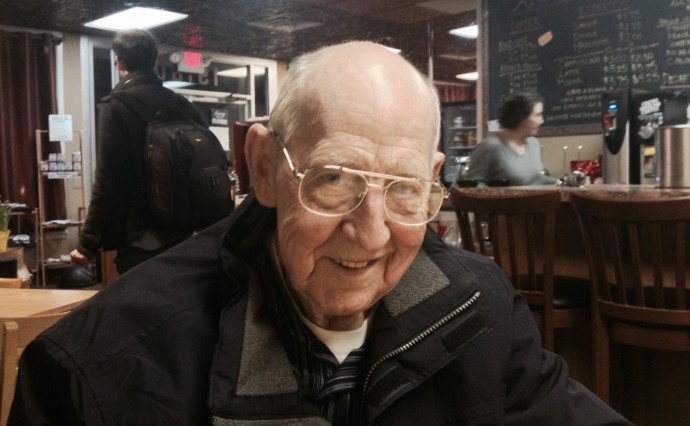 First of all, Mr. Leddy is not his name, although most who came into his store throughout the 60s, 70s and clear through to today, know him as Mr. Leddy. His name is Art Nall and he bought Leo Leddy’s Wholesale from his father-in-law Leo Leddy in the mid-1960s. When he bought the store, Art kept the name Leddy’s for continuity. “Salesmen and customers who didn’t know me called me Mr. Leddy. I thought if I tell them I’m not Mr. Leddy then I’d have to tell them the whole story of how I came to own the store and I’ll never get any work done.” So Mr. Leddy it was and still is for some people who come in even now and see “Mr. Leddy” still putting in an occasional day of work behind the counter.

After Art Nall got out of the service in 1952 he found work in a tool and die shop and hung out at the VFW Hall in Brighton. Soon Art met a girl named Mary Helen Leddy and the two hit it off. They went to dances at the VFW hall and took in an occasional movie at the Norwest Theater on Grand River. Mary Helen was one of Leo Leddy’s nine kids and Leo was pretty particular about who his daughter was seeing. When Art asked Leo’s permission to marry Mary Helen, Leo asked just what Art had to offer. “Well, I just got out of the service and I have a job,” Art replied. “Do you have a car?” “Yes.” “How about a house?” “Well, no, not a house.” “I’ll think about it,” was about as much as Leo would allow.

About six months after Art and Mary Helen were married in 1953, the tool and die shop closed. Art started working at his father-in-law’s candy store as a way of making ends meet. In the mid-1960s Leo purchased another business next door to the candy store and was struggling to run both businesses. By this time Art had worked at the candy store for several years and he offered to run the candy store. After another couple of years Art had thoughts of owning the store. He didn’t yet have enough to buy the store, so Leo agreed to sell it to Art on a land contract. “After all,” Leo said “I don’t think you’re going to run away on me, but you can’t call it Leo Leddy’s Wholesale, just Leddy’s Wholesale.” And so, Art Nall became owner of Leddy’s Wholesale.

Over the years, Art Nall figures he has mentored over 100 kids at his store teaching them how to ring up candy, stock the shelves, answer the phone, and help customers. ”I loved it!” he says of watching the kids grow. “I always hired kids from the neighborhood.” He has seven kids of his own and all his boys have worked there at one time or another. It’s no longer called Leddy’s though. Its new name is Janco Distributors, Inc. JAN are the initials of the new owner, Jim A. Nall, Art’s son who sometimes goes by “LJ” or Leddy Junior. Like his father, Jim mentors kids from the neighborhood. The mentoring program is for 13 – 16 year olds who could very likely find themselves working at the candy store one day. “I teach them everything I know,” says Jim as he stops his brief lecture about the differences between high fructose corn syrup, glucose, carbohydrates and sugar. All of his employees live nearby and last summer Janco Distributors sponsored the Grandmont Arts and Craft Fair. Whether they go by Mr. Leddy, Jim, Art, LJ, or Mr. Nall, the owners of the wonderful candy store on Grand River have a commitment to this community that is as true as it is long.

Jim Nall and his mentee Cameron and employees Rhondee and Jasper: 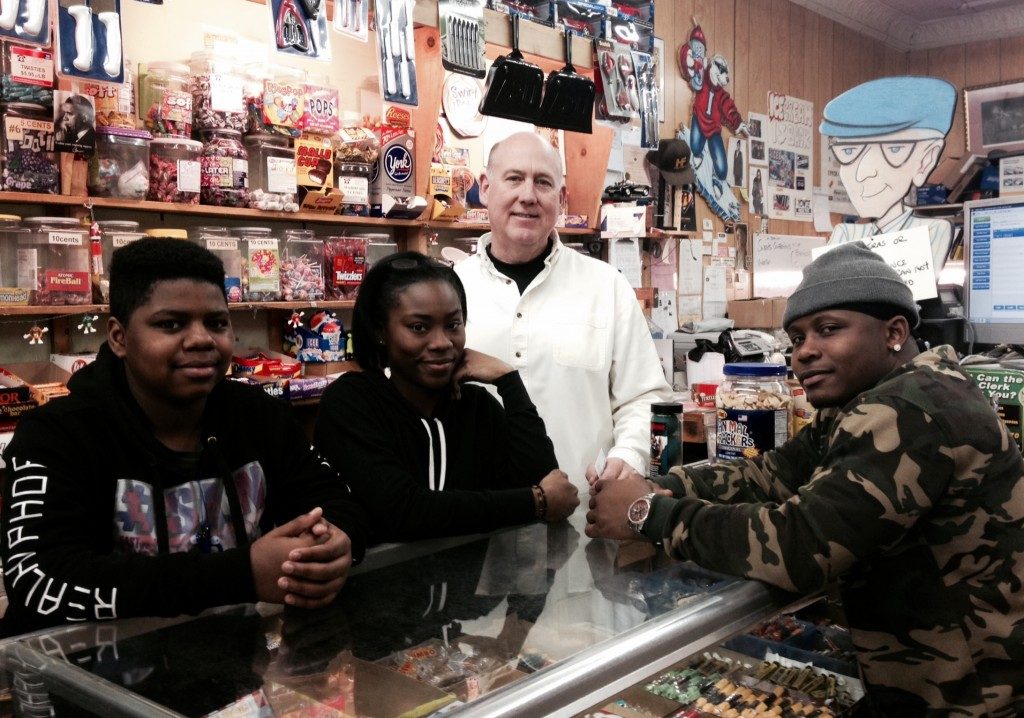