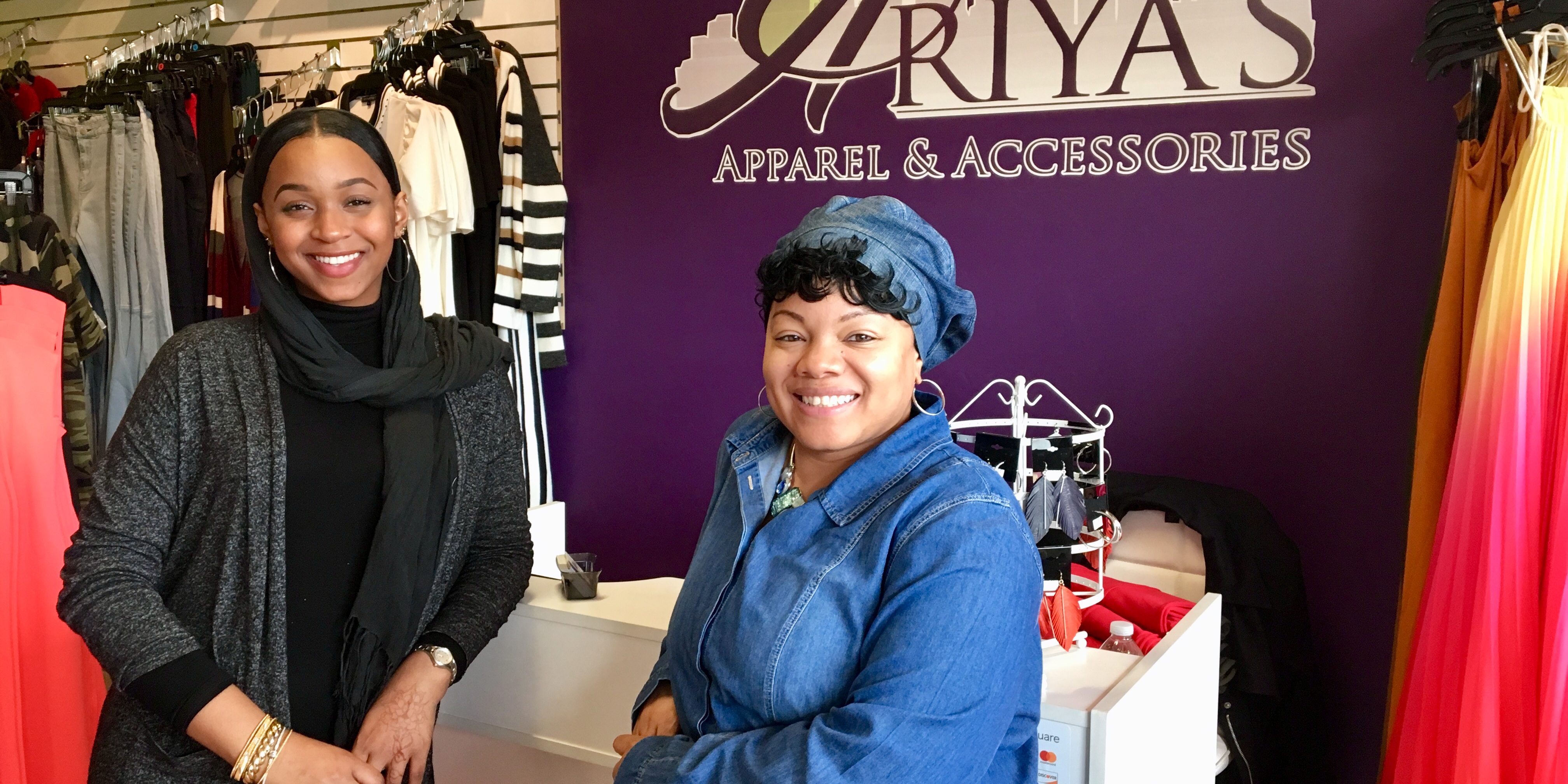 Sometimes, despite a lot of preparation, education and practice, one still needs a little encouragement to do something daring. Making the step from a mobile business to a brick and mortar location, even if it’s only for a few months, was a step Akeya Muhammad was reluctant to make. Luckily for her, GRDC’s Economic Development Specialist BrieAnn Bell had seen Akeya pitch her business idea, and BrieAnn knew right away that Akeya was ready for the next step and that her business, Ariya’s Apparel and Accessories, would be a great fit for the Grand River WorkPlace pop-up space.

BrieAnn saw Akeya’s enthusiasm and careful preparation at TechTown’s Retail Boot Camp Pitch Showcase the fall of last year. Akeya was so well prepared, she was one of the winners of the Pitch Showcase. Akeya had completed TechTown’s 10-week Retail Boot Camp and the Build Institute’s class for small business owners. Akeya had already participated in several vendor shows around town, and had developed a following. According to Akeya, it was always her dream to “own my own clothing store. I have always loved fashion.” And yet, she hesitated. Former WorkPlace Pop-up Shop business owner Nicole Bien’Aime of Voluptuous Bien’Aime Boutique introduced Akeya to BrieAnn as a means of encouraging Akeya that not only was she ready to open up in a brick and mortar spot, but that Grandmont Rosedale might just be the right place to do that. After all, Nicole had done so well at the pop-up space, she opened her own spot in Grandmont Rosedale at 19326 McNichols.

APPLYING TO OPEN UP IN THE WORKPLACE POP-UP SPOT

Upon completion of TechTown’s Retail Boot Camp program, Akeya started working with TechTown’s SWOT City consultant, Micah Louks who keeps regular hours as a consultant at the WorkPlace. Micah informed Akeya that the Grand RIver WorkPlace was accepting applications for the retail pop-up space. “What if I’m not ready?” Akeya asked Micah. Micah told her it wouldn’t hurt to apply. “Just go through the process, then see if it works.” Akeya applied and was called into the WorkPlace for an informal meeting before the official interview, just to check things out. That informal meeting with BrieAnn turned into an interview with GRDC’s Economic Development Manager Ian Watts as well, and the three agreed that Ariya’s Apparel and Accessories would be the next business in the Grand River WorkPlace pop-up space.

Ariya’s Apparel and Accessories meets the need for many women who are looking for fashionable and modest clothing. Akeya found this focus several years ago as she herself was having trouble finding clothes that were “professional, modest, and fashionable.” Akeya was a banking professional and had transitioned into Islam, where there is an emphasis on modesty. She had found a few places that offered such clothes, but “obviously there was a market for more. I wanted to provide this service to other professional women.” One look around the shop and you’ll see that Ariya’s Apparel and Accessories is an upscale boutique that carries a classy, beautiful array of unique women’s clothing and accessories that can be worn to work and to social events.

Akeya has settled in nicely at the pop-up space. She continues to seek guidance and education about owning a small business. Nicole continues to be a great support, “I learned a lot from her,” Akeya says. “She told me what to expect and how to plan. She’s been a great sounding board.” Akeya finds her space in the WorkPlace a great place to learn how to run a storefront. It’s close to home and has several ongoing business support services readily available. She has a part-time sales associate, Alasia Muhammad. Akeya had a successful Open House, and by all appearances knows a great deal about owning a successful small business. Akeya will continue to consult with SWOT City as she continues to grow her small business.