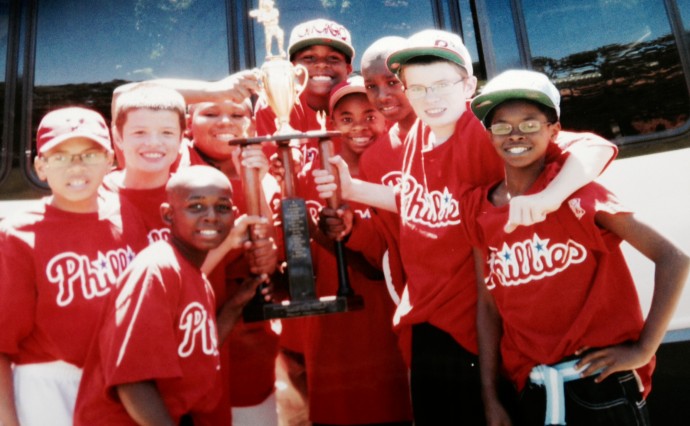 For its first two seasons, from 1990-1991, Grandmont Rosedale had two baseball teams:  one T-ball team and one coach-pitch team.  These two teams played in the Livonia YMCA League.  After a season-ending trip to a Tiger’s game and a picnic in 1991, several parents believed that there was enough local interest for Grandmont Rosedale to start its own league.  They were right:  In 1992, 300 kids signed up to play ball in the newly established Rosedale Grandmont Little League.  The league has been continuously chartered by Little League Baseball since 1994.  Each year until about 1999, more and more kids registered until the league reached its peak at 530 boys and girls, where it has remained since.  That’s not just an impressive number; it also indicates the amount of organization and involvement that is needed to facilitate such a large league. In fact the people who did this organizing and facilitating are still doing it today.  Mary Schneider and Cheryl Montgomery have been in charge of registration and the bookkeeping since the beginning.  Steve Spencer, Jim Dwight, Ray and Leslie Martin, and Chris Webb have been with the league for about 20 years doing everything from coaching, to ordering uniforms, to umping, to grilling hot dogs for the concession stand.

Two of the league’s founders and stalwart organizers are Commissioner Frank Lanzilote and Ken Schneider.  On any given Saturday in May or June, you’ll find them at Stoepel Park, not just making sure that the league is running smoothly, but coaching.  Their kids are well beyond the 16 year age limit of the league, but they both continue to coach because they really love the league and the game of baseball.  And that’s really what the league is all about.  It’s just fun to play baseball.  In Little League, all the players get to play.  In Rosedale Grandmont Little League there’s a deep commitment to teaching the kids the game.  No two innings are alike, and no two hits are alike, so it takes a lot of careful coaching to get the players to the point where they know what to do when the ball comes their way.

After the regular season is over, players in each age group can try out to be on an all-star team that represents Grandmont Rosedale in a district-wide Little League tournament and play all-star teams from other area cities.  RGLL teams have always fared well in these tournaments, and have even produced several district champions.

In fact, the careful coaching and competitive spirit have led to “dozens of boys and girls to play college ball,” according to Ken.  A couple of our kids have even been drafted by the major leagues.  You never know where an idea born at a picnic after a ballgame might lead.  As Ken says, “One day we will fill up buses to see one of our kids play in the Bigs at Comerica Park.”

Click here to watch a GRLL video, produced by Three Lyons Creative, features players, parents, and coaches talking about why the Rosedale-Grandmont Little League is a neighborhood institution like no other.

To register your 3-16 year old, go to rosedalegrandmontbaseball.org.