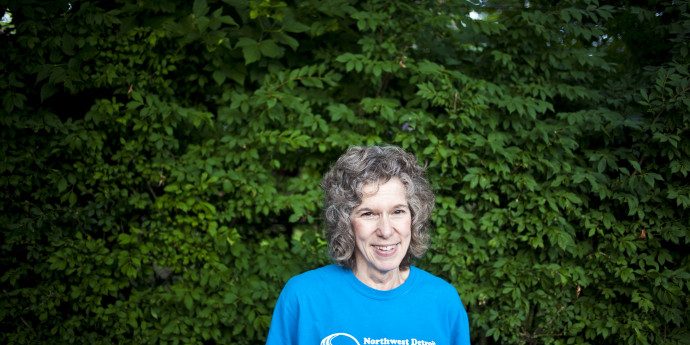 Long-time GRDC staff member Pam Weinstein will retire from GRDC at the end of 2013. For 13 years, Pam has played a key role in many of GRDC’s most successful programs.

“Pam has been a big part of GRDC’s history and has contributed so much to the Grandmont Rosedale communities,” stated Executive Director Tom Goddeeris.  “She took on a wide variety of projects and always did an excellent job with every new challenge.”

In her first years with GRDC, Pam organized volunteers and coordinated a number of special projects, most notably the Neighborhood Preservation Program in the Minock Park neighborhood.  Pam helped this neighborhood reorganize its association and install neighborhood signage and dozens of front yard lights.

Next, Pam took on the challenge of coordinating GRDC’s  commercial revitalization activities along Grand River.  The centerpiece of these efforts was a façade matching-grant program that directly assisted local small businesses with upgrading the appearance of their storefronts.  Architectural designs were provided for free and the construction grants were provided on a dollar-for-dollar matching basis.  In all, a total of 38 grants were made, more than in any other community in Detroit.

Pam also led efforts to implement a Michigan Department of Transportation-funded $1.3 million dollar streetscape improvement project along Grand River that resulted in new sidewalks, street trees, decorative cross walks, and landscaping.  She acted as a liaison to the City Public Lighting Department as they planned and installed a complete lighting upgrade along Grand River.

Pam will also be remembered as the founding Market Master for the Northwest Detroit Farmers’ Market.  Under her leadership, the Market has been a popular neighborhood institution for the last 8 years and is viewed as a model for other neighborhood-based markets to follow.

Her other duties included editing the UPDATE, GRDC’s quarterly newsletter, and producing the weekly GRDC “eblast,” keeping Grandmont Rosedale residents and other supporters informed about  neighborhood events and activities.  Organizing the Grandmont Rosedale Community Garden and assisting with fundraising were also Pam’s responsibilities.

All of this work for GRDC has been in addition to Pam’s active role as block captain, board member and neighborhood activist in the Rosedale Park neighborhood where she has lived for 29 years.