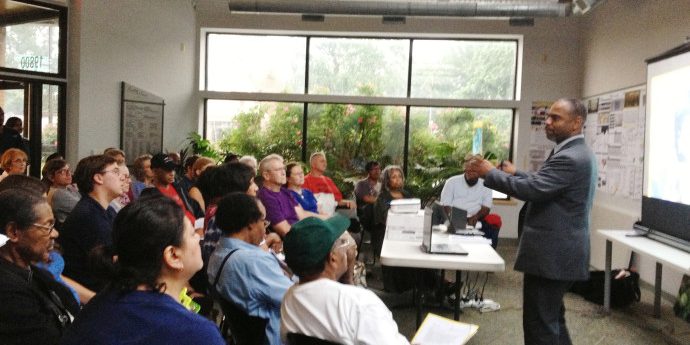 Despite the downpour of rain, Monday night’s Radio Patrol Workshop had a fantastic turnout of fifty-seven people. The event was the result of collaboration between the Detroit Police Community Services Department and the Grandmont Rosedale Community Security Program.  Though the majority of those who attended came from the Grandmont Rosedale area, there were many who came from other areas of the city, including Highland Park, Parkland and even Madison Heights. The workshop was structured to recruit new patrollers, and Sergeant Shirley Joiner and Investigator Brian Fountain offered engaging presentations that both explained why radio patrol is an effective crime deterrent, and offered a litany of practical tips for civilians on patrol. As a result, ten new resident volunteers filled out applications for Radio Patrol at the meeting!

Though the room was warm, and there were not enough chairs in the building to seat everyone, the audience remained attentive and engaged throughout the entire workshop. One participant stated that the workshop was, “Very informative.” and that, “Inv. Fountain has a wealth of useful information and presents in a well-organized manner.” When asked if the workshop would impact them personally in any way, another participant replied, “Absolutely! I will be more involved in my community.” It was another exciting example of the capacity building that occurs when the Police and the community come together!

If you were unable to attend the ‘Citizen Radio Patrol: An Essential Part of Community Policing Workshop’, a copy of the presentation can be found here: CITIZEN BAND RADIO PATROL PROCEDURES.  Also, ‘What to Look for – How to Report a Suspicious Vehicle or Person’ document can be found here: SUSPICIOUS VEHICLE AND ROSTER GUIDE 2013. The document contains helpful tips and characteristics to look for when reporting a vehicle or person connected to a crime or suspicious behavior.