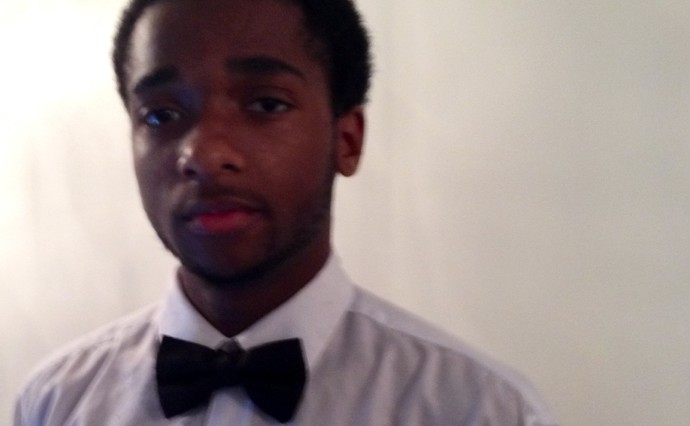 Minock Park resident Anthony Cheatham, 16, is a thinking young man, a young man who pays quiet attention and then, seemingly effortlessly, figures stuff out.  Last summer Anthony participated in the GRDC’s Youth Summer Arts Program.  This was not Anthony’s first venture into art:  “I’ve done art since I was a little kid.  I’m good at it.  I figured I’d give it a try.”  This matter-of-fact attitude reflects Anthony’s thoughtful reserve which produces impressive results in his artwork, his knack for handling younger kids, and his mechanical ability.

His artistic interests and experiences broadened in the summer arts program.  He thought the pottery project was “fun,” and also particularly enjoyed the stained glass, and bracelet projects.  His favorite field trip was to the Heidelberg Project which, until last summer, Anthony “didn’t know was there.”  Last summer Anthony also revealed an ability to garner the respect of the other kids in the arts program, specifically the younger, sometimes less than attentive kids.  Anthony modestly shrugs when asked about this gift: “I take my time.  I make sure they’re having fun.  They listen to me.  They just calm down.”  The sincere attention Anthony showed the kids is second nature to him, which is probably why the kids responded to his leadership.

Anthony could have learned this quiet guidance from his uncle, who, when Anthony was 9, showed Anthony how to change the brakes on a car.  Along with this lesson on teaching by doing, Anthony also learned that he had an unusual understanding of all things mechanical.  Most of the toys he got when he was a kid, Anthony immediately took apart.  Unlike a lot of kids, Anthony could also put them back together again.  This ability to understand how things work has moved on to other, more complicated things.  Family, neighbors and friends regularly ask Anthony to help them switch out hard drives, and update software on their computers.  Anthony has learned all of this on his own:  “I’ve learned by doing, by working with the computers and figuring it out.”  Improvisation is also part of Anthony’s repertoire.  “I can fix radios, mini-bikes, lawn mowers, anything with an engine.  If a part isn’t working or is broken, I improvise.  I haven’t been stumped yet.”

Not surprisingly, Anthony would like to study architecture, the perfect combination of  his interests in art and engineering.  He would like to study architecture in college, but also learn a trade.  One day he’d like to have his own architecture design business where he could build his ideas.  For now though, Anthony is focusing on a new interest in music and is figuring out both the guitar and his new electronic piano, a gift from his mom.  He’s learning to play both on his own, but is sorely tempted by the piano.  He’d really like to take it apart, and is “pretty sure” he could put it back together again, but he’ll wait.  He admits that his habit of taking things apart and putting them back together sometimes makes his mom more than a little nervous.