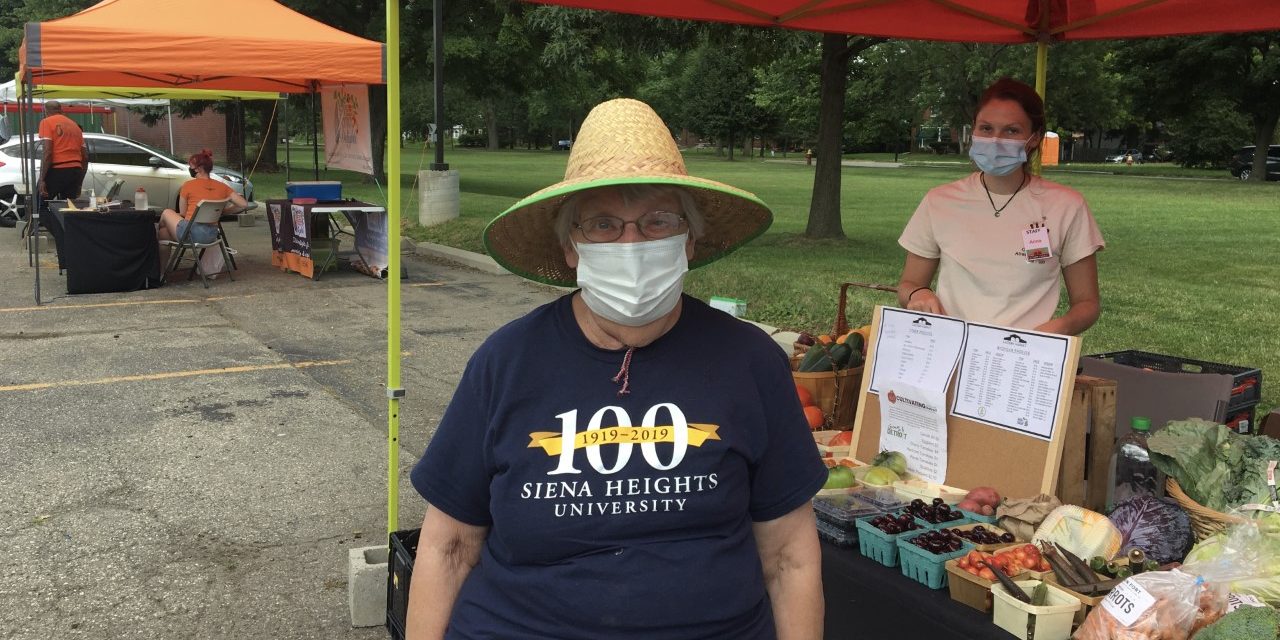 Just about every Thursday, right when the Northwest Detroit Farmers’ Market opens, you’ll see Anneliese Sinnott make her way from her home just across the street from the North Rosedale Park Community House grounds. She’s often the first one there. When the 2020 Market season began, it was curbside pick-up only, and there Anneliese was with her cart for her groceries and a chair so she could wait comfortably while her grocery box was packed. She often brought a magazine to read while she waited.

Anneliese has been a regular Farmers’ Market shopper for years. She likes the convenience and the variety: “It’s great!” she says, “the Market has what I need and some things I want.” Anneliese shops for herself and her housemate Cheryl, another Dominican nun.

BECOMING A PROFESSOR OF THEOLOGY

Originally from the South Side of Chicago, Anneliese attended a Dominican high school where she was taught by several Dominican nuns. “It seemed like a pretty happy bunch,” she remembers. She began the process of becoming a Dominican nun herself right after high school.

Over time, Anneliese became a professor of theology, teaching at the Ecumenical Theological Seminary in Detroit for years. She has taught a basic course in theology, “Women in Theology,” “Theology in a Multi-Cultural World,” and has “enjoyed teaching them all.” Anneliese has served as the dean, continues to teach free online courses about “Holy Women of History” to anyone who is interested, still sits on the board at Sienna Heights University in Adrian which is where the mother house is, and the Mercy Center board in Farmington, and she shops just about every Thursday at her neighborhood Farmers’ Market.

Anneliese has lived in Grandmont Rosedale since 2002. She and several other Dominican sisters had moved to Grandmont Rosedale after the church where the rectory they were living in merged with another church. The church and rectory were sold so Anneliese and four others had to find another place to live. They women wanted to stay in Detroit, ideally not far from where their church was, but they found nothing that suited their needs and budget. They knew that their choir director, Maurice Dewey, was a Grandmont Rosedale resident and they knew that Grandmont Rosedale was a stable neighborhood not far from where they were lived on West Chicago. Maurice did not know of any houses available so the women rented a home in Dearborn. They signed a three year lease, but after just one year, the family that owned the home came back to stay and once again the women had to find a place to live. Maurice had begun to think of moving to Florida. Instead of selling his home, he rented it to the five Dominican nuns. The women were quite happy in their new home and hoped to stay. After 8 years Maurice sold the home to someone who bought the house as an investment rather than as a place to live. Maurice agreed to sell only after getting the new homeowner’s assurance that sisters could stay.

COMMUNITY AS A CALLING

The vision statement of the Dominican order includes the intention to “seek truth; make peace; reverence life…rooted in our contemplative prayer, communal study and life in community, we challenge the heresies of local and global domination, exploitation, and greed that privilege some, dehumanize others and ravage Earth.” In a small but important way, by supporting her very local farmers’ market, Anneliese, and all of us, are doing just that – rooted in community we work toward making our community a place where everyone is valued, needed, and welcome.

Stop by your Northwest Detroit Farmers’ Market on Thursdays from 4 – 8 pm through the second Thursday of October at the North Rosedale Park Community House, 18445 Scarsdale. You can like the Market on Facebook, follow us on Instagram, and if you have a Market question, contact Market Manager Lauren Patterson at nwdfm@grandmontrosedale.com.